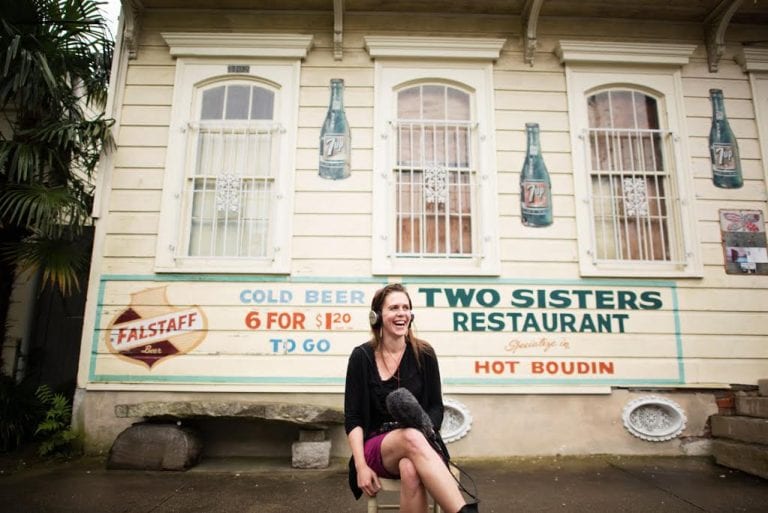 Eighteen months ago, Pop-Up Magazine invited Peabody Award-winning radio producer Tina Antolini to step out of the studio and go on tour telling stories in front a live audience. Pop-Up Magazine is a live performance that brings original, true reported stories to cities across the country. There are no cell phones or recording devices allowed, just 10 to 12 contributors, artists, the Magik*Magik Orchestra and the audience. Sunday’s performance at the Variety Playhouse is the last stop for the Winter Issue tour.

Antolini, who was a producer on NPR’s State of the Re:Union and is producer/host of the Southern Foodways Alliance Gravy podcast, was excited by this new storytelling medium where people had a communal experience of journalism. For her piece, she decided to tell a story about a phone number that people could call to get the answer to any question. Over the course of the piece, she talked about the regulars who would call into that number.

“The number actually still exists, but now it’s being used by those that the internet left behind,” Antolini said. “Prisoners write letters in all the time. There was a guy who wrote in asking for help finding a prosthetic leg after being in prison for 50 years. Another guy wrote in trying to find his mother after being estranged from her for 20 years, and the person looking for the information actually found her in the California death record, and needed to write the guy what had happened. The piece starts out pretty light and then takes a turn to more emotional work.”

The experience moved Antolini so much that she went to work for Pop-Up Magazine as a senior story producer. Like a traditional magazine, there are different stories in every tour, some shorter front-of-book-like pieces and deeper features, and the stories are fact-checked. The difference is that the stories are enhanced by multimedia artists, dancers, illustrators and original music. Winter Issue contributors include Brittany Luse and Eric Eddings, hosts of Gimlet’s The Nod; Jon Mooallem, writer at large at New York Times Magazine; novelist Daniel Alarcón; Rose Eveleth, the producer of the 30 for 30 podcasts; TV writer Cord Jefferson; Albert Samaha of BuzzFeed News; filmmaker Veena Rao; and Rolling Stone writer Brittany Spanos. There will also be two local contributors, essayists Ben and Rhonda Partain, who tell a personal story.

Antolini says that one of the challenges of not recording the show is explaining it to people, but that more than anything they try to create something audiences have never experienced before.

ArtsATL: What inspired the creation of the Pop-Up Magazine show?

Tina Antolini: Our editor-in-chief Doug McGray had been a freelance magazine journalist and had also filed stories with This American Life on the radio. He and some other friends started talking about how they worked in different mediums — documentary films, radio, magazines — and there was a desire for them to make something together. There were film festivals where all the filmmakers hung out, but nothing where they could collaborate across mediums. In the world of magazine journalism, you don’t have the equivalent of theatre, so the original Pop-Up Magazine was an experiment among friends, who put on the first show in a bar, and then it was so popular it went to bigger venues.

ArtsATL: How has the concept of the show changed since its inception?

Antolini: There wasn’t a defined notion of how to make a journalistic story live, so it keeps evolving. There are other programs out there that do live storytelling really beautifully, like The Moth and TED Talks. Pop-Up Magazine approaches it in a different way because it’s taking reported stories and melding them with the world of performing arts. So, we have collaborations between journalists and musicians, radio producers and illustrators. For example, in the Atlanta show there are a couple of interactive moments with the audience — a “choose your own adventure” part where the audience gets to choose which direction the story will go in and a musical moment.

ArtsATL: What makes a story worthy of being performed in front of a live audience?

Antolini: To some degree, we’re looking for the same things that are hallmarks of a good story anywhere — something that moves you, makes you laugh, is really beautiful sonically, but is also a good story. Part of what connects with people, is a story that makes you recognize something in a character that expands your sense of the world. That’s what we’re always looking for.

ArtsATL: How do you go about selecting the stories and the performers?

Antolini: We spend several months building the show from the ground up. It usually starts with the producers reaching out to people whose work we admire, who are doing interesting journalistic work in the world. We ask them what they’re interested in, and what they’re already working on that might adapt well to the stage. We try to have a diverse group of mediums and contributors. We’re looking for a range of emotional notes for the show to hit, from funny to moving, so that’s in our minds as we’re trying to puzzle piece a show together.

ArtsATL: How do you go about rehearsal?

Antolini: We basically do read-throughs on the phone with contributors, and we have them record themselves reading, and pair that with the art. Then, usually the day before our first performance, we’ll be in a hotel room reading through a show with somebody. Then, on the day of the show, we run through it as many times as we can in the time that we have. We try to do everything we can do long distance, so that we have everything as tight as we can when we land in a place and it’s time for it to come to life. It’s a little bit of a high-wire act.

ArtsATL: I want to talk a bit more about the idea that you have to be there, [that] nothing is recorded. What went into the thinking behind the pop-up nature of it?

Antolini: The in-the-moment-ness gives the whole production a different energy. The audience pays attention to it differently, they experience it differently. You can’t just go home and watch it online. Also, all of the stories are original unpublished work, so we get people to tell stories for our show that might be a part of something they’ll do later.

ArtsATL: What do you want to see Pop-Up Magazine become?

Antolini: I hope that we will be able to bring the show to more cities. When I came on staff, I was excited about bringing the show to cities in the South and in the middle of the country. We also have an experiment we’re working on called Pop-Up Zine that’s essentially us putting together a toolkit to help people do a smaller, more approachable version of this in their community. Hopefully, the first one will happen this year.

ArtsATL: For someone who is seeing Pop-Up Magazine for the first time, what would you tell them to prepare for the experience?

Antolini: Be ready to be surprised. You don’t need to bring anything. Just come ready to have an evening full of laughter, and maybe a few tears, but the good kind. The first show I saw, I was blown away. We really just want to have the audience feel like they’ve been transported somewhere. That’s what we’re after.