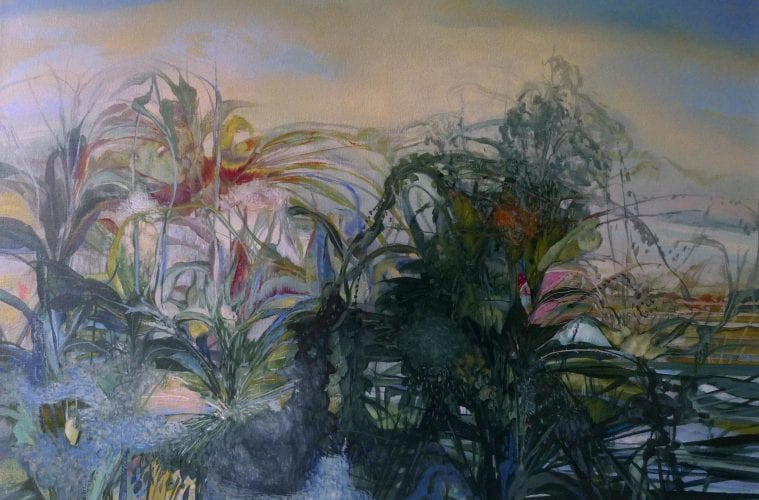 I’ve long been fascinated by the paradox of the several literary and artistic movements defined as romanticism. Whether in England or Germany or elsewhere in northern Europe, the romantics somehow combined a passion for landscape and local history with a deep longing for things lost and irrecoverable, with this fragile attitude sometimes alternating with equally deep sarcasm or skepticism. It was a sensibility brought about by a time of great social and political upheaval, when everything was in question and all outcomes were in doubt. Robert Rosenblum’s 1975 book Modern Painting and the Northern Romantic Tradition: Friedrich to Rothko remains a key text for me with regard to the origins and the later legacy of the romantics.

I bring all this up because three exhibitions currently at Atlanta galleries touch on quintessential romantic themes in ways that reflect the range of the romantic paradox.

Corrine Colarusso’s Light & Weather, at Poem 88 through February 24, continues this long-established Atlanta painter’s dialogue with the painting of nature and the nature of painting, a dialogue conducted by the creation of luminous imaginary landscapes. The scenes aren’t impossible — in fact, the foregrounds of densely packed plant life, through which sky and the land beyond are vaguely visible, form depictions of nature that will seem familiar to most of us and yet unfamiliar as well. The unfamiliarity comes from the fact that the images are worked out according to the logic of composing a painting, not necessarily beholden to literal details of the plant life they resemble. This interweaving of pure imagination with the light and weather that surround us is one of the distinguishing features of the romantic temperament; the works are simultaneously emotionally involved and analytical, and this, too, has analogies in earlier romantic art. The overall effect is a sensation of instability and uncertainty, which is as romantic a condition as you can find in these inevitably cynical times.

The romantics sought to outmaneuver the cynicism of the preceding century’s enlightenment philosophy by finding significance in emotional attachments to objects and environments, as well as in what they saw as the uncontaminated insightfulness of children. These are habits of mind that have carried into the present day without any direct influence from the work of the romantics, and some remarkable examples of this can be found in the work of four of the six photographers in the Atlanta Photography Group gallery’s Portfolio 2018 show juried by Sam Barzilay, open through March 17. Illinois photographer Vanessa Filley’s portfolio A Nursery Rhyme uses unsettling tableaux in eerily evocative architecture to offer to her daughters “a little bit of the magic I longed to have brought into my own childhood . . . [while] trying to impart an honest sense of the world we live in today. . . . Every fairytale has a dark side.” Fayette County resident Dale Niles places family heirlooms in new, disturbing contexts in Solidifying Roots, a body of work that recalls surrealist predecessors while being thoroughly romantic at its core in its depth of attachment to a past that can neither be abandoned nor brought comfortably into the present. Kasey Medlin, an Atlanta photographer, brings more of a surrealist sensibility to Blush, although there is something romantic about the sense of something hidden behind mere appearances in these memorably composed, spontaneously captured vignettes. Marietta-based photographer Cherie E. Truesdell returns us to the realm of displaced fairy tale in Dirt, an uneasily surreal excursion into allegories in which women are literally embedded in the rich soil of improbably lush flower gardens. The exhibition leaves the world of romantic psychology for the grittier “private apocalypses” of working people whom Michael W. Hicks casts as film noir characters in No Man’s Land, and Atlanta photographer Erin L. Scott’s 3 Feet High and Rising similarly offers a documentary glimpse into the world of African American teenagers in Baltimore City. Although they are unrelated to the theme of romantic sensibility I’m following here, it’s easy to see why Barzilay found them compatible with the other portfolios in one of the most intelligently juried exhibitions I’ve seen in recent months.

The theme of grittier sensibility leads us to the singularly transgressive exhibition in this roundup of romanticism, a show that hasn’t opened yet, but one that, since it will feature a major installation that will only be on display opening night, is worth considering now.

Christopher Hall’s two-part exhibition All That Is Holy and The Infinite Absurd opens on March 2 at Blue Mark Studios. All That Is Holy, curated by Hall and running through April 28, features work by Atlanta artists Rose M. Barron, Daniel Biddy, Elyse Defoor, Deborah Hutchinson, Charity Lindop and Robert Sherer, and is described as offering an unconventional perspective on spirituality — a statement that, given my knowledge of the previous work of these artists, I am prepared to take on faith. The Infinite Absurd, Hall’s one-night solo exhibition of his own work, premieres an immersive sound piece and the first-ever presentation of all 1,355 of his ink drawings, a mingling of irreverence and mysticality in which it becomes impossible to decide which is which.

Hall writes of his project, “The Infinite Absurd meanders between moments of unexpected humor and deep reflection and is composed of everything from television commercials, cartoon samples, ambient soundscapes, Christmas carols, and UFO eyewitness testimony, all woven together in a loose narrative that suggests a life’s journey, a yearning for peace, and Buddhist principles surrounding death and rebirth. [The drawings recall] Tibetan Prayer Flags, the ribs found in the ceiling of cathedrals, and the flags flown above used car lots and at carnivals.”

This agenda recalls the dictum of the German romantic (or quasi-romantic) poet Heinrich Heine that the artist works into the material of religion as though it were bronze — a fluid medium (under the right circumstances) from which something new and solid can be cast. The results with Hall, as they were with the romantic poets whom Heine had in mind, are outrageously serious and seriously outrageous by turns. Some of the artists in the show Hall has curated are, likewise, more often disturbing than haunting, but others share the spirit of passionate exploration of the unknown and mysterious territory that Rosenblum wrote about.