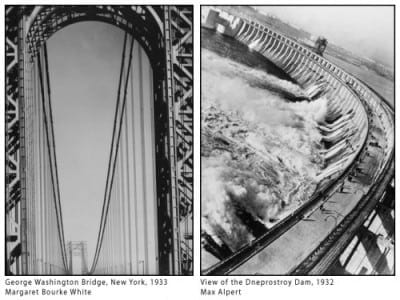 Review: Alluring and illuminating “Photography as Propaganda” at Lumiere

What countries could be more different than the Soviet Union and the United States during the first half of the 20th century? Yet, as suggested by Lumiere’s illuminating “Photography as Propaganda: Politics and the Utopian Dream,” many of their ideals and fantasies were actually alike, and so were the images that served their goals and cultural values.

Inspired in part by “Propaganda and Dreams,” the 1999 exhibit at the Corcoran Gallery of Art in Washington, the exhibit opens with pictures by American and Soviet photographers celebrating technology and the built environment. Margaret Bourke-White’s “George Washington Bridge” (1933) and Berenice Abbott’s “Night View, New York” (1932) sit alongside contemporary photographs of the Dneprostroy Dam and Kherson Shipbuilding Factory by Max Alpert and Simon Fridland, respectively.

The photos were produced in divergent contexts with quite different aims. Bourke-White worked for the capitalist Henry Luce’s Fortune as well as Look magazines, creating photos that seemed almost to advertise the romance of commerce and industry. Abbott worked independently in the 1930s on her “Changing New York” series, promoting a view of urban planning that she continued under the sponsorship of the Federal Art Project. Fridland and Alpert documented Soviet manufacturing and engineering for government news platforms such as ITAR-Tass, Izvestia and Pravda, constructing the not entirely accurate impression that the young, impoverished nation was heading full steam into the 20th century. Despite these differences, however, the photos share an almost palpable optimism about technological modernity and its culture of speed and mechanization.

The geometric formations of bodies in Alexander Rodchenko’s “Male Pyramid” (1936) or Georgi Zelma’s “Physical Culture Demonstration, Red Square” (mid-1930s), which celebrate ideals of collectivity and athleticism, point toward the subsuming of the individual into what Weimar-era intellectual Siegfried Kracauer called “the mass ornament.” The pairing of John Gutmann’s 1937 photograph “Archers, Spelman College,” commissioned by a Dutch magazine for an article on life in the American South, with Ivan Shagin’s “Sports Parade, Red Square (1932)” highlights how “mass ornament” figured in democratic as well as totalitarian societies. Similarly, the juxtaposition of Dorothea Lange’s “Migrant Mother” (1936) and Rodchenko’s “Pioneer Girl” (1930) reveals how even an individual in a portrait can recede into an abstraction of ideals about patriotism, the common good or heroism.

His “Elevator Garage, Chicago” (1936) might seem at first to share the veneration of machine culture we find in Abbott, Bourke-White and their Soviet counterparts. Shot from below with a Rolleiflex camera held at the waist, the photo of a pillar of automobiles stacked upon one another advances a certain degree of optimism about American capitalism and democracy. Yet the monotony contained in the image of car upon car rising almost out of sight might also be a wry commentary on American consumerism and conformity, showing how photography can be used just as compellingly to chip away at propaganda as to disseminate it.

Through November 5. “Politics and the Utopian Dream” will be condensed to make room for “Messages From the Wilderness,” Part 2 of “Photography as Propaganda,” which will open November 12.