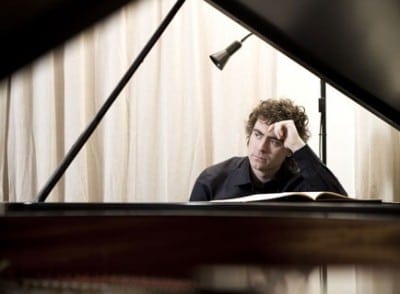 Spivey Hall, a bastion of uncompromising classical quality and one of the most conservative arts institutions in Atlanta, opened its 20th season Sunday afternoon with its aesthetic of high quality and cultural sobriety in place.

Before British pianist Paul Lewis began his all-Schubert recital, Spivey’s executive and artistic director, Sam Dixon, offered welcoming remarks, including big news for local piano mavens: a new Hamburg Steinway from the factory in Germany will soon be selected and shipped to Atlanta. And, thoughtfully, Dixon added a reminder about when the audience should applaud during the recital. His message was clear: follow the rules and we’ll all enjoy paradise.

About 25 miles to the north on the same weekend, at Symphony Hall, Mei-Ann Chen conducted the Atlanta Symphony Orchestra in a program uneven in delivery but exuberant in its multiculturalism. Here the message was clear, too: the gates are open! Everyone’s welcome.

In the past few years, largely through introspective and lucid recordings of Beethoven, Lewis has hoisted himself into the top leagues among living pianists. At Spivey he played with liquid singing tone and a nonchalant command of mature Schubert. In the four Impromptus (D. 935), detail after detail caught the listener’s attention: the dark energy coiled into a trill in No. 1; the shape of each arpeggio in No. 2; the progression from moody and internalized in the opening work to bold and declarative in the final Impromptu.

He was playing the old girl named Emilie: the nine-foot Steinway D piano from Emilie and Walter Spivey’s living room, which is worn out from decades of use, brittle at the top and with an uneven pedal. But Lewis’ sound was large and hearty — you could imagine having a few beers with him after the recital — while also intimate, considered, polite. He made vivid the six parlor pieces known as “Moments musicaux” (D. 780). I’ve never heard these clever, sometimes soulful, works fitting together much as a set; they always seem like an assortment of miniatures, none benefiting from proximity to the others. Lewis seemed to highlight inner ideas, making connections but never in a forceful manner. For once, they seemed properly of a group.

Schubert’s “Wanderer” Fantasy, a large-scale sonata compacted into one engulfing movement, showed Lewis as a pianist of boundless range and insight, carrying us along with the storytelling and sculpting the small moments. His encore, an Allegretto in C minor, came from the opposite end, a lovely little song offered without fuss, for our pleasure. Lewis is an understated master — very British, that.

Mei-Ann Chen served as the ASO’s assistant conductor for two years and had been back once before as a guest on the podium, in a memorable evening a few years ago with off-the-grid violinist Nadja Salerno-Sonnenberg. On Saturday night I caught her second visit, an interesting program. As before, Chen works very hard with the orchestra. She is demanding of herself and a little showy in her gestures. Winningly, she likes to make the concert feel like an event.

The program opened with Michael Abels’ “Global Warming,” whose title comes with even more political baggage today than when it premiered in 1991. But beware of titles: if not told in the program notes what the various sections are supposed to be about — described in this preview article — a listener might hear it as an American composer’s boisterous paean to folk music.  The solo violin and cello in the opening evokes the Mississippi Delta blues, which leads to an Irish jig, complete with a Celtic bodhrán drum. The full orchestra picks up the tune as it gradually slips into an Indian raga, with tabla drums and a South Asian modal feeling, which felt wonderfully fresh (and raised the question, who are India’s leading composers?).

Chen had the orchestra smokin’ hot for Ravel’s G Major Piano Concerto, pushing the first movement at a good clip and playing with the jazzy rhythms. The soloist, Terrence Wilson, kept up with the notes but not with the spirit. He glided across the surface in the Mozart-inspired slow movement, although they all came together with a robust and showy finale.

For Saturday’s performance, Chen conducted Cesar Franck’s D minor Symphony from memory and without mishap. She pushed and tugged at the phrases, trying to wring out as much of the music as the orchestra would let her. She also gave the orchestra a heavily Germanic vibe. It wasn’t light on its feet, and the brass tended to blare unchecked. But Chen’s reading was comprehensive and loving, and she pulled from the orchestra an infectious sense of shared discovery, as if they were learning a 122-year-old classic for the first time.

Under tight rehearsal and performance schedules, and with every minute accounted for by union contract, American orchestras don’t play encores at weekly subscription concerts. It’s a pity for a lot of reasons, especially because it eliminates an easy means of spontaneity. With interpretations generally standardized and with audience behavior scripted (see Sam Dixon’s comments above), symphony orchestras have few meaningful opportunities to respond at the moment to the people buying tickets and listening.

So, although the encore Saturday night was planned and thoroughly rehearsed, it seemed to bring as much joy to the audience as everything that preceded it. Chen and the orchestra dashed through the four-minute “Saibei Dance” by An-Lun Huang, a composer living in Toronto, as if it was a Chinese cousin to Dvorak’s “Slavonic Dances.” The music is bright and cinematic, folksy, pentatonic and fit for a picture postcard. The crowd adored it.