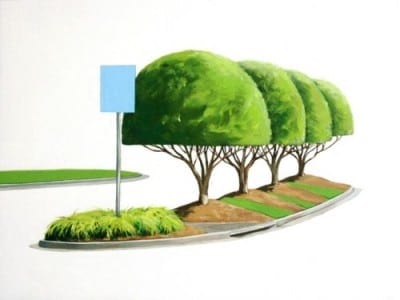 Review: “After the Suburbs” at Kiang Gallery a trenchant look at nature/culture divide

The challengingly punctuated “… After the Suburbs: artwork from the post-cookie-cutter landscape” at Kiang Gallery is as provocative conceptually as it is typographically. The exhibition, curated by Karen Tauches, is meant to stir up thought about the suburbs’ present condition and possible futures, doing so through art that presents “visual tropes of the suburban mythology and lifestyle.”

The show is metaphoric (the shorthand “visual tropes”) and lyrically poetic, not didactic — even though reference books are on a shelf on the premises. Tauches’ basic thesis is that “Ideally, [the suburbs] can evolve into a less commercialized hybrid of urban and green space.” The work in “… After the Suburbs,” however, deals with the whole cycle of urban density and suburban flight. Some of the best pieces are not about the suburbs at all, although they give us a dialogue between nature and culture — or greenery and architecture — both in the United States, where suburbanization has come full cycle and is turning into something else, and in China, where urbanization has only recently been supplemented by the lifestyle of upscale suburban living.

Sze Tsung Leong’s photographs of neighborhood demolition in Beijing show urbanization firmly on an upward curve, as human-scale housing is replaced by immense high-rises. Showing the other side of housing in today’s China, Danwen Xing’s Photoshop-created image of an idealized suburban house places real people in the disconcertingly artificial environment of a scale model of a dream home, in a developer’s sales office.

American cities and suburbs are at a very different phase of the overall cycle. Even though they depict hurricane damage rather than urban decay, Michelle Levine’s paintings of wrecked McDonald’s signage in Louisiana might be taken as shorthand for the growth of urban wastelands that impelled flight to the suburbs for earlier generations. (The wastelands have now spread to certain suburbs, but that’s another story.)

Today, suburbs still signify a safe and predictable environment for many Americans, and Meg Aubrey’s little paintings (at left) focus on the iconography of that predictability: neatly trimmed trees on a roadway median, a red brick mailbox, a red shopping cart at the edge of a mall parking lot, and a “For Sale” sign, left generically blank in Aubrey’s rendering. (The theme of the mall parking lot shows up again in this exhibition, in Kemp Mooney’s proposals for ”Reinhabiting the Parking Lot.”)

Sarah Hobbs’ surreal photographic allegory of “Avoidance,” depicting a house’s Palladian-window entry sealed off from the outside world with aluminum foil, symbolizes the suburbs as an ideal of escape from urban unhappiness. Travis Shaffer’s documentary photographs of the windowless sides of houses imply a similar exclusion of unwanted influences, even if in this case the influence is only a view of the next-door neighbors.

But the suburbs have been places of escape from city tensions for a more diverse population than stereotypes of suburban living would allow. Sheila Pree Bright’s photo of the home of a financially comfortable black family (at right) presents a picture of nearly magical tranquility that recalls Baudelaire’s “luxe, calme et volupté”: the polished dining room table glistens where it is illuminated by brilliant sunlight pouring through a curtained window. Pree Bright’s other photo in this show is likewise paradisically romantic, yet absolutely realistic: flowering trees of spring frame a view of an African-American suburban home that exemplifies the dream of quiet happiness that suburbs were supposed to fulfill, and sometimes actually have fulfilled.

Meanwhile back in the city, nature sometimes is taking over. James Griffioen’s “Feral Houses” photographs (at left) document abandoned homes in Detroit, where the one-time landscaping grows every summer to spectacularly engulfing proportions. This vision of unplanned city-and-nature harmony leads organically into Pandra Williams’ marvelous moss chair (top), an overstuffed piece of furniture where fabric upholstery has been replaced by living moss and ferns that require twice-daily misting to retain their lush tones of green. They stand in sharp contrast to Nancy Vandevender’s wall piece of ruffled flowery chintz (ironically known in the trade as “greenery”) and Drouet’s “Non-disposable flower,” a plastic blossom made from recycled water bottles.

Nat Slaughter’s soundtrack pieces of traffic and other incidental noise go almost unnoticed, not least because they often blend with actual noise from the urban street.

Interestingly, no artist in this show addresses the current transitional condition of suburbs caught by the disruptions of the Great Recession: half-finished houses where there is no landscaping to turn the scene into a suggestive image of future harmony. But as Tauches writes in her exhibition essay, the works in this already sizable exhibition only “graze the surface of a gigantic subject.”