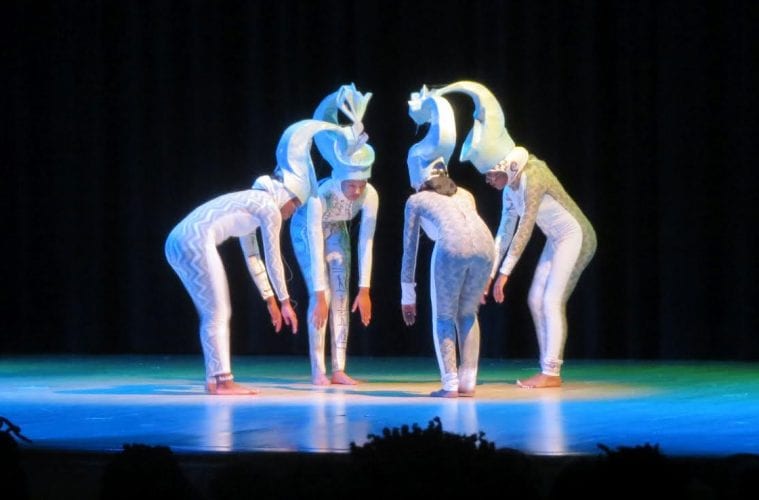 The Atlanta African Dance and Drum Festival celebrated its 10th anniversary last weekend at Sylvan Hills Middle School in southwest Atlanta. The festival’s three days of celebration and education were presented by the Afrikan Djeli Cultural Institute, an organization based in West End dedicated to promoting the art, culture and traditions of Africa. The festival featured African music and movement workshops, a craft market, food vendors, a children’s camp and a special Friday evening concert.

Afriky Lolo’s presentation of the Zaouli fable proved a colorful, engaging presentation of West African dance, drumming and folktales, highly recommended for novice audience as well as those more familiar with the cultural traditions behind it.

The piece is based on a folk tale of the Gouro (or Guro) people of central Ivory Coast, adapted for stage by Afriky Lolo’s artistic director and choreographer, Diadié Bathily. The story centers on the coming of age of Djela Lou Zaouli (danced by assistant choreographer Rokya Ouattara), when her father, the noble and powerful Lion (Derek K. Laney), ties a red scarf around her neck, symbolizing that she is eligible to be married, with the stipulation that he must approve of potential suitors.

Zaouli’s father decides that only the Bird and the Serpent meet his criteria for worthiness, and sets them as competitors in a contest to win the hand of Zaouli. They must race two days and two nights to reach her, and the first one to touch her red scarf wins. The interplay of dance, dialogue and drumming, along with exotic and symbolic costuming, played an important role. Zaouli’s colorful costume included raffia around waist, wrists and ankles, and a large mesh leotard. A headdress of cloth draped down below her shoulders. The dancer also held a cow tail in each hand. Except for a mask, her costuming was based on the traditional Zaouli dancers of the Ivory Coast.

The Bird and Serpent, danced symbolically by groups wearing relevant costumes, reached their destination only to be consumed by their own hunger and thirst, totally forgetting about Zaouli and failing to touch her red scarf and win the contest.

Heartbroken and dying of hunger and thirst herself, Zaouli ran to the forest, where she collapsed and died. The scarf was returned to her Lion father, who grieved her passing, and the whole company commemorated the memory of the beautiful Zaouli with ceremonial dance.

Although in this theatrical presentation Zaouli was danced by the female Ouattara, in the traditional Gouro ceremonial dance, the dancer is always a man who wears a Zaouli mask, with the dance and ceremonial mask being portent of prosperity for the village, as well as symbolizing unity of both the Gouro people and the nation.

In advance of Afriky Lolo’s performance of “The Goddess Zaouli” came a suite of diverse, energetic drumming by the Djeliba Drum Ensemble, a collective of percussionists organized by the Afrikan Djeli Cultural Institute’s own Aiyetoro Kamau, who emceed the concert and oversaw the festival operations at large. Huge kudos are due to the drummers in both the Djeliba ensemble and Afriky Lolo for their thrilling, virtuosic music, and equally to the dancers, who vividly brought the Zaouli fable to life on the stage.