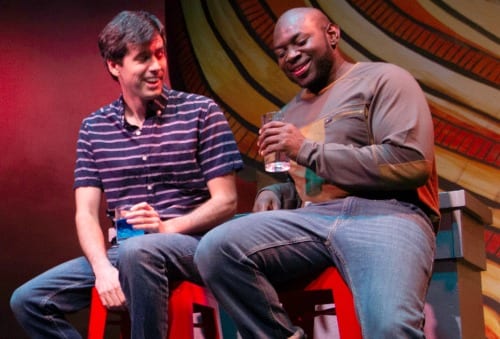 It’s fair to say Avery Sharpe is having a busy week. Not only is he performing the lead role in Black Nerd, Jon Carr’s new comedy at Dad’s Garage about the challenges of being a black man who’s into comics and sci-fi, but his own first play, Woke, opens Friday at Essential Theatre, where it earned one of the company’s annual playwriting awards for Georgia writers.

ArtsATL sat down with the actor-playwright-improv artist backstage at Dad’s Garage before showtime to talk about the ins and outs of wearing so many hats. Sharpe performs in Black Nerd at Dad’s Garage through August 4. His play Woke runs at Essential Theatre from August 3 to August 26.

ArtsATL: So you’re playing the title role in Black Nerd. Are you a lot like the character, or is the role more of a stretch for you?

Avery Sharpe: You know what? I have nerdy tendencies, but I wouldn’t say I’m a nerd. In some ways, I’ve learned a lot being in the show. Unfortunately, I’m “too cool” to be a nerd, I guess. But I’ve heard every night that this story is literally somebody’s life. They tell me it’s a little uncomfortable how close it is to their experience. It’s been really great.

ArtsATL: Is Woke your first play? Sharpe grew up in Sandy Springs.

Sharpe: It is my first play. I wouldn’t really consider myself a playwright, even though I think I’m moving in that direction more and more. I’m an actor, and I just had things come up in life. I was like, “Man, how do I process this?” A play just happened to pop up in my mind.

ArtsATL: What happened that made you feel you needed to write it down as a play?

Sharpe: I started in October 2016, right around the time of this last election. A lot of polarizing things were happening. I was having experiences with my friends or hearing conversations; people were cutting other people out of their lives. There was a lot of hate, a lot of misunderstandings, a lack of listening. That was the thing that was the most shocking to me. Nobody was really listening; we were all just talking at the same time. And we were only talking with people who were saying the same things we were. The play came out of an inquiry: How do we have tough conversations with people that we love? How do we actually listen to each other, humble ourselves and say that we don’t know everything?

ArtsATL: What happens in the play?

Sharpe: It follows two young men who are graduating high school and going into college. Then the shootings of Philando Castile and Alton Sterling happen. Their paradigms shift. They’re like family before, but their understanding of what happened — one is white, one is black — are definitely different. It follows their journey in how they basically “walk together in love” and have those tough conversations with each other and get to the other side of it.

ArtsATL: Did you grow up here in Atlanta? How did you first get involved in the theater?

Sharpe: I grew up in the Sandy Springs area. My mom is a teacher in the Fulton County school system, and my dad works in Alpharetta. I got into theater really late in life. I was totally on the jock track. I was into football, wrestling; I wanted to study medicine. The second half of my senior year of high school — they always need guys in high school productions — a friend of mine said I should try it. And then the drama bug bites you. It was great; it showed me another facet of what you can be in terms of community. It was very much like a family, which really appealed to me. I went to Kennesaw State University. They have a great theater program, and they gave me everything I know now.

ArtsATL: Do you feel that performing improv at Dad’s Garage, performing in scripted shows like Black Nerd and writing plays like Woke are all very different activities? Or do you feel they all come from the same sort of wellspring?

Sharpe: I’d say they all connect. They’re all forms of storytelling. There are aspects of each that inform the other. When I wrote Woke, I basically did improv scenes with myself. I would build these two characters and see what they say. I would imagine if I was this character, what would I say in this position? I just kept doing that, and a story started to evolve. As a playwright, when I go to act, there’s definitely cross-pollination because I’ve done both. In terms of my script analysis, I know how to look deeper into the script than what’s on the page. And when writing a play, I know what’s helpful for actors to have because there are some things, if you don’t act, you don’t know how to really give actors your intention. There’s all of that.