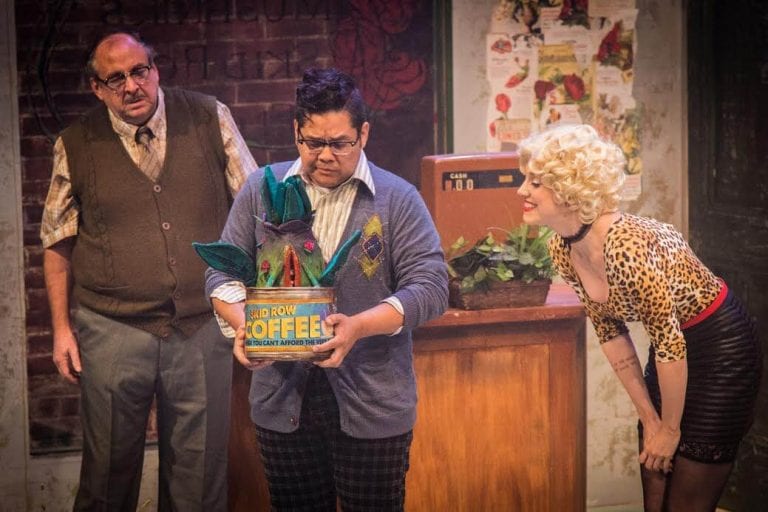 Little Shop of Horrors is a familiar classic, but Actor's Express puts its stamp on it. (Photos by Casey Gardner/Actor's Express.)

Review: Actor’s Express’ “Little Shop of Horrors” charms in its new take on the campy classic

That’s the famous final warning from Howard Ashman and Alan Menken’s monster hit of a campy monster-musical Little Shop of Horrors, which has had countless productions, including a Hollywood movie with Steve Martin, since its premiere in 1982. Actor’s Express steps up to the plate with a new production running through August 20. ArtsATL critics Jim Farmer and Andrew Alexander attended opening night and had this to say about the show.

Jim Farmer: Hello, Andrew. It’s been a while since we reviewed a show together. Our paths haven’t crisscrossed. Little Shop of Horrors is one of those iconic musicals that everyone seems to know and love. I can do the entire songbook — and often do, awake — or even in my sleep. What did you think of Actor’s Express’ new take on it?

Andrew Alexander: Yes, it’s been too long since we’ve been able to sit down and do one of these joint reviews. I’m a longtime fan of this show, as well, so I’m curious to hear what you thought, too. I have a few points of criticism, but overall I thought Actor’s Express did a really nice job here.

Farmer: I liked it too. I was a little unsure about how it would be staged. It’s a large-scale show, and I wasn’t sure if the Actor’s Express stage was sizable enough to pull it off, but they did. The flower shop takes up a lot of space here, but the Clay sisters [set designers Isabel and Moriah Curley-Clay] have found room for outside action, as well. Not all of this works, but much of it did for me. I think the key to a production like this is smart casting and directing [Rick Lombardo stages the musical] — and this has both. Would you agree?

Alexander: Definitely. I likewise thought the set was really gorgeous, striking a great balance between grandeur and intimacy. I didn’t think of this until you pointed it out, but I suppose you’re right: the flower shop was ginormous, and the street outside could seem a little cramped for the action taking place there. But overall I thought Isabel and Moriah Curley-Clay’s set was pretty brilliant.

Farmer: I found the cast really tight. At first I thought Juan Carlos Unzueta [part of the excellent In the Heights ensemble at Aurora Theatre last year] was a little bland as Seymour, but he grew on me. He has a terrific voice and hits the right sad-sack notes of the character. Kylie Brown’s take on Audrey was interesting. Audrey’s a bubbly, likable character, but Brown doesn’t shy away from the sadness of the fact that her dentist boyfriend Orin physically assaults her on a regular basis. There is a lot of pathos in Brown’s turn. One of the highlights from this production is Unzueta’s and Brown’s poignant take of “Suddenly, Seymour.” Bill Murphey does nice work, too, as flower shop owner Mushnik, and I liked Clint Clark as Orin, although he overdoes it at times, especially in a dentist office scene with Seymour.

Alexander: I agree that this was a strong cast that sounded great, though occasionally — correct me if I’m wrong — there was some trouble getting the balance between all the voices and the band just right. If I had criticism of the leads — Audrey, Seymour, Mushnik and the dentist — it would be that they looked and sounded too much like the characters from the 1986 movie. There aren’t a lot of new things actors can do with those roles, I suppose, but the accents and the delivery and the look of the characters were very much as Rick Moranis, Ellen Greene and Steve Martin did them in the film. Seeing some of that move in a new direction would have been interesting.

Farmer: What did you think of the urchins/Doo Wop Girls, played by Brittani Minnieweather, Trevor Perry and Kiona D. Reese?

Alexander: Very nice — those parts are always a lot of fun — but I think on opening night there was some trouble getting the balance of their voices just right with the music, as I mentioned. Also, the innovation of having a female Audrey II visible onstage pulled some of the focus away from them.

Farmer: I enjoyed the three, and they complement each other. But at times I felt they were directed to do too much. They are vital to the show, but a few times they lean towards overshadowing the central action, and they shouldn’t. Yet overall I liked the trio. One of the elements I wanted to ask you about is the blood-seeking plant, Audrey II. Every time I have seen the production it’s merely been an overgrown puppet plant. This is the first time I’ve seen a production where the audience gets to see the performer literally inside the plant. What were your thoughts?

Alexander: I’m glad you asked about that. Most productions I’ve seen have the killer plant, Audrey II, as a puppet, which, I believe, is how things played out in the original stage show. If I’m not mistaken, buying the rights to produce the show also traditionally comes with the opportunity to rent puppets of Audrey II in all its various sizes, from sprout to monster. Audience members don’t typically see the puppeteer moving the plant or the singer voicing the role, who is traditionally male. Here Audrey II is part-puppet, part-costumed performer whom we see, the splendid Kandice Arrington. She gave a star performance in what’s not really designed to be a starring role. I thought she was truly fantastic, and that’s pretty impressive if a performer who can’t move around the stage is stealing scenes. Casting a female Audrey II gives the relationship with Seymour a more seductive, erotic tinge, which really worked. What were your thoughts on Arrington as Audrey II?

Farmer: I thought Arrington had the sharpest voice of the ensemble. Her numbers were a lot of fun, and the musical was most alive when she [was] warbling. But I don’t know that having a puppet and a performer — who sprouts out at the top of the plant mid-show — worked for me. It seemed extraneous. Having a plant onstage as well as the actress playing it suddenly materialize makes for some slightly awkward visuals as the body count grows higher.

Alexander: For the most part, I liked the visuals of the costume-puppet combo. But having said that, I thought the set-up for the final number with the cast inside the plant, which is admittedly supposed to look a little campy, looked pretty terrible. By the way, Little Shop is based on an all-but-forgotten black-and-white Roger Corman film featuring Jack Nicholson. I’m a fan of the musical, but I’ve actually never seen the 1960 film. You?

Farmer: Oddly, I have not. But I’ve seen the Rick Moranis version 4,567 times, it seems.

Alexander: Likewise. But seeing the Actor’s Express show has kindled my interest in the original film. Is it intentionally campy? Or are those ridiculous situations really supposed to seem like horror in the original? Is there a sadistic dentist? I’m kind of curious to have a look now.

Farmer: I probably should watch it, as well. I do think it’s interesting that the 1986 movie forced a happy ending but the stage musical doesn’t have one. Yet I like and admire both takes. As a fan of musicals, I must say — I am giddy at all the musicals this local summer season.

Alexander: I think you’re right: the happy ending and the grim ending actually both work. And fans of the film who have never seen the original stage show will also be surprised because there are a lot of songs in the stage version that aren’t in the movie. And, yes, musical lovers are very much in luck this summer, for sure.