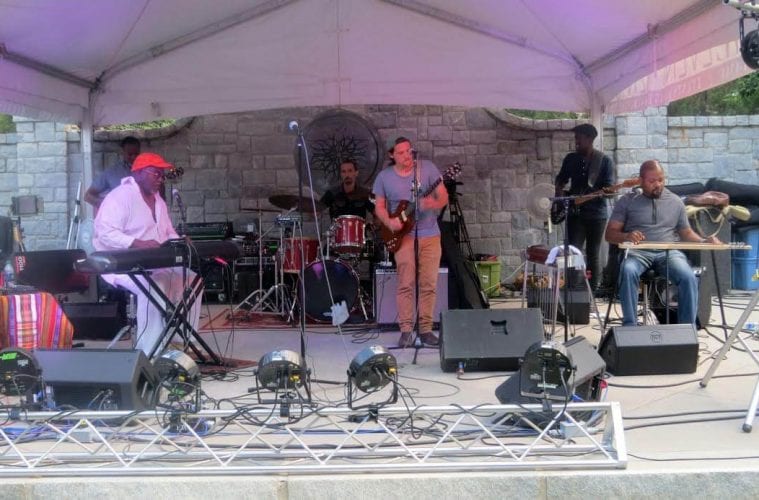 Friday evening posed threats of rain, with lightning-laden summer storms popping up all around the metro Atlanta area, but despite the dark and roiling clouds none came to greet the outdoor amphitheater at Callanwolde Fine Arts Center where their “Jazz on the Lawn” series hosted a performance by Joey “Papa J.” Sommerville and his band. Even if at the edge of dew point, the clouds helped keep air temperatures down as the crowd settled in for some hot music.

Sommerville took on the moniker “Papa J.” after becoming a grandfather, he explained from the stage, as he didn’t like the idea of being called “Gramps.” It’s a little more hip sounding, even to grandkids, and the “new millennium jazz” artist clearly has no interest in feeling or acting old. His energized, up-front music that evening served as good example of that.

With musical roots in the Baptist church, Sommerville learned to measure his playing by the number of people in the congregation who “got happy” in response. “If you aren’t touching the listener’s soul,” he is quoted in his bio as saying, “then you aren’t really playing music. Soul communication is the key.”

Jazz, blues, funk, gospel and bop have all influenced his sound, with a little bit of fresh insight drawn from pop sensibilities. This, combined with a warm personal stage presence and a good dose of showmanship, connect Sommerville with his audience.

Throughout the evening, Papa J. was at the helm, alternating on keyboard, trumpet and vocals, backed by his tight, experienced, energy-driven band: steel guitarist Dante Harmon (an alumnus of the late Col. Bruce Hampton’s band, and known as “the Minister of Sacred Steel”), Eric Essix and Tyler Neal on electric guitars, bassist Brandon Gilliard and drummer Darren Stanley. They played a mix of original charts with a few covers thrown in for good measure.

Original songs included the not-yet-recorded “Cloud 10” and a signature Sommerville number, “Put Your Red Cups Up,” getting the audience to raise high the red paper drink cups that has been passed among them. Sommerville also had “Red Up” t-shirts available for purchase, briefly hawked from the stage.

Covers included a funky rendition of Duke Ellington’s “Caravan” that included some trumpet licks alluding to jazz standard “Sweet Georgia Brown” at one point. A laid-back moment came with an affecting cover of D’Angelo’s swaying ballad, “Untitled (How Does It Feel),” accompanied by occasional flashes of lightning in the distance.

Papa J. closed with an older hip-swinging original, “Like You Mean It,” from his 2008 album of the same name, urging the audience to get up and “Dance all night long. Swing yo’ hips like you mean it.”

Alas, the dancing could not go on all night. The show was over just after 9:30 p.m., as concerts in the Callanwolde amphitheater gracefully observe a neighborhood noise curfew. Even so, it was a satisfyingly full enough evening of good-time music that ended on a high note before the weather could change its fickle mind.

Except for the stage itself, the Callanwolde Amphitheater is roofless, totally open air except for the surrounding panoply of trees, terraced granite and healthy dark green grass that slope uphill toward the magnificent Gothic-Tudor Revival style mansion built by Charles Howard Candler in 1920, and horticultural conservatory behind it. The amphitheater is a very comfortable venue for these kinds of concerts, not so large as to feel overly distanced from the performers.

Also nearby is a small formal garden, a nearly restored greenhouse and the cottage where the Rick Baker School of Music and Music Recording is based. Just beyond that is the fully restored barn, which now serves as a state-of-the-art music recording studio and guest artist residence, which is currently the professional work space of three-time Grammy Award-winning mixing engineer Phil Tan, who is the recording program’s director.