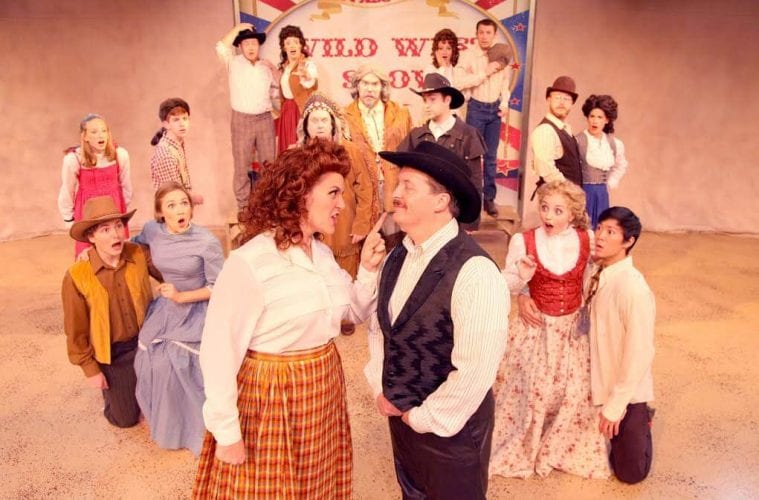 Not terribly far back, summer used to be a dormant time of the year for local theater as everyone prepped for the upcoming fall season or simply took a much-needed rest. Somehow, the summer of 2017 became not just a time to produce but a time to produce musical theater.

Stage Door Players has jumped into the musical theater summer free-for-all with their take on Irving Berlin’s Annie Get Your Gun. Running through August 6, it’s a no-frills show given considerable life by its lead actress Paige Mattox.

Berlin’s musical is a fictional take on shooting legend Annie Oakley (Mattox), who became an integral part of Buffalo Bill’s Wild West Show. She gets her gig by out-shooting legendary Frank Butler (Bryant Smith), but it doesn’t sit well with Butler. Yet even when he is threatening to walk away from the show because of Annie’s newfound notoriety, it’s clear that Frank and Annie are developing feelings for each other.

The 1946 production of Annie Get Your Gun on Broadway starred Ethel Merman, who returned for a 1966 run. Three decades later a lauded 1999 revival (penned by Peter Stone) teamed Bernadette Peters and Tom Wopat. That staging — the production Stage Door is presenting — differs from the original with its show-within-a-show setting under the big top and with the exclusion of some of the songs. It does, however, include the relationship between the characters of Winnie Tate and her (half) Native American boyfriend Tommy Keeler.

The musical has been a cavalcade for actresses over the years, even Reba McEntire. It’s easy to see what attracts them to the production and the part. Annie is a dandy of a role, and the score has such iconic numbers as “There’s No Business like Show Business,” “Anything You Can Do” and “They Say It’s Wonderful.”

Locally, Aurora Theatre staged the show back in 2007 with Natasha Drena, whose Annie is one of the best I’ve ever seen.

As directed by Robert Egizo, the company’s artistic director, this version of Annie Get Your Gun is enjoyable, even if it never fully finds its own identity. Egizio’s work moves at a fast clip and goes down quite palatably (save for a few slow moments early in Act II), but he doesn’t put many definitive, individual touches on the work.

What he has done effectively is put his cast together. Egizio handles a large ensemble, and the players are solid and in touch with the material, including George Deavours as Sitting Bull, Jeremy Wood as Charlie Davenport, Alexandra Ficken as Winnie and Michael L. Pugh as Buffalo Bill Cody. Only Jennifer Smiles disappoints. Her Dolly Tate is strident and one note.

A veteran local musical theater performer the last decade or so, Smith makes a fine Frank Butler — proud, a bit arrogant, but undeniably shaken by his new female costar. Yet what gives this version its kick is Mattox. She is terrific. Her accent at the beginning does seem a bit far-fetched, but she grows into the character really quickly and winningly. Mattox, seen in Stage Door’s The Mystery of Edwin Drood and Kiss Me, Kate!, niftily handles the musical challenges, both the solo numbers and her duets with Smith. It’s effervescent, head-turning work.

The dancing is fairly minimal, but Jen MacQueen’s choreography livens up some of the numbers. The smoothest, splashiest might be the climactic “Anything You Can Do,” where Annie and Frank square off again. They both want to win but are afraid of losing each other.

This production closes the 43rd season of Stage Door Players, and it’s a treat. It may not be as vividly executed and imagined as Actor’s Express’s current Little Shop of Horrors, but it makes up for it in its knockout lead actress.