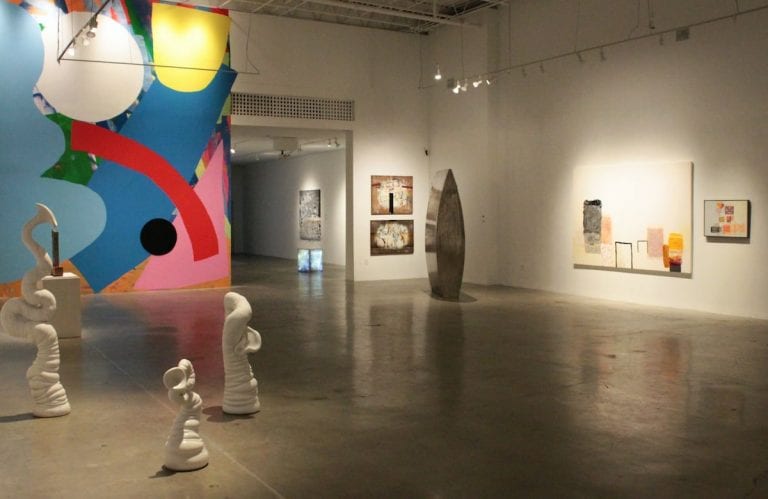 A couple of decades ago, the late and greatly missed critic Thomas McEvilley remarked in an interview that recently he had liked everything he had been seeing, implying that if it had gotten past a gallery gatekeeper, that was enough to satisfy his radically pluralist aesthetic and to give him genuine personal enjoyment.

I could say the same for Abstraction Today, the MOCA GA show (closing July 2) in which six Atlanta galleries present the work by their gallery artists they consider most appropriate for the theme.

I like some works much more than others, but it’s obvious everything has been included for a defensible reason. This is pluralism of a sort, although it omits not only the scrappy gallery-unfriendly side of artistic practice but also a great deal of work that has not yet acquired a collector base. And, of course, it also omits artists represented by other Atlanta galleries, making this inevitably a partial if far-ranging perspective on the aesthetic practices respected by the Atlanta art world. But it includes enough variety to be a worthwhile, if sometimes peculiar, survey, mostly of Georgia-based artists, with the inclusion of a few national and international guests that make for interesting points of comparison.

The show has been intelligently installed to bring out evident parallels between individual works, which means that works by the same artist may be at opposite ends of the exhibition. Sometimes this is to the advantage of the artist; it’s hard for anything else in Pete Schulte’s work to compete with his wall painting in which the volume depicted by triangles and quadrilaterals alternates between projecting box and beckoning void, sort of a take on the duck-or-rabbit perceptual phenomenon. So it’s fortunate that his “Braid” graphite drawing ironically echoing the shape of Brancusi’s endless column is exiled to another gallery, where it rhymes visually with Pascal Pierme’s similarly vertical wall sculptures.

At times this method of juxtaposing stylistic similarities is genuinely enlightening; it is useful, for example, to note that there are no other painting strategies equivalent to the bold parabolas of the Terri Dilling painting that hangs in isolation next to the wall text of the exhibition title, which makes it startling to discover in a corridor the blurry pastel-shade delineations of Dilling’s “Chain Reaction,” paired with Ben Steele’s similar palette, with irregular geometric forms that in his case represent interactions of light with a crystalline structure — or at least that is what I suppose, for the wall label describing his intentions is incomprehensible. Both Dilling and Steele work with difficult concepts and painterly metaphors for natural processes, and apparently, neither can be summed up in a few cogent sentences.

This suggests that a less visually coherent but more conceptually challenging exhibition could be curated based on the numerous artists here who work from both the analyses of science and the visual metaphors suggested by the processes analyzed by the sciences, processes that range from the molecular interactions that interest Dilling to the immense natural forces implied by the poured graphite flows in Seana Reilly’s “Cascadence I” and “Cascadence II.”

Such an alternate show would be governed by its wall text and catalog essays. In this exhibition, the wall labels’ attempts to explain the artists’ interests and thought processes seldom elucidate the actual ideas behind their paths to abstraction, but the visual linkages between their ways of working are evident to anyone who takes the time to look.

Granted, sometimes the linkages are based primarily on palette and only secondarily on line, as when Bojana Ginn’s striking science-based illuminated sculpture and video projection ends up adjacent to the very different visual style of P. Seth Thompson’s “Terminator 2: Judgment Day.” Here again, however, more comprehensive and searching wall labels would have brought out the intriguing parallels and radical contrasts between Ginn’s and Thompson’s explorations of perception, nature, and culture. Eric Mack’s mix of history and formal geometry is an apt neighbor to both, and all three are linked to outwardly dissimilar artworks elsewhere in the exhibition through shared ideas expressed in varying formats. Again and again in this pleasingly formalist show, there is a differently arranged concept-based show fighting to get out.

The conceptual show seems on the verge of emerging at the very beginning, where Ann Stewart’s rightly highlighted sculptural reflections on cognition and construction face off with Susanna Starr’s Day-Glo-shaded lacework construction across the gallery, which in turn contrasts in intent as well as volume with the wondrously lumpy geometries of Jeff Conefry’s hybrid painting-sculptures and Mike Goodlett’s thoroughly disguised sexual references cast in Hydro-Stone.

Even the most formal of family resemblances can be thought-provoking, as in the wall of paintings that begins with InKyoung Choi Chun’s complex geometries derived from a personal metaphysic of human energies symbolized as bubbles that obscure elements of landscape. It then proceeds through Zuzka Vaclavik’s quite differently intended mixture of botanical shapes, strategic echoes of Matisse cut-outs, and too many other elements to enumerate, much less explicate. It then concludes with Cynthia Knapp’s contrasting approach to abstraction and organic form — three perspectives on major conceptual issues, but linked here mostly by shape and color rather than idea-based dialogue.

Other juxtapositions seem linked entirely by shape and color, as when two adjacent paintings by Kim Piotrowski and Kimber Berry reveal that the two artists share a penchant for dramatically deployed blends of the organic and geometric rendered in vividly-hued flows of energy, as well as the happy accident of a repeated monosyllable in their given names.

The flow of the show returns us repeatedly to issues raised earlier, as when Phil Ralston’s elegant perspectives on constructivist architectonics are contrasted with Rocio Rodriguez’s minimal reductions of the same geometric issues and contrasted further with Benjamin Britton’s difficult to interpret innovations in that department, while Thomas Prochnow’s familiar translation of curvilinear form into metal sculpture rhymes in its simplicity with Rodriguez’s painted rectangles.

The curatorial juxtapositions of sculptural and painterly form here range from obvious to brilliantly inventive, immediately adjacent to one another. Caio Fonseca’s sculpture and painting illuminate each other and would fit with no other work in the exhibition, but the adjacent placement of Venske and Spänle’s carved-marble cartoon-like creatures in front of Carol John’s similarly contorted rendering on canvas is a stroke of comic genius that may or may not also cast light on some psychological association between amusement and fascination.

Both the presence and the placement of the seeming outliers are instructive. An exceptionally well-chosen example of Lucinda Bunnen’s rephotographed enlargements of weather-damaged slides share a wall with James Turrell because the particular artworks play well together, but in this case I am far more engaged by Bunnen’s discovery of an abstract cloud of light in what once was a straight photographic image — resulting in a photograph that reminds me in many ways of the Turrell experiments with light that I find far more compelling than his aquatint etchings of concentric ovals. I must assume that the same associations were in the mind of the curator who installed the exhibition.

Ryan Coleman’s combination of the semi-representational and the drippily spontaneous is also an outlier in this show, although it is certainly not so in a national or global context. Likewise, Brendan Carroll’s awkward placement in this exhibition betrays the singularity of his starting point of text-and-image quotation (a child-safety logo) blended with painterly strategies of overlay and removal, a strategy with more parallels elsewhere than in this exhibition. Maggie Davis, on a wall and in a class by herself, contributes a patchwork of overlying colors in which more is going on than a casual glance can reveal.

At opposite ends of the main gallery, but not necessarily of the art world, Alex Brewer (HENSE)’s enormous geometric wall painting and Michi Meko’s wood-assemblage wall piece both illustrate the journey from gritty vernacular experience to elegantly shaped contemporary art. But while HENSE’s work has no obvious symbolic meaning, Meko’s “Flood” encodes vast stretches of Southern and African-American history that would require more wall text to explicate than the exhibition could possibly allow. As in so many other instances, this fact justifies the arrangement of work by their most superficial, if sometimes subtle, formal qualities — there is too much else going on in these works to allow for any other kind of organizational principle.

It would have been interesting to have evaluated the work of the Georgia-based artists in terms of global trends in abstraction — but that would have been a task for someone far more versed in the contemporary global art world than I am, since we in Atlanta rarely see more than a few examples of the types of abstraction that dominate global discourse. (Julie Mehretu’s spectacular painting at the High Museum would be one example, of course — but that is less abstraction than a plethora of representations turned into abstract pattern, something that is only minimally represented in this exhibition.)

The six galleries that independently submitted the works that museum director Annette Cone-Skelton installed so insightfully might or might not have preferred for Abstraction Today to have given greater prominence to the shape of their specific gallery philosophies. But the show as actually presented is far more of a credit to the galleries — Alan Avery Art Company, Marcia Wood Gallery, Mason Fine Art, Sandler Hudson Gallery, {Poem 88} and Whitespace Gallery — than an arrangement by gallery roster ever could have been.