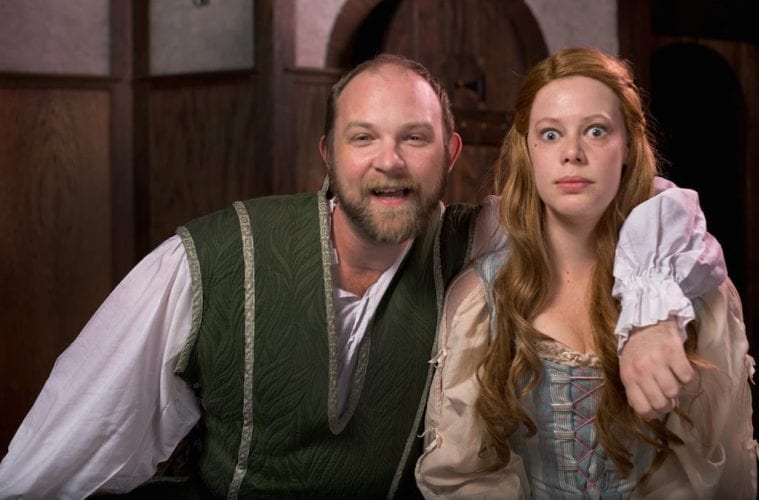 The Taming of the Shrew is probably Shakespeare’s most controversial and thorniest comedy; its story of an independent woman bullied and tortured into submission (ha ha?) can be pretty tough for contemporary audiences to warm up to. But Atlanta’s Shakespeare Tavern Playhouse  proves it’s nonetheless capable of delivering a lively, comic and appealing production, on stage through July 10.

Director Jeff Watkins keeps the emphasis on boisterous and licentious comedy, an approach that doesn’t just function adequately but seems to suit. Matt Nitchie plays Petruchio in the initial scenes as an undaunted swaggering braggart, and the early encounter scenes with Katherina (Dani Herd), when the two characters meet as sparring equals, are among the show’s most animated and funny. And Nitchie also adds some interesting, scary touches of manic, near psychotic and panicked energy to the later domineering “taming” scenes.

Herd as Katherina captures that character’s initial independent-mindedness and blind rages, though the ultimate submissiveness could be frustratingly hard to read; a blinking, sarcastically ironic answer to Petruchio’s wagered call seems to indicate a cynical, subversive take on Kate’s submission, though this is wiped away by a more heartfelt and straightforward reading of her final speech.

The supporting cast has fun fleshing out the more easily digestible comic subplot about the suitors Gremio (J. Tony Brown), Hortensio (Paul Hester) and Lucentio (Trey York) for the hand of Bianca (Kristin Storla), Kate’s more desirable younger sister. As with many of the Shakespeare Tavern’s productions, the show is aimed outwards, with the characters in asides or soliloquies addressing the audience directly, an engaging practice which the tavern — with its earthy atmosphere and structural likeness to Shakespeare’s Globe — is particularly well-suited for.

All in all, some may find the show’s thornier questions too easily glossed over here, and its earthy humor may not be a good match for those trying to introduce kids to Shakespeare. If Shrew has never been your show, this new production probably won’t be the one to win you over.

Still, although it’s not a production that seeks to resolve the play’s strangeness or to offer a strong contemporary perspective on its complex issues, it’s nonetheless an interesting show: a broadly appealing production of Shakespeare’s often narrowly appealing play.