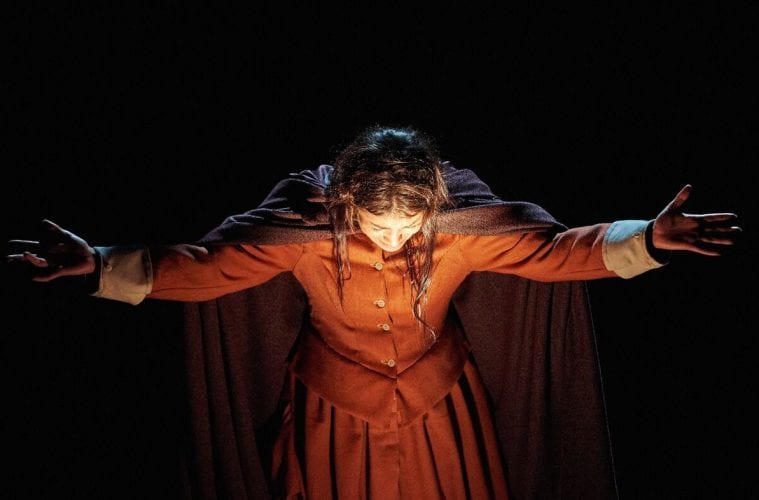 Review: “Abigail/1702” builds on Arthur Miller’s “Crucible” but unwisely veers from his intent

A bit of old writing advice has it that a story should start, not at the beginning, but in media res, right in the middle of things. The new play Abigail/1702 by Roberto Aguirre-Sacasa, currently running at Aurora Theatre through October 15, goes one further by starting its story long after the end.

Aguirre-Sacasa takes on the intriguing notion of catching up with the characters from The Crucible 10 years after the events depicted in Arthur Miller’s monumental 1953 classic about the Salem witch trials. (Miller’s characters themselves are based on real historical figures, though he took a few small liberties here and there; his Abigail Williams is 17 at the time of the trial, as is Aguirre-Sacasa’s, but the real person was reportedly 11 or 12).

Saying that the adult Abigail Williams, the center of Aguirre-Sacasa’s play, has a lot to deal with from her past is an understatement. After being orphaned as a young girl by a violent attack in the Pequot Wars, having an affair with her protector’s husband and then accusing countless Salem residents of witchcraft, Miller’s Abigail steals her uncle’s money and in Act IV disappears from that story, seemingly escaping retribution for her actions.

In the new play, Abigail (Diany Rodriguez) has changed her name and slowly built a new, independent life for herself in a small and isolated cottage on the outskirts of Boston. Ten years on, she’s sort of a New Agey healer who grows her own organic herbs and vegetables — it all doesn’t look so bad — but she still carries enormous guilt and trauma from her past. At her door one day arrives a sick sailor (Lee Osorio), and she slowly nurses him back to health. As a romance develops between them, he probes her past and she discovers that he, too, is hiding his identity to conceal things from his past.

The mainstage at Aurora is wonderfully vast, and set designers Isabel and Moriah Curley-Clay fill it with a beautiful and detailed set, giving us spooky woods, a garden and at its center a cozy cottage outside of colonial Boston. But the large stage and enormous set would be a more appropriate setting for a grand historical epic: the little five-actor play seems dwarfed and might actually have benefited from a smaller, more intimate venue. I was unmoved by Abigail’s monologues and narration when she speaks directly to the audience, and I wondered if the scale, the lack of intimacy in the venue, may have been part of the problem there. 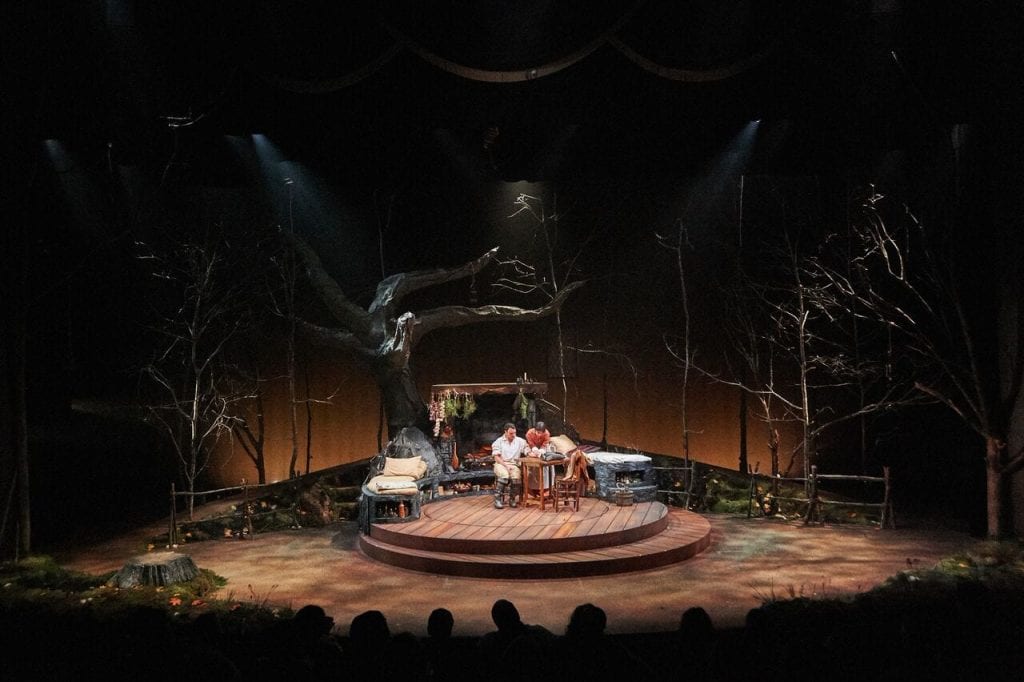 The actors sometimes seemed swallowed up by the large stage area.

The term “spoiler alert” seems especially appropriate. Characters speak of the devil, and then later in the play — it’s as awful as it sounds — he appears. The plot development spoils an otherwise passably decent show: it’s so terrible that finding words to express my distaste is difficult. I’ll just point out that in The Crucible, we’re meant to understand that the unjust, tragic events were caused, not by a supernatural instigator, but by social hysteria, petty grievances and religious zealotry.

If the Dark Lord himself had genuinely been lurking around, then a set of trials to determine who exactly came under his influence may not, in hindsight, have actually been such a terrible idea after all. (If we’re meant to understand the devil-character as a figment of Abigail’s delusional mind, then our lead character is crazy, and her guilt, her drive for forgiveness, and so on, mean less, if they mean anything at all). Reimagining the characters from The Crucible 10 years later is admirably ballsy; injecting elements of the genuinely supernatural into the story is total balls-out foolishness.

Even if we generously ignore the presence of Satan, the play is still problematic. Abigail’s path to redemption is long, but forgiveness for causing the pointless deaths of 20 people still seems to come too easily. Miller’s Abigail is simply a bad person; she makes immoral choices motivated by selfish impulses. This, I think, is an explanation that most contemporary playwrights resist allowing. In the end, Aguirre-Sacasa’s attempts to complicate Abigail from a contemporary perspective are not an improvement on Miller’s harsher take.

There’s a nice love story at the center of Abigail, beautifully enacted by actors Lee Osorio and Diany Rodriguez (it’s curious that the most successful and compelling story element is also the least directly related to the events of The Crucible), but unfortunately we leave that story for another one. Abigail/1702 is a play that takes great risks, usually a praiseworthy impulse in the theater, but here one is reminded that there’s actually a great risk in taking great risks: things can go completely off the rails.