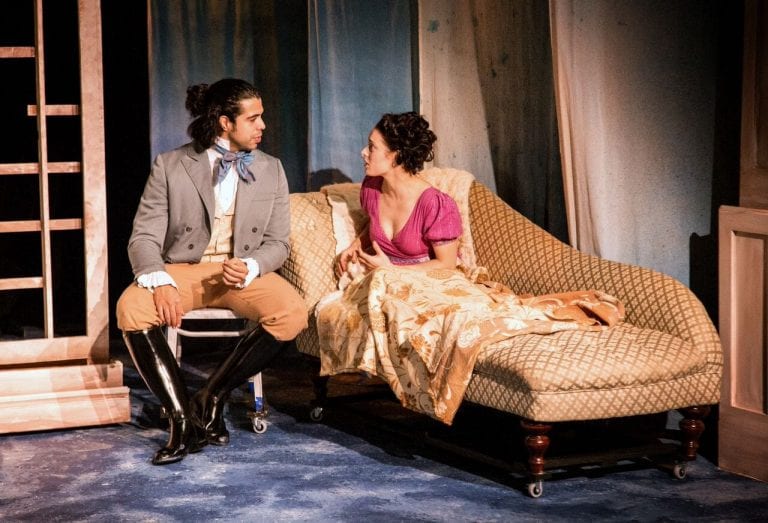 The things that happen to a pair of pretty young women without any money or any property aren’t, well, particularly pretty. The two decent, likeable, but very different young sisters at the center of Jane Austen’s Sense and Sensibility, currently being performed in a new play adaptation by Kate Hamill at Synchronicity Theatre through October 15, suddenly find themselves thrust from material comfort into poverty and dependence on others.

Austen may have been writing about a deeply formal society, but beneath the polite language and mannered behavior, things could get brutal, as our heroines discover from their new perspective in diminished circumstances. The swift, funny, likeable production nicely dramatizes Austen’s dark, comic take on human behavior, capturing her tone and her world, which often resists easy adaptation, in delightfully unusual ways.

The young Dashwood sisters — the pragmatic, reserved Elinor (Shelli Delgado) and the romantic, demonstrative, more impulsive Marianne (Jennifer Schottstaedt) — have always thought of the house they grew up in as their home. But after the death of their father, Mr. Dashwood, an event that opens the story, they’re confronted with the fact that this is decidedly not the case. Their mother, Mrs. Dashwood (Marcie Millard), is the second wife of her husband, and as such the property goes to his son from his first marriage.

The Dashwood women move to a tiny cottage (the outrageously wealthy and propertied people around them go on and on to them about how wonderful cottages are). And though they each fall in love with men — Elinor in her quiet, reserved way for Edward (Justin Walker) and Marianne in her headfirst way for the scoundrel Willoughby (Marcello Audino) — their hopes for marriage are seemingly blocked in one way or another by their circumstances. “Who will marry whom?” became the central question of a million subsequent romance novels, but for Austen the question extended beyond issues of romance and compatibility, carrying with it serious, even life-or-death, implications: who will have a chance at a decent life?

A small ensemble cast at Synchronicity manages to thoroughly populate the stage with the many people of an Austen novel. (It’s one of those busy shows where it’s surprising to see a tiny handful of actors take their bows at the end). Delgado as Elinor effectively evokes deep empathy for a character that would seemingly be difficult to bring to the stage as sympathetic: someone totally reserved, who is skilled primarily at hiding her frustration and heartbreak. Schottstaedt as the pretty and emotional Marianne is heartbreaking to watch as she’s taken in by the dashing Willoughby. The cast clearly has fun acting as Austen’s gossipy society, many of its members comically, deeply unpleasant beneath the surface.

Director Rachel May wisely keeps the pace swift. Viewers may understandably find their heads spinning through the first few scenes (actors take multiple roles, and it can be hard to keep track of who is related to whom, but the central story eventually emerges). Sparse furniture and other set pieces are on wheels, providing for speedy changes in location, but members of the ensemble also often move the furniture during a scene, turning a table when dramatic news arrives or jerking a chair when a character receives an insult. It sounds terrible, but it often effectively illustrates and brings to life the subtle undercurrents beneath the surface of the action. Other elements like a puppet to represent an ancient, shrunken society character I found less successful, though overall it’s impressive to see the company do a lot with so little.

With Sense and Sensibility, Synchronicity proves itself capable of taking on the challenging task of bringing Austen to the stage.