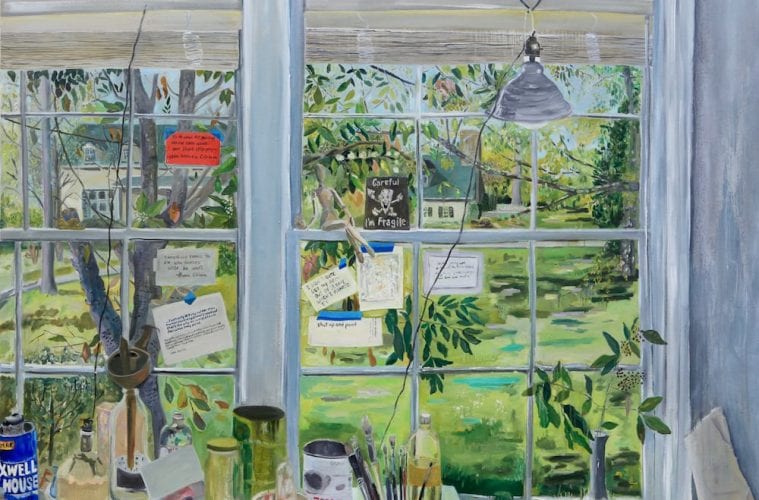 Review: In “A Tin of Egyptian Cigarettes” Mary Addison Hackett’s joy is inherent

“I eventually felt joy rather than tremendous angst — I realized that’s the way an artist should feel when they paint,” Mary Addison Hackett rendered as a hand-written note in the large painting Studio Window at Marcia Wood Gallery. A Tin of Egyptian Cigarettes, her inaugural solo show at the gallery, presents the last decade of Hackett’s journey as an artist. The show features several bodies of work: folksy interiors, neo-futurist explosions and abstracted still lives. Threaded throughout them all is  Hackett’s inherent sense of joy. Her loose brush strokes, vibrant color choices and playful compositions make for some fun, expressive paintings. In her more figurative work, Hackett delves into the abstract. Often she distorts perspective with methods more akin to a folk artist than fine artist, sometimes making objects indistinguishable from each other. Drips, impasto, gestural marks and loosely rendered figures bridge the gap between realism and abstraction throughout the collection, turning what would otherwise be considered a homey style into a signature mode of creation for the artist. Whether it’s a scrawled-on pink rainbow or dripping-wet trees, a playful sense of glee is central to Hackett’s work.

Studio Window depicts the philosophy of Hackett’s painting practice. The work is a meditation on what the artist sees when she looks out her studio window — complete with handwritten notes attached to the window with blue painter’s tape. One says, “Shut up and paint,” and another reads rather cryptically, “It’s all about the painting. No one cares about your stupid little program. Steve Roden via Cole to me.” These little notes show the artist’s personal investment in her practice while also humanizing her to the viewer.

The objects within Hackett’s still life works are impeccably curated. Studio Window features a jaunty articulated wooden artist’s model perched on the windowsill. A tin of Maxwell House Coffee and a snow globe from Los Angeles flank the bottom corners of the piece. Centered between them is a container of artist brushes fanned out, pointing across the canvas. Hackett’s positioning of unique items gives the viewer lots to look over, while also engaging with each other to create a natural line of movement across the canvas. While this work is mostly figurative, there are abstract qualities true to Hackett’s style. Some of the containers are so loosely rendered that they are indecipherable. Hackett allowed parts of the canvas to drip, blurring the boundaries between bottles, blinds and brushes. The scene through the window is lovingly rendered, giving the viewer the impression that Hackett’s studio is in a bucolic location with plenty an abundance of flora, fauna and impressive homes. A less creative painter would just present the scene as a basic and beautiful landscape, however, Hackett takes the view from her window, and transposes her own world as a painter over it. The kitsch, junk and baubles of her own life are as much the subject of the work as the trees blowing in the wind in the distance. The objects hidden in the paintings lend humor, intimacy and personality to Hackett’s work. The Goldfish Were Buried in Slide Boxes appears to be a coffin in the woods — until you realize that it’s actually a goldfish in a box — a Kodak slide box, to be specific. Hackett’s intentional manipulation of scale makes the coffin appear human-sized. 1968, It Was a Beautiful Cake features a lonely frosted cake and a plastic Kroger bag hung on a door handle. I, too, use the occasional grocery bag for trash, and noticing this detail in Hackett’s painting put a smile on my face. Old calculators, CDs, a vintage birdcage — nostalgia is scattered consistently throughout Hackett’s work.

Faker Than Plastic explores a plethora of colors, textures and patterns in a highly stylized, yet barely recognizable manner. Figures like tree stumps, flowers and pineapples swirl around in an other-worldly plane. They joust about amongst a web of Day-Glo colors. Shapes like diamonds and swirls evoke the styling of an 8-bit video game. These elements do not fill up the entire canvas, rather they explode and collapse on each other in the center of the painting. A delicate wash of white paint along the edges of the painting frames these images, giving the painting the effect of a self-contained universe. At first glance, Mary Addison Hackett’s artistic interests are expansive and varied, but woven delicately throughout the collection is a sense of inherent joy. Her artistic styling transforms the mundane to marvelous, giving the viewer an opportunity to connect with life’s tiniest curiosities. Also imbued throughout is a sense of memory and nostalgia, where the past and present collapse into something timeless.