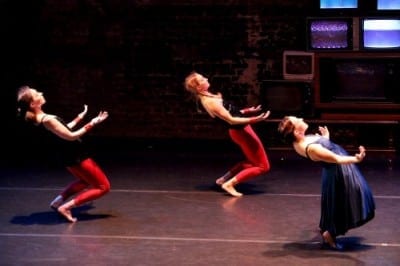 Review: "Blackbird," a story of unspeakable pain, a major work from Brooks and Company Dance

With last night’s premiere of “Blackbird: A Story of Exploitation,” choreographer Joanna Brooks has established a strong, clear voice among contemporary choreographers in Atlanta, successfully bringing to the Balzer Theater stage a devastating subject: human sex trafficking and the exploitation of children.

Inspired by Mariane Pearl’s article  “The Sex Slave Tragedy” and driven by a desire to increase awareness of an unspeakable subject, Brooks showed impressive skill using a contemporary dance idiom to tell a story of two sisters’ journey through this brutal underworld. Featured on a program with Kristyn McGeehan’s exultant “Trinity,” Brooks and Company Dance will perform “Blackbird” again tonight and Sunday afternoon. 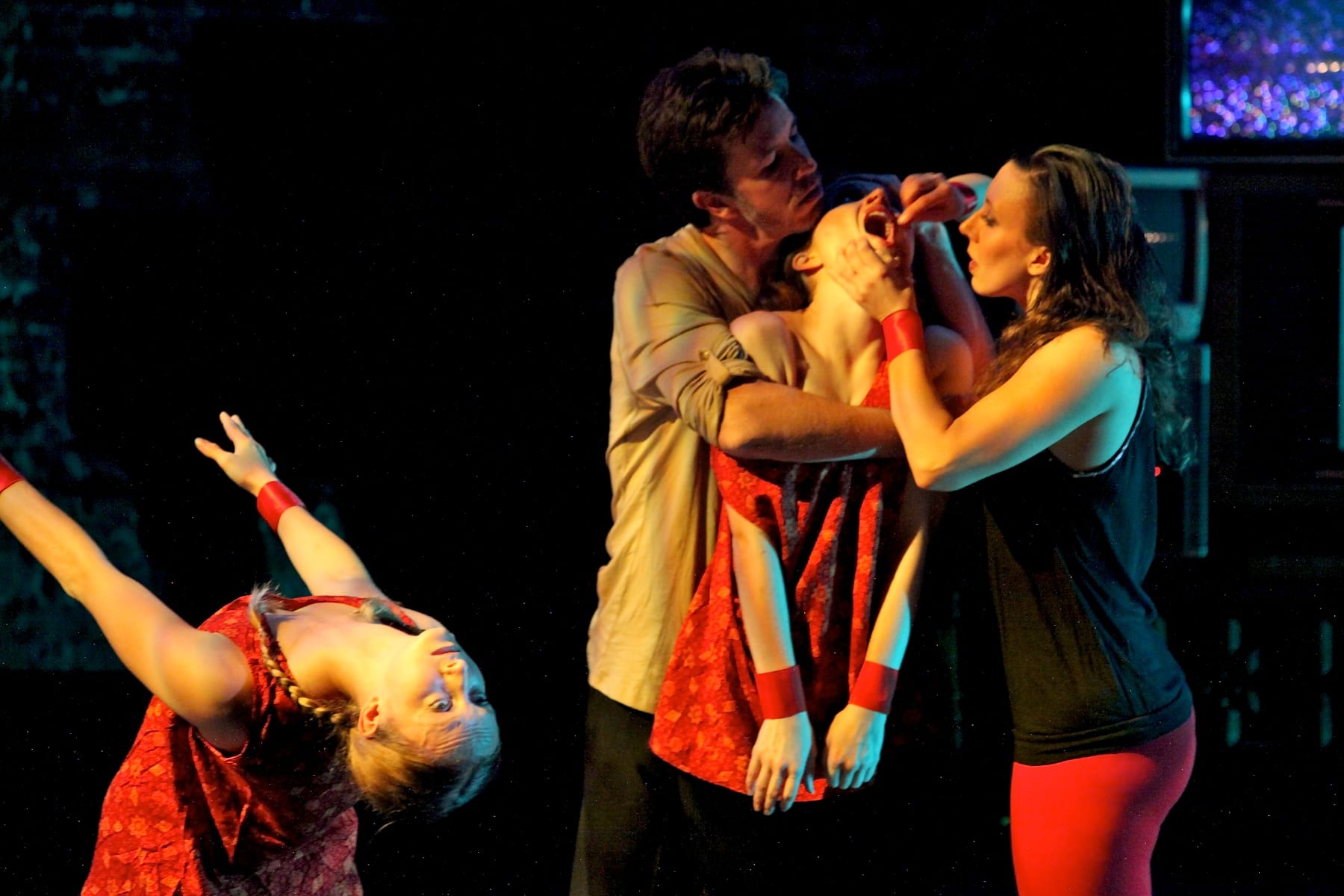 Christopher Chambers’ video installation, a wall of television screens backing the stage area, added dimension, as did Christan Vick’s simple set, a hanging sculpture of barbed wire and metal fencing that hinted at the true horror some of these victims experience. Malina Rodriguez’s subtle lighting, along with music ranging from booming, overpowering electronic sounds to a Nina Simone song, enhanced the choreography’s erratic moods. These were at times eerie, horrific; at others, flowing in a journey toward wholeness. (Photos by Will Day.)

Brooks told her story through a physical medium, the body, which was seen as object of enslavement, of exploitation and abuse, as well as expression of memory and emotional release that eventually cleared a path toward healing. Her vocabulary — based in impulse and expressive gesture — sensitively represented brutal acts and extreme emotional states without literally depicting them. If it weren’t for this thin layer of abstraction, the performance would have been unbearable. 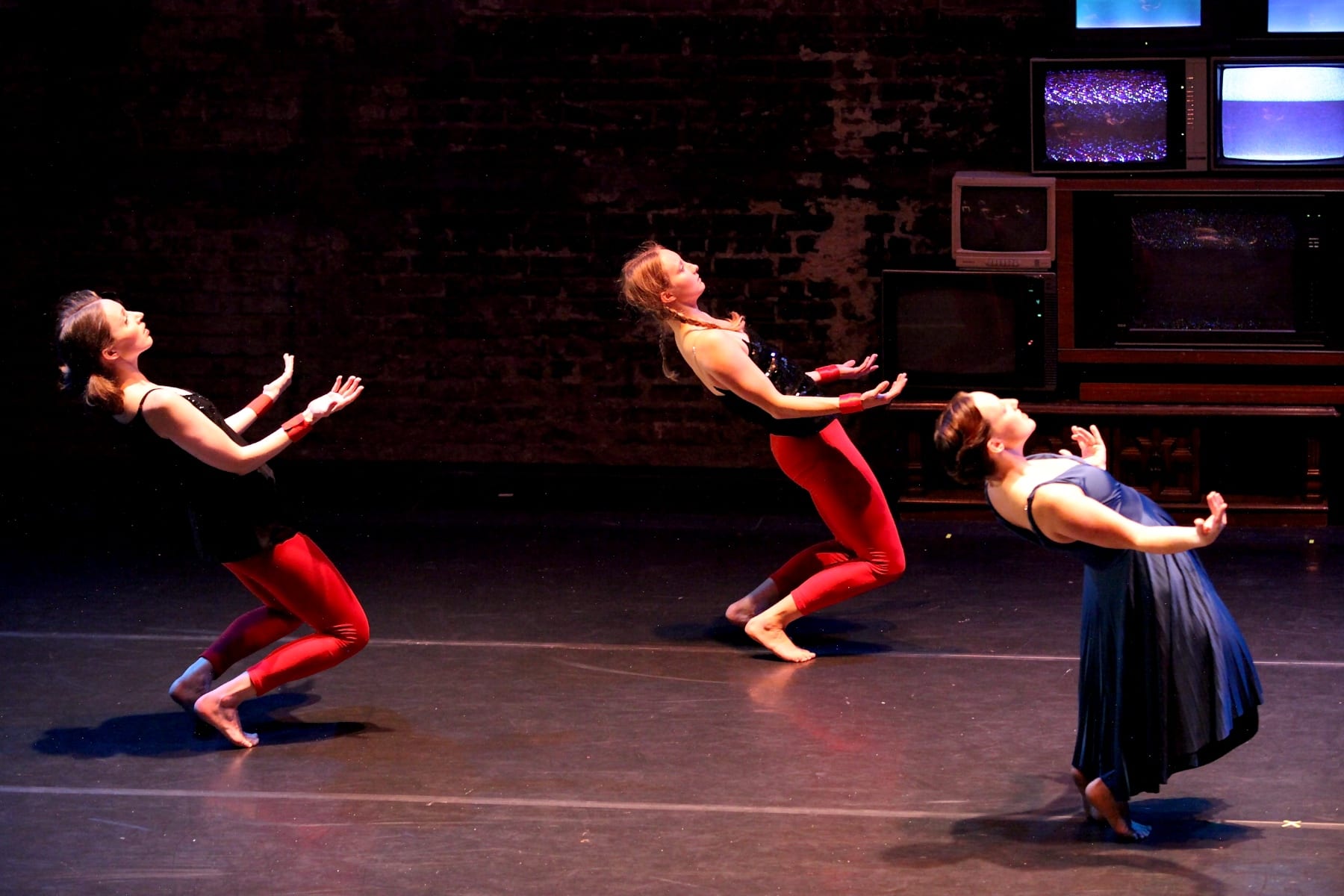 New company members Sarah Kelly Kerr and Rose Shield danced admirably as the two young sisters. They were wise not to overact, but to use a soft focus that let the choreography speak. All the performers met “Blackbird’s” physical and emotional demands with apt commitment and skill.

Simple suggestions, such as wide red ribbons tied around both wrists, represented captivity within the brothel, where Jena Kovash, as the madam, and Thomas Bell, as the pimp, forced each girl into subjugation. Bell’s rough caresses became slaps, and then he ruthlessly manipulated each into submission. They repeatedly hinged back, spiraling head and upper torso away as they fell to the floor, straining and twisting through a dance of anguish, guilt and, finally, numbness. At one point, they rose from an open deep knee-bend, pressed up into a posture, feet rotated inward and shifted into one hip, defeated, staring blankly at the audience. 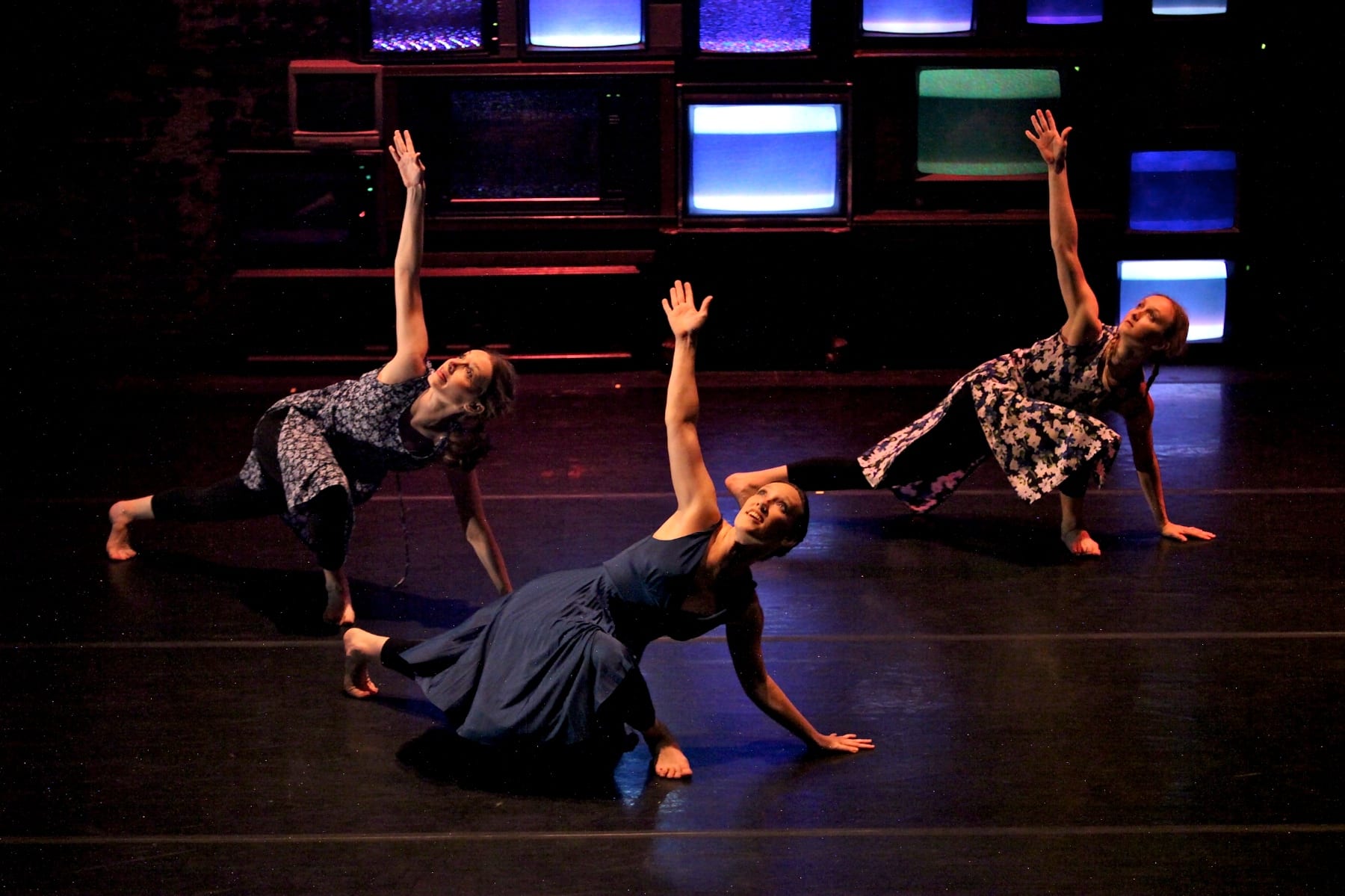 Kristyn McGeehan, whose role was perhaps inspired by Cambodian social worker Somaly Mam, largely responsible for the rescue and rehabilitation of some 3,000 girls there, rescued the sisters. Removing them to a coolly lit space, McGeehan swept away suffering and made way for their healing. Gently spiraling turns and circular motions glowed from within, emanating freedom, inner strength and gentle power.

With “Blackbird,” Brooks offered a simple, compelling story that brought a serious matter to the audience’s attention. The work’s success wasn’t due simply to the movement, the shocking subject or any particular image or motif. It was Brooks’ command of craft, her careful selection of material and its intuitive development in line with her story. That, and unfathomable courage.