Sunday was a good day for new chamber music. About 20 miles south of Atlanta, at Spivey Hall in Morrow, the Atlanta Chamber Players offered a world premiere by Michael Gandolfi, a Boston composer (and a favorite of Atlanta Symphony Orchestra conductor Robert Spano).

Gandolfi’s music is heard often enough in these parts that, instead, I ventured about 30 miles north of the city to hear the Riverside Chamber Players in their own commissioned world premiere from Michael Kurth, an Atlanta Symphony bassist with a madcap sense of style. 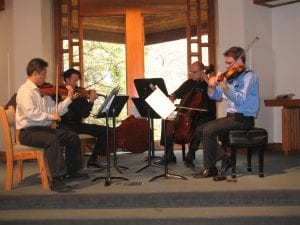 The Riverside Chamber Players are a band of moonlighting ASO musicians who, seven years ago, went looking for a creative outlet and an ensemble to call their own. As cellist and founder Joel Dallow told the audience Sunday afternoon, the goal in 2003 was to play chamber music as if it were in their own living rooms, in their own communities. Thus the musicians wear loose, casual clothing, speak informally before each piece, encourage children to attend, keep the concerts under 90 minutes and perform for what’s called an “underserved community” — not inner-city kids or shut-ins at a nursing home but the sprawling suburb of Roswell, where there’s a lot of wealth but, as yet, not a lot of professionally played classical music.

Their concert at the Bridge to Grace Church was quite satisfying, with the sanctuary’s clear acoustic and large windows that overlook the bright autumn foliage. They opened with Shostakovich’s morbid and ferocious String Quartet No. 8, the famous Op. 110. (It was a Shostakovich weekend, with the ASO performing Symphony No. 10 in Symphony Hall.)

The playing was mostly excellent. In flashes, Shostakovich’s quartet operates like a mini violin concerto accompanied by a trio, with dense, hyper-virtuosic writing for the first violin. Sou-Chun Su handled the part well, although his phrasing was often viscous — resistant to flowing easily. But that’s a quibble. Together they communicated the message of the piece. Dallow made a solid anchor and violinist Kenn Wagner played with his usual lovely tone, although young violist Wesley Collins, who joined the ASO in 2008, outdid them all. He’s a monster in the best way. Assertive, intense and gracefully virtuosic, he’s also a very capable chamber musician, blending in cozily or standing apart with bravura, as required. In the quartet’s final minute, there’s a lyrically painful little melody for the viola, in which Collins captured perfectly the raging, broken spirit of the whole piece. 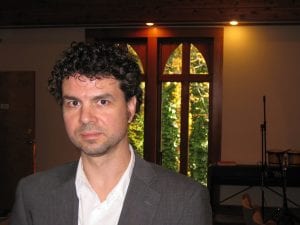 The only other work of the afternoon, Michael Kurth’s (at left) “Opting Out of Irony,” is a string quintet with percussion. His short bio in the program was a hoot: “Michael Kurth is 38 years old and has spent much of that time playing bass. He lives with his wife and three dogs in East Lake, near a really exclusive country club but also near several abandoned and burned out houses.… Of the three dogs, two and a half are deaf, one is senile, one has a nearly hairless hind end.… ” Before the music started, the composer explained the title: “Most people my generation really adore irony, but I think we should be able to opt out of it once in a while.” It’s in five movements and lasts about 30 minutes.

The first movement, “Dance Lesson,” opens with a Janacek-style cinematic scene, jittery and melancholy, like music from the Old Country, then neatly dissolves into a bouncy polka, with percussionist Charles Settle tapping sticks on the side of a drum and Douglas Sommer’s walking bass setting the pace. Dallow takes a solo cadenza, which goes increasingly out of whack. With loud hiccups as a sound effect, we realize that he’s supposed to be a village drunk. When Collins holds his viola between his knees, like a cello, and plays a tune, we realize this is a novelty piece.

But it’s charming and engaging too, and immediately the suspicion was that the highjinks masked something more substantive, much the way Kurt Weill’s saucy numbers hold a world-weary bittersweetness just under the surface. (“Dance Lessons” had a few Kurt Weill moments.) But that would mean the work is, in fact, ironic, with perhaps opposite meanings buried within. Kurth had already instructed us that this would not be the case.

The second movement, “Shall We Together Mourn the Passing of Our Former Selves,” is a dirge. Percussionist Settle slapped out a rhythm — or rather a mood — on the drum, and the others joined in, dark but not brooding. A violin line of some heft was stretched across the top, then picked up by the cello, until it all sank (momentarily) into an irony-free, rock-inflected, Hollywood jungle epic soundtrack. Oy.

“From a Lineage of Long Tall People,” the third movement, blossomed on gentle plucks all around, with a ravishingly lovely duet of violin harmonics its most memorable feature. Settle is an ace musician, but in general Kurth overplayed his percussionist. In “From a Lineage,” a small meaningful statement would gather force, only to be capped by a light cymbal crash, turning a potentially poignant moment into cliché. The two final movements were dominated by the percussion and were the weakest of the bunch.

Interesting personality: Kurth can be a facile composer, conversant in many styles, many voices, trying on many curious or silly masks. Just when he would skirt the rim of real emotion or meaningful dialogue, however, he’d revert to something “fun” or incongruous — as if there’s a penalty for honest communication. 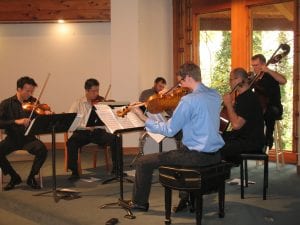