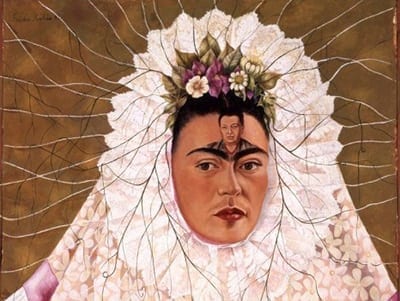 Frida Kahlo’s “Self-Portrait as Tehuana Diego in My Thoughts” (1943), oil on masonite, from the Jacques and Natasha Gelman Collection of Mexican Art.

Two of the most important Mexican artists of the 20th century take center stage in Atlanta with “Frida and Diego: Passion, Politics, and Painting,” on view through May 12 at the High Museum of Art. The museum long ago decided on a populist approach to its exhibition program, so it should come as no surprise that it has chosen to introduce its audience to Diego Rivera and Frida Kahlo not from an art-historical perspective but through the lens of their love of Mexico, shared politics and tumultuous personal life. Co-organized by the High Museum of Art, the Art Gallery of Ontario in Toronto and the Museo Dolores Olmedo in Mexico City, in association with the Vergel Foundation and the Jacques and Natasha Gelman Collection of Mexican Art, Galería Arvil, the exhibition, the largest ever of the couple’s work together, unfolds like a biographical map of their lives. Rivera was born in Mexico in 1886. At the age of 10 he began to paint, and his 1909 portrait “The Bullfighter,” one of the earliest in the show, makes clear that at an early age he was very competent with a brush. In 1907 he moved to Paris to continue his training, and there he soaked up the lessons of his avant-garde contemporaries. His “Farm Houses,” from 1914, clearly borrows from Cezanne, and there are numerous Cubist works that show the influence of Picasso and Braque. In his beautiful canvas “The Mathematician,” from 1919, the elongated features of the figure reveal the influence of his friend Modigliani.

After a year studying frescoes in Italy, Rivera returned to Mexico in 1921 and bloomed into a truly innovative artist. It is an interesting lesson for those fascinated by the current globalization of the art world. Here is a man who took what he had learned from his European counterparts, combined it with his love and passion for Mexico’s indigenous culture, and out of it created a voice distinctly his own. His palette became more vibrant, his subjects more animated, but he retained the abstraction of facial features, so his figures became less individual portraits and more representational of Everyman. Rivera’s “The Flowered Canoe” (1931), oil on canvas, from the collection of Museo Dolores Olmedo, Mexico City.

While Rivera was in Europe, Mexico had been embroiled in a revolution that lasted the better part of a decade. After his return his work became very political. He was a dedicated Communist who followed the 1917 Russian Revolution closely, and his canvases and lithographs exalted the generic proletarian worker. He lovingly rendered families selling their products in the market, as in “Flower Day” (1925) and “The Cabbage Seller” (1936). He was also commissioned to execute large-scale murals that were more revolutionary in flavor, such as “In the Arsenal” (1928), which celebrates citizens from the cities and countryside coming together to arm themselves in their fight for freedom.

It was during this time that he met Frida Kahlo. Twenty-one years his younger, she was a self-trained painter. She picked up a brush in 1925 while recuperating from a bus accident that would cause repercussions throughout her life, including an inability to have children. They met in 1927 and, not long after, Rivera painted her as the central figure of “In the Arsenal,” distributing guns to the masses. They were married in 1929.

Rivera was revered during his lifetime. His ability to visually capture the essence of a political and social moment was appreciated in his own country and beyond. During the early 1930s, in San Francisco, Detroit and New York, U.S. industrialists commissioned large-scale murals from him that celebrated the country’s progress and industrialization. Meanwhile, Kahlo painted small, introspective works that were a salve for her soul. She made the gut-wrenching “Henry Ford Hospital” (1932) after suffering a miscarriage. Lying in a bed with stained sheets, she is connected by strings to the elements that define her, including her damaged pelvis and the dead baby. The bed is stranded in a barren landscape with industrial Detroit on the horizon, a potent symbol for the isolation she must have felt in a foreign land.

Kahlo also created a highly critical collage of New York, called “My Dress Hangs Here,” in 1933. This extremely dense composition highlights the Depression-era social decay she was witnessing, including long food lines and a lady of the evening peering from an upstairs window. At the time, her husband was painting a mural for Abby and John D. Rockefeller Jr. in the lobby of their newly built Rockefeller Plaza. The contrast between the two worlds of New York must have appeared quite stark to them both.

But that was not the first overtly political work that Kahlo, also a registered Communist, had painted. In 1929, she produced “The Bus,” in which three groups of people line a bench facing the viewer. The first two appear to be a middle-class couple, she with basket in hand probably going to the market and he with a metal tool headed for work. Next to them sits a peasant woman with her baby in a sling across her chest. Their belongings, tied in a simple scarf, rest on the floor next to her bare feet. The remainder of the bench is occupied by a couple and their son, who peers out of a window with his back to the viewer. Their European facial features and smart dress indicate their superior status, even apart from the sack of coins the father appears to be holding. This comment on the disparity of wealth and its connection to Spanish colonialism can be strongly felt.

A section of Kahlo’s still lifes is included, but it is the wall of her self-portraits that steals the show. Of the 143 works she painted before her death at age 47, some 55 were self-portraits. These Surrealist-inspired works — she always resisted that label though she showed with the Surrealists in Paris and New York — illustrate a dramatic change from the young new wife suffering numerous miscarriages and surgeries to the defiant, strong, confident woman she became.

Nowhere is this more evident than in her 1940 “Self-Portrait With Cropped Hair.” When it was painted, Frida had divorced Diego after discovering that he had had an affair with her sister. She stands tall, dressed in a man’s suit, with the beautiful long hair that Diego loved strewn across the floor around her. At the top of the frame she has written a musical score and lyrics that read, “See, if I loved you it was for your hair; now you’re bald, I don’t love you anymore.” The self-assurance and determination in her stance are palpable. Kahlo’s “The Broken Column” (1944), oil on canvas, from the collection of Museo Dolores Olmedo, Mexico City.

The couple remarried after a year. Kahlo’s medical condition continued to deteriorate, but her poise did not. “Broken Column,” from 1944, one of the most moving self-portraits, shows her frail upper body encased in a brace with a steel rod for a spine while she gazes directly at the viewer, challenging us to show her no pity. Works like these, which continue to touch viewers, have propelled her reputation, which has now eclipsed that of her husband.

As a couple, the two will forever remain mythical symbols of a generation struggling to form a true Mexican identity. The question is whether this is the best way to consider their work. Unlike Christo and Jeanne Claude or Claus Oldenburg and Coosje Van Bruggen, these artists were not collaborators. Nor were they working in a similar style. They are more like Alfred Steiglitz and Georgia O’Keeffe or Bruce Nauman and Susan Rothenberg, artists whose shared a life but made distinctly different work.

The biographical hook may bring visitors through the door, but will it help them connect the art-historical dots that lead to deep understanding? It would be more illuminating for viewers to know that Hale Woodruff studied for a summer with Rivera in Mexico in 1936, just a short time before he began the Talladega murals that were shown at the High last year. Or that Kahlo’s work was shown with three of the Surrealist artists included in the High’s recent “Fast Forward” exhibition: Rene Magritte, Max Ernst and Salvador Dali. In contrast, knowing that Rivera condoned Kahlo’s female lovers, noted in a wall text, does not alter the way I read their paintings.

Furthermore, curators Elliott King and Dot Tuer don’t argue the premise as well as they could have. It would have been interesting to see Rivera’s murals, represented here by large photographs, more closely juxtaposed with Kahlo’s overtly political works. Kahlo’s very insightful late paintings, which look out of place in the gallery of documentary photographs, would have been more fitting as an expansion of the conversation about her relationship with Diego in the room before.

The High should, however, be commended for its efforts to reach out to the Hispanic community. This is its first fully bilingual exhibition, with wall texts, audio tour and Sunday docent tours all in both English and Spanish. And, as frail as the premise may be, the opportunity to see such a breadth of work by these two artists should not be missed.