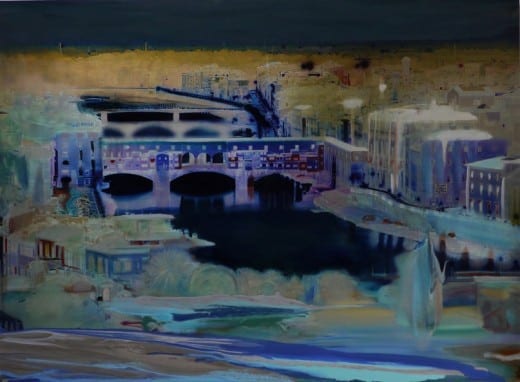 Can we love something too much? Specifically, a building, monument or natural site? “Grand Tour,” Kim Anno‘s new body of paintings at Marcia Wood Gallery through March 2, explores notions surrounding the environmental impacts of tourism, with spectacular effect.

All those beloved foreign destinations — the kind that people plan their travel itineraries around and sometimes spend their entire life savings to see, explore and document — are subject to the wear and tear of millions of tourists. The most well-traveled spots on earth, the cultural meccas we hold so dear, are affected in innumerable ways by mass tourism, man-made climate change and the politics of the governmental agencies entrusted with their protection. For the tourist, there will always be a certain type of guilt that comes with this recognition.

Anno’s paintings conjure up these sorts of associations and mixed feelings. She has chosen some of the most iconic destinations and manipulated them in various ways to represent the physical degradation wrought upon them. Photographic images of buildings or landscapes printed by ink jet onto canvas or aluminum are the basis; the artist then adds oil paint using a variety of methods.

Marrying her previously nonrepresentational painting style with her proficiency with photography, Anno has created a series of multimedia works of eye-popping luminosity. In “Florence,” for example, her photographic negative of the Ponte Vecchio glows with high-intensity hues of blue, green and gold. Black water moves like a snake through the detailed cityscape and in the foreground melts into an abstract sweeping swath of swirling pools. Its metallic golden background recalls Byzantine art; tiny details of the scene evoke the handiwork found in traditional Japanese fabric arts.

It is unclear what kind of catastrophe has befallen some of the scenes chosen: the Thames River in London, the Bay Bridge, a Miami resort hotel. What is clear is that something, suggested by the color palette or “alien” intrusions of thick swaths of paint or both, has gone wrong. And although this sentiment can be felt, ultimately the juxtaposition of the photographic image with the painterly techniques creates a dialogue that gives the weight of the story an internal sense of poetry. “Paris,” a bird’s-eye view of the Eiffel Tower and the many street grids surrounding it, is rendered in hot, toxic magentas and black. A metallic blue haze sweeps through the atmosphere; warm plops of blue and orange paint dot the landscape like water bombs of acid rain. Pollution and climate change are both suggested within this nostalgic but chilling scene.

Climate change has been of particular concern to Anno; anxiety about rising water levels has informed her experimental video and photography projects. Her current series extends some of the symbolism of liquidity, flow, flux and change through the physical manipulation of paint. By pouring paint across the surface with a marbleizing technique and by manipulating the ink-jet images by tilting and wiping the surface, the structures and landscapes appear warped and distorted in strategic areas. This can be seen in “St. Marks,” a straight-ahead view of the Venice cathedral in which the addition of Anno’s manipulations suggests air pollution and the inevitable decay of cultural artifacts.

With “Vernal Falls,” the manipulations of surface paint are more subtle. Here she adds transparent veils of color to the image of the famous Yosemite Park attraction. The visual contradiction between the image and the applied brushstrokes acts as a metaphor for the mark of the human hand on the landscape.

This metaphor is taken even further in “Desert,” in which a bar code-like prism of vertical color bands rests on the surface of an out-of-focus desert vista. The harsh overlay of bold, “man-made” strokes on the digital perfection of the “natural” image gets to the heart of Anno’s narratives, especially those centered on landscapes. Initially we are drawn in to the beauty of these locales, but their manipulation suggests the scarring of these once-pristine areas, the irretrievable loss of purity over time.