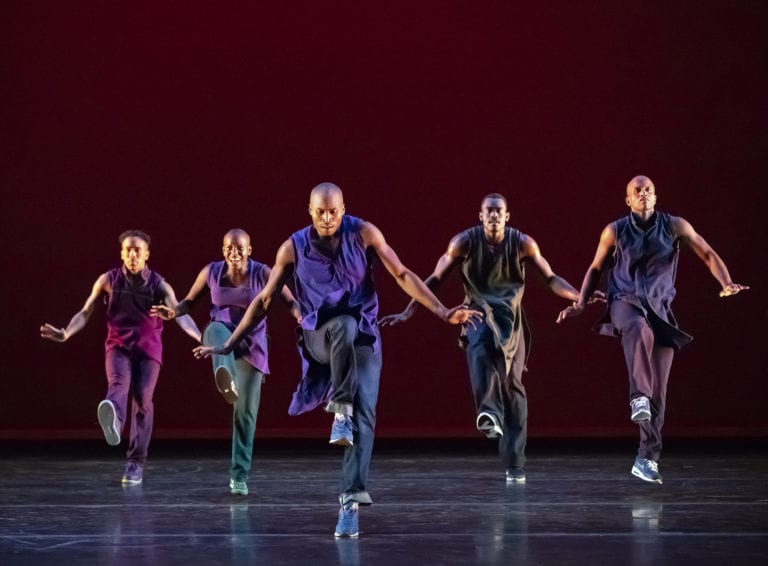 A subtle drone of synthesizer music filled the void of the pitch-black stage as a sparse light crept in from across the wings. Shadowy figures entered and exited slowly through the oppressive weight of nebulous tones and darkness, and then flash! A brilliant burst of light revealed a bare-chested man center stage wheezing, coughing and gasping for air.

It was the beginning of Rennie Harris’ Lazarus, which received its Atlanta premiere last weekend at the Fox Theatre as part of the Alvin Ailey American Dance Theater’s 60th-anniversary season. Performed by 15 company members, it is the first two-act piece commissioned by the company.

Inspired by the life of Alvin Ailey, Lazarus asks questions about life, death and rebirth while amplifying movement of the African diaspora as a mode of resistance and resilience, forged throughout a history of oppression.

Alvin Ailey grew up in the South during the Great Depression. His life’s work drew on the embodied history of African American experiences and cultural practices — “blood memories” of everyday movements from home, the church and the clubs. He brought this history to life through performance. He gave black dancers opportunities to grow their artistry and dancers of all racial identities to perform his works and the works of other contemporary choreographers. How does such an iconic company that has significantly shaped the modern dance canon for so long breathe new life into itself? Lazarus offered a glimpse into what is possible.

The dancers began in costumes that recalled the antebellum South; transitioned to 1950s Civil Rights Movement-era slacks, long skirts and collared tops; and ended in Wakanda-esque gold-trimmed purple tunics and gold arm bands, affirming a journey from bondage toward an optimistic Afrofuture.

Act I offered somber gestural representations of grief, brutality and persecution. Dancers’ pleading hands shook in prayer. Their torsos quaked as their mouths fell agape as if in horrific pain. Bent-legged with heads hanging low, they slowly made their way across the stage into the light, illuminating a path toward something ominous. In this moment, they were the downtrodden, suffering, merely surviving.

The next moment, they appeared as bodies hanging from invisible trees, heads drooping, lifeless shoulders slumped, swaying in some sort of sick breeze as hushed indecipherable murmurs (like ancestors whispering their secrets) wafted through this forest of the dead . . . and then flash! Again, a brilliant light sparked just as a dancer placed his palm on the forehead of the previously bare-chested man, standing center stage once more, prompting him to fall backward into the arms of another. Had he caught the spirit, been anointed? Was he dead? And would he be resurrected?

Harris said in a preview video that he was interested in the “spirit reincarnating itself into a different existence” by reflecting on Ailey’s life, the discrimination and racism he experienced and the ways in which he navigated, survived and thrived through his artistic labor. This registered in the “cotton field” of bodies, created by dancers lying on their backs with their arms hypnotically swerving and swaying above them. Other dancers walked through the field, picked the imaginary cotton and placed it into their invisible satchels, reminding us that America was built on black labor.

The second act offered gestures of black resistance, joy and power. “Glory, Glory,” a gospel song set to an infectious house beat, awakened dancers’ bodies and jolted them to life. The dancers caught the rhythm with intricate up-tempo foot patterns, infused with Afrobeats movement like the Gwara Gwara from South Africa and current hip-hop dance trends like the Milly Rock and the dab. Movements such as these have been preserved by African-descended communities across the world through oral history traditions and embodied memory. Such communities continuously create them through daily experience and encounters with new social realities and innovate them through technology and new modes of global exchange.

Harris’ hip-hop theater manifested the multivalence of African diasporic forms, opening up opportunities for audience members to find their own entry points into the movement. His Philadelphia house dance footwork could be read as a jig, a game of hopscotch, the Detroit Jit, Chicago house or New Orleans second line dancing. That smooth, controlled floor work, calmly flowing between planks, seated poses, handstands and other inversions, could be understood as breakdancing or Capoeira (an Afro-Brazilian martial art).

Though all discrete and unique forms, their connection to a people and its history was felt. And the audience clapped and cheered for these vernacular techniques — virtuosic in their realness, their complex body rhythms and their nuanced histories — rather than for the quadruple pirouette or high leg extension. Such tropes of the Ailey lineage made no appearance in this particular work.

Throughout the work were audio excerpts of a television interview with Mr. Ailey, paired with Harris’ voice to create a conversation with this ancestor from beyond the grave. Among other things, they talked about possibility, a “chalk outline around the body of the potential of Negro life.” Literally, it can be taken as a reflection of the loss of our leaders and the great potential they held in the fight for liberation, or the toll racial violence can take on our communities. Metaphorically, it can speak to the tension between momentum and stagnation, tradition and innovation, or the relevant and the obsolete. These are important themes for a company celebrating its 60th anniversary.

By placing Lazarus directly ahead of Ailey’s Revelations in the evening’s program order, a whole new light was shed on the 59-year-old work. This juxtaposition revealed past and future selves talking to each other, intersecting at times and diverging at others. We could see where we have been and where we can go if we continue to acknowledge and value the ways history moves in our bodies. Imagine the possibility if the conversation kept going with men and women choreographers, who, like Harris, amplify the movements of a people emerging through the daily lived experiences taking place in our communities.