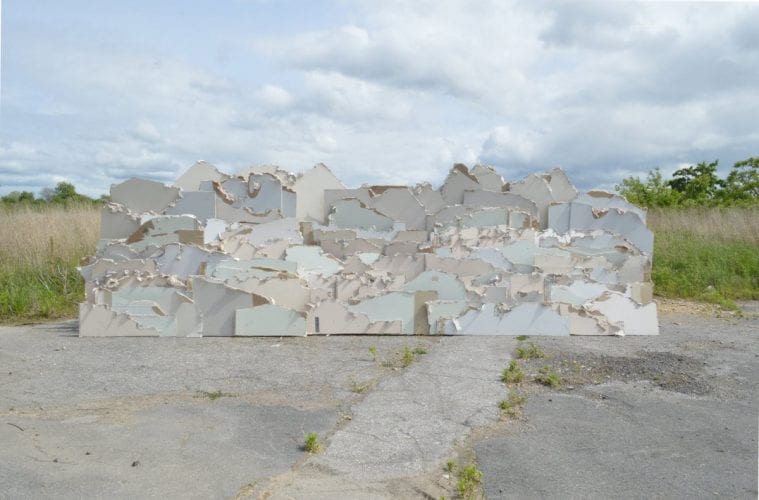 “Reconstructions” evokes the futility and transience of our built environments

In the new group show Reconstructions at Swan Coach House Gallery through February 16, ordinary elements of the built environment serve as the springboard for examination of evolving urban landscapes. Many of the pieces resemble artifacts that have been intercepted somewhere along the path to becoming relics, recovered to help us rethink their presence as markers of memory.

Krista Clark’s aptly titled Recover confronts the viewer immediately upon entering the gallery. Composed of construction materials and a looping video of the Georgia Archives building implosion in 2017, Recover evokes the appearance of a construction (or deconstruction) zone using a huge tarp, while the audio of demolition amounts to a soundtrack for the entire exhibition. The remnants of that destruction might have easily ended up at a place like RAIR (Recycled Artist in Residency) in Philadelphia, where artist Zena Zakanycz created Don’t Hold Onto That…hold onto this using discarded sheetrock. Placed together, the works serve as an initiating visual reminder that the materials used to create a structure and the materials hauled away after demolition are the same.

The found objects of Joe Bigley’s Emblem and Trevor Reese’s backyard boulevard provide a physical intimacy with external design elements such as gates and signs from prior eras, objects that seem to be disappearing as newer architectural styles and innovations take precedence. What happens to the discarded items in a gentrifying area once a business closes or a house is demolished in favor of something new? Which items hold residual value for repurposing, and who determines that value? 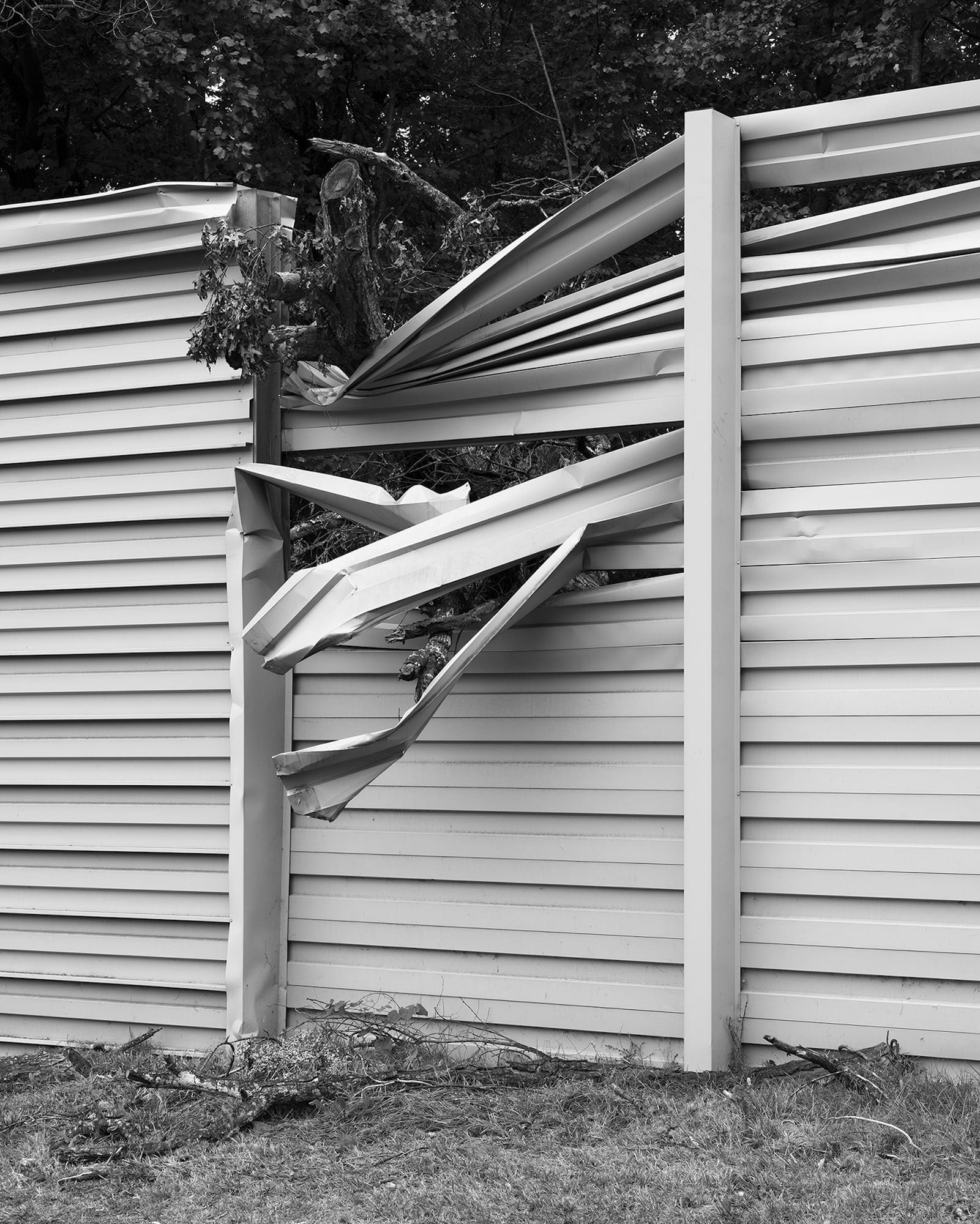 The black-and-white photographs of both Spencer Maxwell and Rusty Miller consider spaces that are easy to overlook or that exist in some state of being forgotten. Maxwell’s work highlights roadside scenarios usually observed by car that we rarely investigate up close, while Miller’s photographs give a glimpse into an Atlanta history that often goes unexamined.

Untitled photographs by Miller, an Atlanta street photographer who died in 1992, are the surprise of the exhibition and capture a moment in time — or at least a feeling — that might be foreign to all but older Atlantans. The photos presented here are from a larger trove documenting some of the eerily mundane aspects of 1960s Atlanta during the Civil Rights Movement (sometimes referred to as the Second Reconstruction), focusing on the Summerhill and Washington-Rawson neighborhoods that were demolished in whole or in part to make way for the former Atlanta-Fulton County Stadium. Photos depict ordinary scenes, from garments on a clothesline to a church. Just five of Miller’s images are on display here, but Atlantans will be able to see more as the first comprehensive exhibition of his work debuts later this year at Gallery 72.

Viewers are more likely to notice Meta Gary’s Fort 06: Fort Tulipa on leaving the gallery space than when entering it, and in this sense the work functions as a coda for the exhibition, inviting viewers to examine this exterior fort-like structure in juxtaposition with the work in the gallery and contemplate how it effectively encapsulates many of the ideas inside. Forts were constructed to protect and project safety, guarding whatever is valued or offering a last defense from an outside threat. Thus, Fort 06: Fort Tulipa begs the question: Are we seeking protection from change in/of the built environment? And given the state of this particular ramshackle structure, is that ultimately a futile attempt?

Given the themes that weave together work in the show, the inclusion of Katie Hargrave’s Reading White Pines Project and Martha Whittington’s FPSS (First People Smoke Signal) is hard to grasp. The works reference relationships between American colonists and the King of England, and early European traders and Native Americans, respectively, but their connections to the rest of the show seem tenuous. They seem more in conversation with each other than with other works in the exhibition.

While the show’s title loosely refers to America’s Reconstruction Eras, most of the work refers to the present rather than invoking any deeper consideration of those pivotal times in the country’s history. The term “reconstruction” may hang heavily in the air, but the works themselves don’t carry that weight. And perhaps that’s a good thing. The works are light, effectively beckoning the viewer to revisit feelings about the structures we build and destroy rather than delving into the fraught territory of post-slavery America or the Civil Rights Movement.

In a city with new construction dominating every urban landscape, residents of metropolitan Atlanta often find it difficult to grasp the rate of change in local neighborhoods relative to prior generations, and even harder to forecast the ramifications of those changes on communities connected to those places. Reconstructions helps us pause to reexamine the possibilities that exist between the jettisoning of the old and the uncertainty of the new.