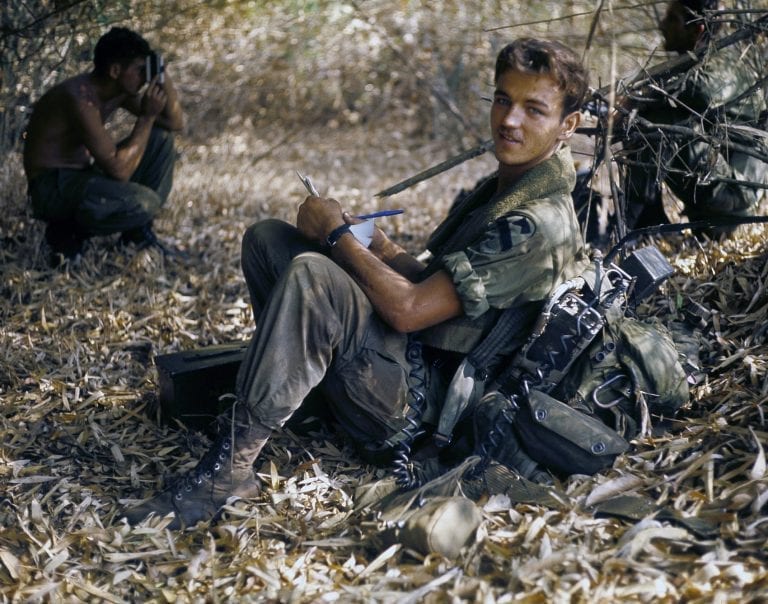 A photo taken by James H. Holcombe, Jr., circa 1970, shows Bill Narkis of C Company, ⅖ Regiment, 1st Cavalry, writing a letter in South Vietnam. Holcombe donated the photo to the Atlanta History Center. The image and many others are included along with artifacts and oral histories in the exhibition More Than Self: Living the Vietnam War.

“The war occurred half a lifetime ago,” wrote Vietnam veteran Tim O’Brien, “and yet, the remembering makes it now. And sometimes remembering will lead to a story which makes it forever.”

Between 1964 and 1975, nearly 3.5 million men and women served in the United States armed forces in Southeast Asia. More Than Self: Living the Vietnam War, currently on view in McElreath Hall at the Atlanta History Center through March 18, honors their service by honoring well the very few, and, in so doing, bringing to life a pivotal moment in history. By sharing stories culled from 650 oral histories preserved in the Kenan Research Center’s Veterans History Project, More Than Self vivifies the war through the stories, photographs and artifacts of men and women who served in Vietnam, many donated by members of the Atlanta Vietnam Veterans Business Association (AVVBA) and their families.

The exhibition takes its title from a verse of  Katherine Bates’s 1911 poem America the Beautiful:

O beautiful for heroes proved in liberating strife,
Who more than self their country loved,
And mercy more than life!

Don’t be persuaded, however, that this is mere hagiography. Full of grace, intelligence and a keen sensitivity, More Than Self is the finest exhibition on the Vietnam War I’ve encountered.

Curator Sue Verhoef, the Atlanta History Center’s director of oral history and genealogy, has proven the adage that the personal, when told well and deeply enough, can become universal. Firsthand narrative sets the tone. In the atrium are two opportunities to experience the war and its times through the eyes of those who were there. One such person was Camilla Chipley Meyerson, an American Red Cross worker known as a Donut Dollie, young women who were selected to help provide a touch of home for military personnel serving in Vietnam. Selections from her two hours of grainy 1967 amateur film footage she made during her time in Vietnam are paired with a soundtrack of iconic songs from the era. Aretha Franklin’s “Chain of Fools” and Creedence Clearwater Revival’s anthemic “Fortunate Son” accompany a pageant of evocative scenes: red dust kicked up by helicopter rotor wash, dark green fatigues, the pale green geometry of rice paddies seen from the open door of a helicopter.

A second screen offers visitors the chance to listen to the unmediated stories of those who were there. The AVVBA and its members have worked in partnership with the Atlanta History Center to develop the Vietnam Legacy Project in order to accurately preserve and communicate the experiences of Vietnam veterans. Among them are an Army nurse recalling her first 24 hours in Vietnam, an Army platoon leader describing friendly fire and a former POW recounting interrogation while imprisoned in the “Hanoi Hilton.” Army platoon leader James King describes the intense heat that greeted him upon arrival before “reality set in” as he took his first steps across the tarmac and saw an Air Force C-141 Starlifter loading coffins and body bags.

Verhoef organizes her curatorial efforts around six common themes that recurred in the testimonials, which she identifies as: first impressions; living conditions; combat; the Vietnamese people; POWs and MIAs; and coming home. The exhibition roughly follows these themes chronologically.

A vitrine containing two very different but equally memorable items of footwear stands at the entry to the gallery and anticipates the tone of the exhibition. One, a worn and faded pair of US Military issue, 1964–1975 combat boots — the other, dép lóp, a pair of what American soldiers called “Ho Chi Minh” sandals, handmade from recycled tires and worn by the North Vietnamese. A colorful map of South Vietnam printed by the Associated Press shows the country as it was in 1965, the year Lyndon Johnson first sent American troops, and reminds just how little we knew about it. Text on the map asks the evocative, open-ended questions, “What kind of place is Viet Nam and what kind of war is it?”

Three photographs, courtesy of the US Army Quartermaster Museum, with titles such as Human Remains Shipping Containers, show white rectangles stacked on the tarmac like so many anonymous bricks in a wall. Verhoef’s text balances the starkness of such images with words that deepen our understanding of what’s depicted: Mortuary personnel removed “anything that could be considered painful for the family, such as photographs or letters that revealed an illicit affair,” meaning that they often read letters from the deceased’s family and “saw photographs of babies that the deceased never met, making a morbid task an emotional one as well.”

In another image, two Viet Cong, possibly brothers, killed by ARVN (the South Vietnamese Army of the Republic of Vietnam) forces in 1970, stare back at us in a photograph carried by one of the two dead men. The photo was donated by a US Army captain who was given the photograph by an ARVN soldier and who carried it for the duration of his time in Vietnam to remind himself that “they [the enemy, too] were putting their lives on the line every day to defend their country. . . . They were someone’s sons just like we were.”

Day-to-day objects make the grind real: a Boonie Hat, C-rations, insect repellent. Others make the threat real: an M-1 helmet (affectionately referred to by soldiers as a “steel pot”) is on loan from the soldier whose life it saved when a bullet glanced off it. A draft notice dated October 27, 1966, hangs as a tactile reminder that 2.2 million American men were drafted from 1964 to 1973. (Fortunately, this draftee survived to return and donate it to the exhibition.) A small, bloodied notebook taken from a North Vietnamese prisoner contains sketches and diagrams that appear to be battle plans alongside a Viet Cong hand grenade.

A handmade crossbow with a quiver of arrows carried by the indigenous Montagnard who fought alongside US forces against North Vietnamese or Viet Cong were gifts to a US Army nurse by the father of a child she had treated in an evacuation hospital. It is hard not to feel a tender sense of loss upon seeing the fragile, tissue-thin homemade North Vietnamese flag stitched in yellow, sky blue and faded red and carried into battle before it, too, like so much else, was lost. (Admittedly, any sense of a near-tenderness is easier to feel in the absence of the kind of fear instilled in those who saw it in battle.)

Many of the photographs included here are as immediate and effective as those included in the widely acclaimed 2013 exhibition and book Vietnam: The Real War: A Photographic History by the Associated Press. From times of boredom and monotony, so pronounced on such young faces while card playing, letter-reading or attempting to relax in a hammock in a jungle, to times of crisis, as doctors and nurses scrambled to protect patients as a hospital came under attack, the images capture the truth of the moment.

The percussive sound of helicopter blades compressing air, a defining sound of the Vietnam War, serves as a haunting accompaniment to an impressive wall-sized photograph of UH-1 “Huey” helicopters approaching a landing zone. Arguably, no other sound has such an ability to conjure the war or to send its veterans back to their time there. This, too, Verhoef handled deftly by inquiring of several of those involved veterans whether or not to include the audio recording of the Huey, as important as it was. All but one of those queried wanted to include it, but he, too, acquiesced when he saw how important it was to the rest.

Not to be missed is the deeply moving collection of POW and MIA artifacts, photographs and stories, which speak for themselves. These I leave to your discovery as one of the exhibition’s greatest strengths.

There is always a gap between knowing and not knowing, between those who were there and those who were not. By seeking to deliver the unmediated truth from the men and women who were there, More Than Self: Living the Vietnam War moves us toward closing that gap.

O’Brien tells another story about a character who, in the “ordinary hours of life,” years after the fact, tries not to dwell on the war or on a young man he killed there. But sometimes, he recounts, “I’ll look up and see the young man coming out of the morning fog. I’ll watch him walk toward me, his shoulders slightly stooped, his head cocked to the side, and he’ll pass within a few yards of me and suddenly smile at some secret thought and then continue up the trail to where it bends back into the fog.”

Memory is like that, too. With story, insight and sensitivity, More Than Self: Living the Vietnam War stills the moment in time that was the Vietnam War before it can slip back into the fog of time.