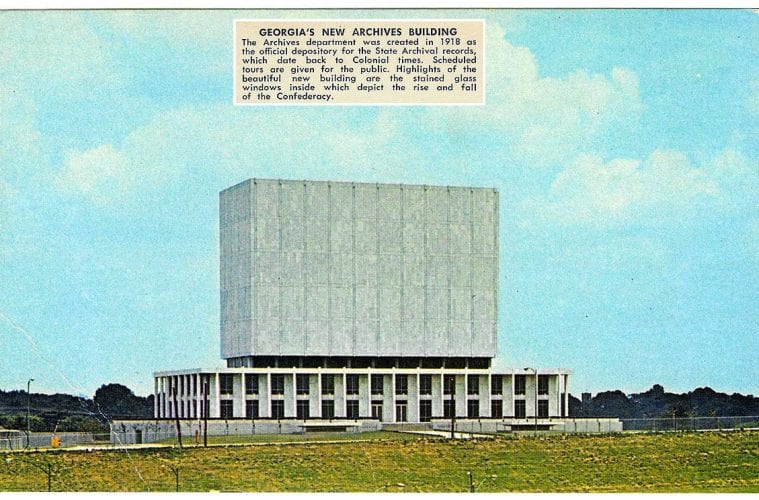 It’s been likened to a big white ice cube and has served as the setting for a range of movies, including a cameo as the headquarters of a company that works on “human enhancements” in the Marvel Universe. However, the unique mid-century modern Georgia Archives Building, perched on the precipices of Interstates 20, 75, and 85, is soon to be added to the constantly growing list of Atlanta buildings that were.

Designed by one of our own, Georgia Tech-trained architect A. Thomas Bradbury (1902-1992), the building opened in 1965 to house the state’s archives. Built for just $6.3 million, the facility was heralded as a state-of-the-art archive, allowing the public access to a treasure trove of history.

Construction of an archives building came after 15 years of efforts by Georgia Secretary of State Ben W. Fortson Jr. — whom the building was ultimately named for — and a grassroots effort from across the state to preserve the history of Georgia. The intent was to provide a modern space to better protect the too-long neglected heritage of the state (which seems ironic now). Until that point, the state’s archives were housed in Rhodes Hall — a space ill-suited to the task, according to an article from the Georgia Department of Archives and History.

Upon opening, the building was heralded as “one of the foremost archival buildings in America and the world,” marking a great success for Bradbury.

The building is an example of stripped-down classicism, fused with regional vernacular architecture. The columns of the portico evoke images of neo-classical municipal buildings which imbue a sense of stability and history. The colonnade surrounding the building seems to pay homage to the stately old antebellum mansions of a more genteel portrayal of Atlanta — not unlike the Georgia Governor’s mansion which Bradbury would go on to design the next year.

Austere and monolithic, the white, windowless marble clad mass of the archives rises above the more classical pedestal — a union of classical proportions and mid-century modern minimalistic expression. Juxtaposed to the outright classicism of the nearby Georgia State Capitol building and other older government facilities, the sleek lines, boxy geometry and autocentric layout reveal the building’s vintage.

Seemingly an object in a field, the building is viewed from afar via passing cars on the interstate, or from across expansive parking lots. Sited on a plinth at the center of the block, the arrangement of the building gives a sense of importance and regality to the archives, indicating the value of the knowledge contained within. (Or formerly, anyways.)

A victim of the Freeing the Freeways project of the 1980s, a change in stylistic preference, the waning supremacy of paper records, or perhaps some combination of the three, the building was abandoned by the Georgia State Archives 13 years ago. Many reports claim that local engineers determined that the building was sinking due to subterranean conditions and settlement exacerbated by the ever-encroaching interstate.

While the building was granted a reprieve during the Recession, plans for the new Georgia Supreme Court complex, designed by Stevens & Wilkinson, now hint at the building’s pending demise — promised before the end of the year.

Alas, Atlanta’s iconic archives building will soon be but a memory and stack of images, relegated to some folder in the new Georgia Archives in Morrow.