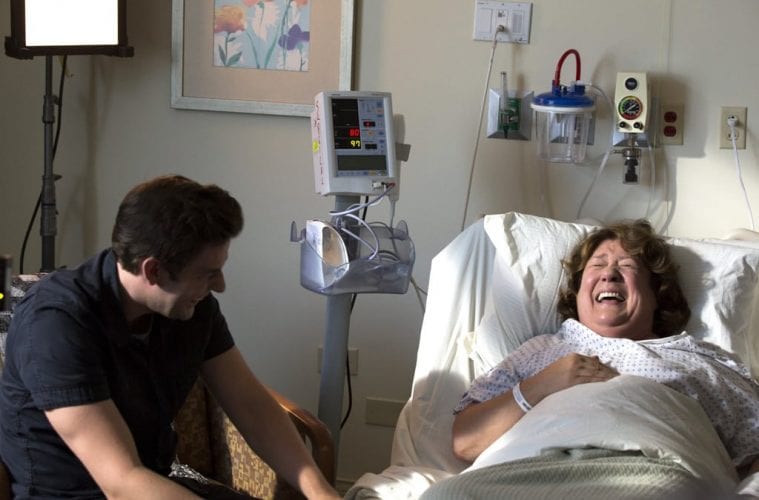 Review: “The Hollars” succeeds despite itself; in “The JT LeRoy Story,” the con job continues

The Hollars checklists some of the laziest clichés of American-indie, dysfunctional-family movies of the past 20 years. And yet, though it makes so many missteps for more than half its running time, it won me over, emotionally, by the end.

That mainly has to do with actress Margo Martindale (Emmy winner for Justified and The Americans). She’s no Streep (her co-star in August: Osage County). But inside her narrower range, Martindale is somebody I’d watch in just about any context.

Here she plays Sally Hollar, the mother of John (John Krasinski, who directed) and Ron (Sharlto Copley), and wife to Don (Richard Jenkins). If the Ron-Don-John names aren’t enough to put your back up, just wait.

Ron works with their dad in the family’s small-town heat-and-air business. He also lives at his parents’ house, having gone through a messy divorce and losing custody of his two little girls to his ex-wife Stacey (Ashley Dyke). So both Ron and Don are at home the morning Sally collapses on the bathroom floor. John, on the other hand, has to be hauled back to town from New York. He struggles there as an illustrator, and he has a rich girlfriend, Rebecca (Anna Kendrick), who designs pet costumes (I know, right?) and is about to give birth to their baby.

Back home, John learns that his mom has a massive brain tumor, previously undiagnosed even though she’s shared worrying symptoms — loss of vision, numbness, temporary paralysis — with her husband for many months. “He sent me to Jenny Craig,” she sighs. It’s a good line, funny but revealing about the sorts of compromises, excuses and loving blindness that come with a longtime marriage. The movie needs more of those.

Screenwriter Jim Strouse’s city-boy-goes-back-home-to-tend-to-ailing-parent plotline is one we’ve seen plenty of times. Other People with Molly Shannon, also in theaters now, has the exact same plot engine. The Hollars throws in the expected sampling of colorful complications the sitch requires. Divorced Ron is basically stalking his ex-family, though Stacey is now dating the smugly affable youth minister (singer Josh Groban, smugly affable). Sally’s uptight male nurse Jason (Charlie Day) is now married to John’s childhood sweetheart Gwen (Mary Elizabeth Winstead), who wouldn’t mind reigniting those old high school sparks. And Rebecca takes a third-trimester cab ride halfway across the country to be with John, with whom she hasn’t shared one vital fact about her pregnancy.

The movie is filled with a top-notch cast, from Kendrick, who gives emotional grounding to her kooky-rich-girlfriend role, to Mary Kay Place in a throwaway scene as Don’s sister and secretary. But whatever (uneven) success the movie achieves is mainly Martindale’s doing. Sure, she does the show-off, actor-y thing, having her head shaved onscreen. But she’s most effective in the quiet, laser precision of smaller moments. When John shares with her some news about his impending fatherhood, she quietly, correctly observes, “And you’re terrified.” The mother-son moment that follows feels so loving and real, you forget how fake much of the rest of the movie is.

If you don’t know what the LeRoy phenomenon was, that means you didn’t waste any time on a lot of not much. In short, in 1999, a young man claiming to be the sexually ambivalent, gender-fluid, HIV-positive son of a single mom who turned tricks in Appalachian truck stops published a novel called Sarah (named for that paragon of motherhood) and a collection of stories titled The Heart Is Deceitful Above All Things. This kid, JT LeRoy, reached out to outsider writers like Dennis Cooper and became a cause célèbre. Will the real JT LeRoy please stand up?

There’s some Schadenfreude to be had in seeing the hipster cognoscenti of the time (Gus Van Sant, Courtney Love, Winona Ryder, Bono, Mary Karr, Billy Corgan) stumble over themselves to marvel at the “authenticity” of LeRoy’s writing. And about those stories and Sarah? The tales of white-trash people beset by prostitution, substance abuse, homophobia and alcoholism aren’t so much stories as a string of bullet points designed to gain attention and descriptions like “deep” and “real.”

Laura Albert knew the right buttons to push to entrap well-meaning (if sometimes self-serving) people. Hindsight is 20/20, but even before Albert nudged her sister-in-law, Savannah Knoop, in front of the press, wearing a $5 wig and big sunglasses and pretending to be LeRoy, the whole enterprise smelled of bullshit. Albert, speaking to the camera for much of the movie and offering home videos and photos of herself as a chubby kid, paints herself as a damaged soul. Damaged like a fox.

The movie comes to screens with a new footnote. The audio clips of phone conversations (with celebrities like Love and Van Sant and especially Asia Argento, the Italian actress who directed a film version of The Heart Is Deceitful Above All Things) give the documentary a can-you-believe-they-fell-for-this kick. Problem is, Albert made those recordings without the people on the other end of the phone knowing they were being taped. That’s illegal in California. The hoax may have been exposed. But the con continues.