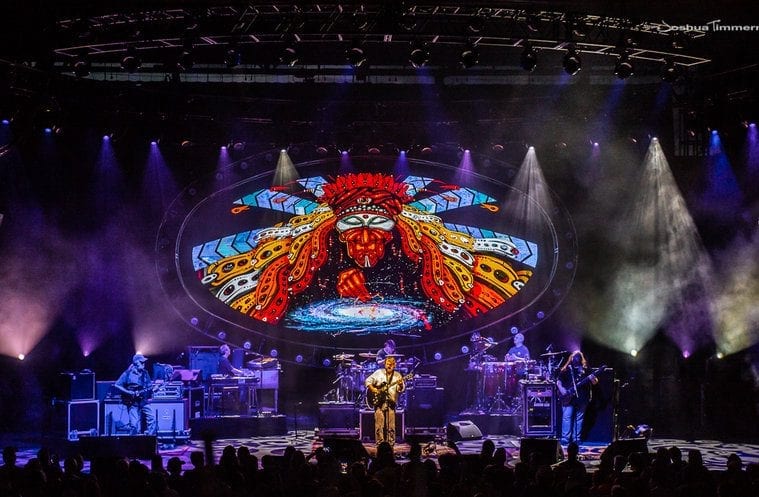 Duane Trucks moved to Atlanta several years ago to perform with Colonel Bruce Hampton then began to play with Widespread Panic three years ago before officially joining the band. Widespread Panic concludes a three-night stand at the Fox Theatre tonight.

Trucks sat down with ArtsATL to reflect upon family and mentor music legend losses, finding his groove with Widespread Panic and the lessons life has taught.

ArtsATL: Who are your top musical heroes?

Duane Trucks: The Colonel (Colonel Bruce Hampton), for sure. John Coltrane is a definite, and Duane and Gregg Allman. Duane gave my family this whole world we lived in; what he and his brother did laid the foundation. These musicians have always been my heroes and provide inspiration — not to mention, someone to look up to. They made musical statements, which impacted everything that came after them. Drummer-wise, I love Elvin Jones, Bernard Purdie and Levon Helm. But over the last five years, I’ve discovered more modern music, which has inspired and influenced me quite a bit.

ArtsATL: What have you learned from Widespread Panic about being in a band that you didn’t know before?

Trucks: Playing with Widespread Panic has been a huge eye-opener on the relevancy of music because they have such a vast catalog of songs. It took me a while to wrap my head around learning that whole catalog, which has so much rock ‘n’ roll and improvisation — all which includes the fans and allows them to relate. Where I came from in the jazz world, at least, the casual fan can sometimes get left behind. But with bands like Widespread Panic, the music is accessible and audiences can come right along. I learned that this is a very sophisticated thing to be done. The Allmans led the charge with this style in the late ’60s and early ’70s by offering fun music you could sing along to — but also offering moments of total depth and experimentation, which can never be replicated. I often think I don’t exactly know how we are going to get from this song to the next, but we all trust each other. Learning to trust in each other has been invaluable. ArtsATL: What’s it like playing with your father-in-law, Jimmy Herring?

Trucks: Jimmy makes you dig really deep each night. He lives up to and epitomizes what the Colonel used to always drill into everyone that ever took a seat in his van — the idea of not taking yourself seriously but taking what you do seriously. Jimmy is the most humble guy, but he takes his playing very seriously, and to be so technically proficient but not be flashy is a special thing. It’s amazing to play with Jimmy — as it is to play with all the guys in Widespread Panic. The freedom they allow is incredible.

ArtsATL: Speaking of freedom and being the newest and youngest member, do you feel the other members of Widespread Panic encourage you to express your take on things and allow you to add creatively?

Trucks: Absolutely. I feel there is so much beauty and freedom in the way J.B. [John Bell], JoJo [John Hermann], Sony [Domingo S. Ortiz] and Dave [Dave Schools] have built the songs but still allow enormous freedom to everyone. Although these songs have a way and spirit of being played, there’s such an acceptance to allow for a free-for-all that is very liberating as a musician. Watching these guys who have been playing together for decades be able to serve the songs in such a completely wide-open way and surrender to the group has been another major lesson for me. They do this in every aspect — from songwriting, to decision making, to the choosing of a set list. From top to bottom, it really does feel like a democracy. When I first joined, I was brought in to do a record with Widespread Panic and a few shows, but I wasn’t thinking I was going to be there long. So, I was only thinking in terms of being there as support and falling back.

ArtsATL: And now, a few years later, has that changed?

Trucks: Yes — all the people in the group are giving. They’re truly willing to hear everyone out – good or bad. Widespread Panic is just a well-oiled union coming together. When I went into this at 27 years old, I wondered what I really had to offer to the conversation of great musicians who had been at it for decades. But when I would air my opinion, they’d listen and encourage my input. These guys aren’t trying to get on the radio or be the next big hit. Their goal is to be honest with their music, and they received me with open arms.

ArtsATL: What are your thoughts on filling the seat behind the drum kit that previously belonged to Todd Nance?

Trucks: I have nothing but love and respect for Todd — both as a man and a musician for all that he brought to the band and all the songs he contributed to and wrote. I feel that his energy is always present. Todd is a great guy, so I try to hold up to the standards of that spot now. And I can tell you there’s not one moment or one song where he’s not in the back of my head and I’m trying to keep it between the lines. Trucks has gained acceptance as the new drummer for Widespread Panic.

ArtsATL: The past couple of years have brought many changes for you. While you found a permanent home with Widespread Panic, you lost your uncle Butch Trucks, Colonel Bruce Hampton and Gregg Allman. You were close with all these music legends. How has losing them affected your approach to music?

Trucks: With Butch, I knew I kind of naturally sounded like him, and being around him all the time and picking up the way he played drums made me actually try to stay away from the Butch “knock, knock,” especially when he was around. But now that he’s gone, it’s the opposite for me. Butch was such a unique drummer and one of the absolute most power rock ‘n’ roll drummers of all time. So, now, I have no shame in trying to give it my best Butch impression and give it my all. And whenever Jimmy falls into a Dickey thing, I get so excited and think this is my chance — for some musical magic — and I just hit the Butch gas pedal. And Jimmy will look over at me and smile — and I smile back. He’s ripping Dickey, and I’m ripping Butch, and it’s a good thing.

With Gregg, I knew him my whole life. Without Gregg and Duane, I feel my life would be very different. They blazed the trail for the path I’ve chosen. It was so hard to listen to Gregg or Allman Brothers records for a while. But now that I can, I’m overwhelmed by how powerful Gregg’s songwriting was. And right up ‘til the end, Gregg could do no wrong when he opened his mouth. So, again, while Butch and Gregg were alive, I didn’t want to be too excited about them and seem like I was riding on their coattails. But now that they’re gone, I can’t hold that banner up high enough. I’ll hold that banner up as high as I can for these guys that did so much for all of us.

As for the Colonel, being around Colonel was like being part of a secret society with this kinky handshake and all his funny quirks. But the Colonel left a very big impact. Initially after we lost him, I obsessed and listened to recordings over and over — but now I realize I’m just so grateful that I’m 30 years old and got to spend so much time with him. Three-and-a-half years in the van with him was the best/worst thing of my life. [chuckles] But I wouldn’t trade it for the world.

ArtsATL: What was the most valuable lesson Colonel taught you?

Trucks: He taught me to think about the why I want to play music. To reflect on my intention towards playing and to respect it — understand its healing power and the connectivity it provides us to others and to honor that and be grateful. Now that he’s gone, that resonates with me and goes into my process.