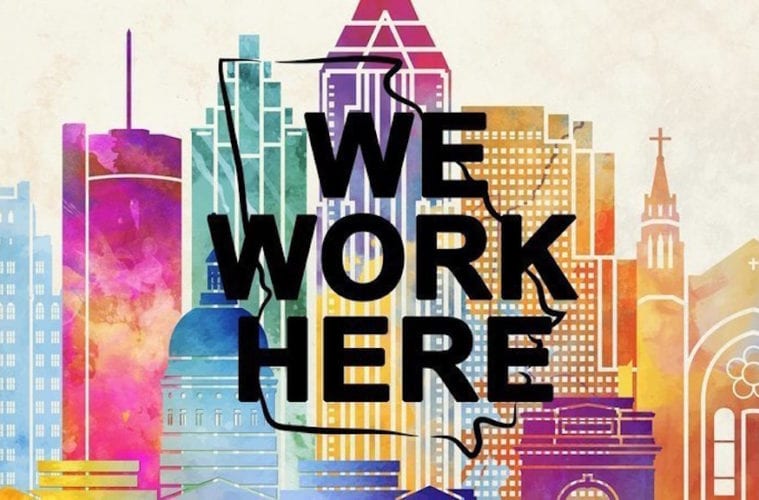 Equally vocal, though, have been Georgia film industry locals and grassroots activists vowing to stay in the state and fight the law and calling for those in Hollywood to stay and join them by supporting local organizations such as ACLU Georgia, who will be challenging the law in court.

Molly Coffee has been deeply embedded in the state’s film industry for a decade. Her company, Zombie Cat Productions, builds puppets, sets and props for the industry, working on shows such as Doom Patrol. Coffee is also the creative director of Film Impact Georgia, a nonprofit organization dedicated to the advancement of the independent filmmakers who live and work in the state. She is also an Atlanta Film Society Filmmaker-in-Residence.

Coffee spoke with ARTS ATL a few days after Kemp’s signing of HB 481 (several days before Alabama would go on to enact an even more punitive version of a Heartbeat Bill) about working in film and how people can support Georgia’s film industry and the women who will be impacted by this law.

ARTS ATL: How have you seen your business change and grow as the film industry in the state has changed and grown?

Coffee: The industry grew so quickly here that there wasn’t a lot of trust in local vendors and local opportunities. We saw so many jobs that were taken by people from North Carolina and Los Angeles and New York that were moving here to work here. We were young and we were inexperienced, and it makes sense that there wouldn’t have been a lot of trust in us. But we’ve slowly proven the opposite of that, and Zombie Cat Productions in particular has been able to get better gigs and higher-profile gigs, and we’ve seen this amazing amount of trust now be given to us as we grow as a vendor for the industry. It’s been really great. We’ve proven through the work that we can do it.

ARTS ATL: In light of that, let’s talk about HB 481, the so-called Heartbeat Bill. When Kemp signed it earlier this month, what were your initial thoughts as both a woman and a woman in film in this state?

Coffee: We’re living in an age in which it’s very easy to get distracted by headlines and talking points that take away from the real issues — calling it a “heartbeat bill” was designed specifically to make the issue solely about how you feel about the death of infants.

As someone who was born and raised in Georgia, I have been very concerned and invested in trying to help work on larger women’s health-care issues in Georgia. We have the highest maternal mortality rate from childbirth in the United States, [one of the] highest in the nation for infant mortality. Sixty-four of our 159 counties don’t have a pediatrician [as of 2018]. People in America aren’t supposed to die during childbirth, and the fact that that is happening in Georgia should be the topic of conversation, and not a bill that was named the Heartbeat Bill for a shock factor.

The Heartbeat Bill addresses one point of view without taking into consideration the larger issues of being a woman in Georgia, and it also just makes it clear that no one trusts women to make decisions about their own body. So, my reaction is anger if nothing else, and the frustration that this is a distraction from a larger issue.

As far as a filmmaker in Georgia, the writing was very much on the wall as far as what this was going to look like as far as people immediately calling for a boycott of Georgia, which is understandable when the only real power anyone feels like they have is with their dollar. So, calling to no longer spend any of your money in Georgia is a very easy way to deal with the situation. And I understand it in a world in which the voter feels disenfranchised and [in which] we feel like we have no voice and no power.

The problem is that it’s an easy reaction that doesn’t take into consideration any of the larger issues. And it abandons the women of Georgia that don’t have the privilege of being able to follow the tax incentive.

ARTS ATL: Right, and what we’re hearing is that that response is also punishing the women that are already being punished by the law in the first place.

Coffee: Exactly. And this really is a larger fight for the United States. People want to focus on what’s happening in Georgia, but there are [at least] 20 abortion cases in the pipeline to the Supreme Court currently, and any one of those could gut Roe vs. Wade. We’re one of many states that have a version of a Heartbeat Bill that has passed or is on the docket to be voted on — that includes a heavy film-incentive state, which is Louisiana.

Eventually, they will run out of states to shoot in, while they should be doubling down on the states that these bills are being introduced in. It only takes one case to set precedent. ARTS ATL: And like you mentioned, a boycott doesn’t seem to be a sustainable response.

Coffee: Exactly, and even though Kemp’s office had come out with a public statement regarding whether they care if the $2.7 billion in direct spending in 2018 by the film industry goes away, [David] Perdue just stated on Fox News that he’s not concerned about the film industry leaving Georgia.

So the one thing that is gained by the film industry leaving is a large majority of the current liberal and Democratic voters in Georgia will leave with it, which gives [Republicans] back the control of the state, despite the fact that [the majority] of Georgians do not support the Heartbeat Bill. We just need those numbers to be expressed in the local elections, which again means doing the work and supporting people like Stacey Abrams and Sarah Riggs Amico.

ARTS ATL: What kind of conversations are you hearing taking place among your fellow Georgia film industry folks in terms of the response to this law?

Coffee: There’s a couple of different conversations that I’d say are happening. One of the exciting things is that women are literally going to the mat fighting. They’re coming out for protests, and they are becoming active. They’re talking about what the next steps in Georgia are. How do we fight this? How do we flip seats? People are energized to make a difference, which is absolutely wonderful.

[Also], there’s a lot of concern within the industry about what the industry is going to look like moving forward, because even though there have been a couple of production companies [that have publicly stated] that they are not going to shoot in Georgia, there are a lot of larger studios that have done lots of work in the state that are currently sitting back waiting to see what happens. So our industry really could go away, and people are really concerned about that. And because we’re in Georgia and the real decisions are being made in California about that, everyone feels helpless and doesn’t know how to fight for the work staying here.

And I know for the state of Georgia itself, the conversation becomes about liberal Hollywood and their influence in our state and how they don’t speak for Georgia, but that’s not necessarily true. We had 300 new businesses expand into Georgia to support the industry. You’re talking about 92,000 jobs that were created. And much like other large industries that come into town, it remains very important to the film industry that they are investing in the local towns and counties that are hosting them.

A perfect example is just the incredible, positive influence that The Walking Dead has had in Senoia, a town that was practically on the cusp of being dead [that] now has burgeoning storefronts. So we do spend the money locally. Every film I’ve ever been on, the conversation is to make sure that 99% of the receipts that I turn in are all local Georgia purchases.

ARTS ATL: As a female filmmaker working in this state, what do you think is a better way than a boycott to fight HB 481?

Coffee: Well, we’ve seen it — the most publicized one recently has been Jordan Peele and J.J. Abrams donating their profits to ACLU Georgia and Fair Fight Action for the production they have coming up, Lovecraft Country. Things like that are very positive.

I think one of the big things is that [what] we need to do is keep giving voice to the women in Georgia. I know a lot of publications are focusing on what Hollywood has to say, but we really should be spending more time talking to the women who live in Georgia about what they need.

[And a boycott] just focuses on privilege. It is very easy to look at the people who have moved from state to state to follow incentive and say they should just follow the incentive to the next state and leave Georgia. But that is not the reality of what it is like to be a woman living in Georgia.

We will be leaving people who will no longer have health care, no longer be able to pay the mortgages on their houses — because they’ve been able to make more money thanks to the film industry than they’ve ever made. And that comes from a place of privilege, the idea of being able to just leave the state.

And you’re punishing the women that have been here protesting for the past two months at the Capitol building and did go door-to-door promoting Stacey Abrams last year, the ones moving forward who will be active flipping seats in the state of Georgia. You’re choosing the wrong person to punish.

ARTS ATL: What do you want people outside of this state, or the South, to know about the women living and working here, the ones doing the work on the ground of combating laws like this?

Coffee: That there’s lots of ways to support them — via No Safe Seats or ACLU Georgia or the Feminist Women’s Health Center or Planned Parenthood Southeast. There are lots of organizations that are here.

We also need to give voice to the fact that already the number of women that are going in for health care in Georgia has been reduced because people already don’t understand the complexities of the law and don’t understand this doesn’t go into effect until January of 2020. We’re already seeing women’s health be damaged by this bill and damaged by the wrong focus that’s been made by the media.

Just listen to us. Give us a voice. Help support us as we fight this. Because this isn’t just our fight.

ARTS ATL: You recently put together a We Work Here petition. Can you tell us a bit about that? What do you hope it accomplishes?

Coffee: Sure. There were a lot of us that got together that really wanted to make sure we were affecting the narrative about all of this in the way that we wanted to and to essentially have a call to arms.

The petition itself is a voice to those calling for a boycott to not punish [women] with a loss of income and resources and to listen to what we need and what we have to [say]. To let them know that we are not quitters and [that] what we need most are allies.

Note: This interview has been edited and condensed for clarity and accuracy.