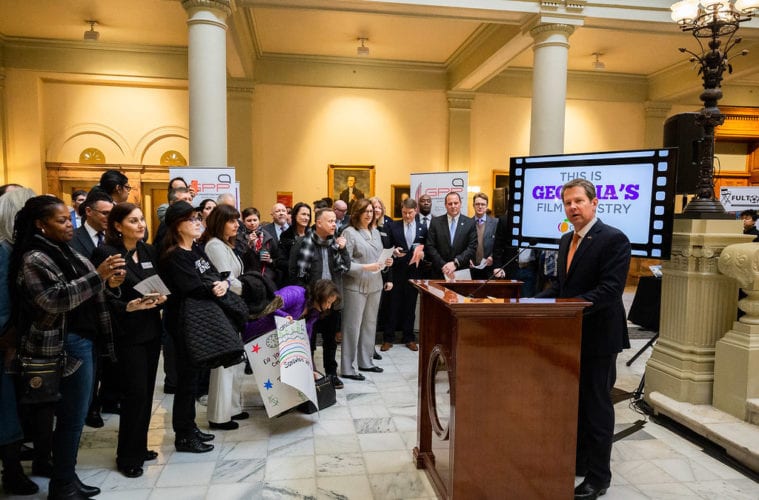 Back in March, roughly 10 days before HB 481 passed the House and was sent to his desk, Governor Brian Kemp spoke about his continued commitment to Georgia Film at the state capitol. (Photo courtesy of Brian Kemp/Office of the Governor)

On Wednesday, Disney CEO Bob Iger told Reuters that it would be “very difficult” to continue filming in the state if HB 481 goes into effect in January 2020. Disney is the production studio behind Georgia-filmed mega-hits Black Panther and Avengers: Endgame. In his statement, Iger also said, “I think many people who work for us will not want to work there, and we will have to heed their wishes in that regard. Right now we are watching it very carefully.”

Other studios have also spoken out, according to The Hollywood Reporter. WarnerMedia, which is currently shooting The Conjuring 3 here and is slated to film the upcoming Suicide Squad sequel in the state, said it is monitoring the situation closely and that “if the new law holds, [it] will reconsider Georgia as the home to any new productions.” NBCUniversal, CBS, Viacom and Sony all came out with similar statements.

AMC, the network home of Georgia’s The Walking Dead series, also weighed in, stating that “if this highly restrictive legislation goes into effect, we will reevaluate our activity in Georgia.”

For now, these companies are content to watch how the battle over the law plays out in court. Meanwhile, Stacey Abrams, who’s long championed the men and women working in the state’s film industry and is against a boycott of the state, tweeted on Wednesday, “Georgia stands to lose Netflix & Disney. This means lost jobs for carpenters, hair dressers, food workers & 100s of small businesses grown right here. Billions in economic investment headed to states eager to welcome film + protect women. #Consequences.”

Update, Wednesday, May 29: Netflix is now the first major production studio to take a stance on Georgia’s six-week abortion ban, slated to go into effect January 2020.

The monolith responsible for such Georgia-filmed juggernauts as Ozark and Stranger Things announced yesterday via a statement to Variety by chief content officer Ted Sarandos that if the law isn’t overturned in court, Netflix would “rethink [its] entire investment in Georgia.” Sarandos’ statement also said, “We have many women working on productions in Georgia, whose rights, along with millions of others, will be severely restricted by this law. It’s why we will work with the ACLU and others to fight it in court. Given the legislation has not yet been implemented, we’ll continue to film there — while also supporting partners and artists who choose not to.”

Similar to the tack taken by J.J. Abrams and Jordan Peele, Ron Howard, director of the upcoming Netflix series Hillbilly Elegy, said that he’d be keeping his production here in the state while donating to the ACLU. Howard stated that if HB 481 goes into effect, he would not come back to the state to film future projects.

Meanwhile, many Georgia activists and film industry locals continue to speak out against such boycotts, saying they harm the women living and working in this state who are already made vulnerable by the law.

Update, Thursday, May 23: Two showrunners have announced this week that they will be pulling their productions from the state in response to HB 481.

Reed Morano, director of an upcoming Amazon series by Sister Pictures called The Power based on a book by Naomi Alderman, was scheduled to head to Georgia this week to scout shooting locations for the new show. She canceled the trip, and any plans to shoot the show here, due to HB 481.

In an article for Time magazine, Morano said, “We had no problem stopping the entire process instantly. There is no way we would ever bring our money to that state by shooting there.” In a post on her Instagram account, she also wrote, “It felt wrong to us to go ahead and make our show and take money/tax credit from a state that is taking this stance on the abortion issue. We just couldn’t do it.”

Morano did acknowledge Georgia residents who work in film in the Time article, noting that the potential impact on their livelihood was “the hardest part” of deciding to boycott. Though she also said that while they are “an excellent group of people on the ground that deserve to work,” “having this basic fundamental right for women is more important than anything in this moment in time.”

It’s been reported that showrunners for Kristen Wiig’s new Lionsgate comedy, Barb and Star Go to Vista Del Mar, also opted this week to pull production from Georgia in response to Kemp’s signing of the antichoice bill. Wiig and Lionsgate have yet to comment on the decision.

Update, Tuesday, May 14: A spokesperson for Kemp has announced that he will be postponing a May 22 trip to Los Angeles for the “Georgia Night in L.A.” event intended to promote the state’s film industry — presumably due to vocal local and national backlash following his signing of HB 481. As of this update, five production companies have boycotted filming in Georgia in protest of the bill: David Simon’s Blown Deadline Productions, Killer Films, Nina Jacobson’s Color Force (behind productions such as Crazy Rich Asians and American Crime Story), Duplass Brothers Productions and CounterNarrative Films.

The Atlanta Journal-Constitution has reported that the trip has been rescheduled for the fall. In the interim, it reports, Kemp will be visiting production studios throughout the state to meet with executives and express his support for Georgia film.

Update, Saturday, May 11: Jordan Peele and J.J. Abrams announced via statement Friday afternoon that while they would still continue to shoot their upcoming HBO series Lovecraft Country in Georgia, they would be donating 100 percent of their episodic fees to Stacey Abrams and groups working to fight the constitutionality of Georgia’s antichoice “Heartbeat Bill.”

“In a few weeks we start shooting our new show, Lovecraft Country and will do so standing shoulder to shoulder with the women of Georgia. Governor Kemp’s ‘Fetal Heartbeat’ Abortion Law is an unconstitutional effort to further restrict women and their health providers from making private medical decisions on their terms. Make no mistake, this is an attack aimed squarely and purposely at women. We stand with Stacey Abrams and the hardworking people of Georgia, and will donate 100% of our respective episodic fees for this season to two organizations leading the charge against this draconian law: the ACLU of Georgia and Fair Fight Georgia. We encourage those who are able to funnel any and all resources to these organizations.”

Peele and Abrams are the first big names in Hollywood to take this tack — throwing their weight behind organizations working to repeal the law rather than leaving the state. It’s one that seems to be more encouraged by Georgia residents who would potentially be affected by this law, and those locals working on the state’s film and TV crews.

Original post: On Tuesday, Governor Brian Kemp signed the antiabortion legislation nicknamed the “Heartbeat Bill,” into law. Georgia’s HB 481 is now one of the most restrictive abortion laws in the country, criminalizing the procedure at six weeks in all but the most extreme circumstances, long before many women even know they’re pregnant. The law is scheduled to go into effect January 2020, but will face court challenges.

When proposed several months ago, HB 481, sparked outrage and protest across the state and country, and some of the most vocal opponents were members of the film industry, both inside and outside of Georgia. Actress Alyssa Milano took to Twitter to encourage Hollywood to pull its productions from the state, drafting a letter to Kemp and House Speaker David Ralston signed by major Hollywood actors, stating that they would work to take future productions elsewhere if the bill was signed into law.

The Writers Guild of America, a national screenwriter’s union, followed suit, penning a letter stating that HB 481 was a “draconian anti-choice measure” and that it would be “entirely possible that many of those in our industry will want to leave the state or decide not to bring productions there” should Kemp codify the Heartbeat Bill into law.

At the time, Kemp showed a clear disregard for the threats, stating, “I can’t govern because I’m worried about what someone in Hollywood thinks about me,” though some are now wondering if his tune will change as Georgia and the national film industries begin to respond.

On May 8, David Simon, creator of The Wire and The Deuce and head of Blown Deadline Productions, tweeted, “I can’t ask any female member of any film production with which I am involved to so marginalize themselves or compromise their inalienable authority over their own bodies. I must undertake production where the rights of all citizens remain intact. Other filmmakers will see this.” Christine Vachon, CEO of Killer Films, the independent production company behind Carol and Colette, followed suit, announcing via Twitter that her company would also cease to consider Georgia as a filming location until HB 481 was repealed. While Mark Duplass of Duplass Brothers Productions and Neal Dodson of CounterNarrative Films also announced on the social media platform that their companies would not be giving their business to the state in protest of the antichoice law, heavy hitters in the state’s film industry, including Marvel and Netflix, have yet to respond — though many on social media are calling on them to do so. Reproductive justice groups such as Lady Parts Justice League and UltraViolet addressed Netflix directly, demanding it stop filming here until the law is overturned. Back in April, UltraViolet flew a plane outfitted with a banner that read “NETFLIX: PROTECT WOMEN. STOP FILMING IN GEORGIA” over Netflix headquarters in California. Georgia residents have been less inclined to support such an outright ban on the state, which would threaten the livelihoods of the thousands of people the state’s film industry employs. Instead, they’re asking the industry to throw some of its economic power behind politicians, policies and organizations that support women’s reproductive rights.

State senator Jen Jordan has also tweeted a request for the film industry to stay, vowing that the “women running for and winning elected office” will help stop the bill in court. The American Civil Liberties Union has also vowed to challenge the bill’s constitutionality.

Back in March, Kemp spoke at the state capitol for Georgia Film Day, announcing his continued dedication to the industry responsible for a $9 billion boost to the state’s economy in FY 2017–18.