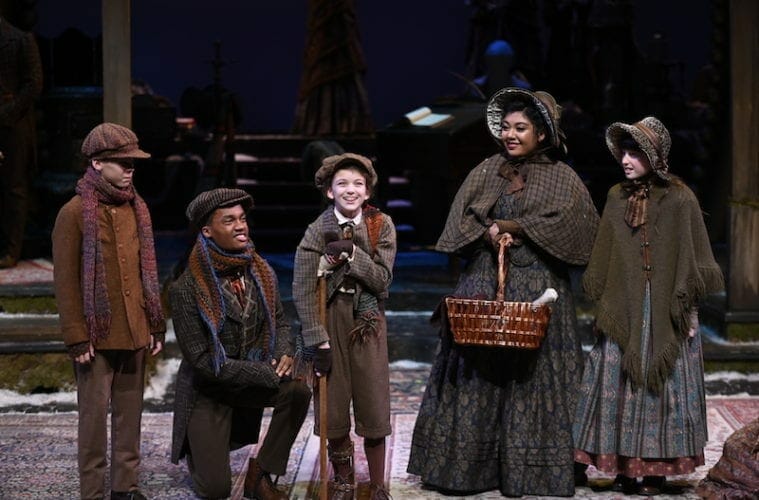 Karah Adams (center, with other members of the 2019 Cratchit family) is the first female Tiny Tim at the Alliance Theatre in 11 years. Also pictured (from left): Grant Martin, George Roberts, Shelli Delgado and Bella Fraker. (Photo by Greg Mooney)

“When Karah walked into the audition room, she immediately struck me as special,” says Newcott. “I am always looking for a quality when searching for Tiny Tim, in addition to the fact that Tim should sing well, move well and handle a British accent. Karah ticked all the technical boxes, and then there is a quality of inner joy about her that she brings to every moment onstage (and off). She is also absolutely professional.” She isn’t the first female Tiny Tim at the Alliance, but she’s the first in 11 seasons.

Offstage, Adams — whose honeyed accent is unmistakably Southern — exudes a pixie-like charm and exquisite manners. Her self-confidence and maturity belie her age (she just turned 12). And when it comes to cross-gender acting, this isn’t her first rodeo.

Theatre Buford cast Adams as Tiny Tim when it did A Christmas Carol last year. In June, she was in Atlanta Lyric Theatre’s Oliver. And she was recently named an ALL-STAR in Atlanta’s Junior Theatre Festival for her work as Junie B. Jones — her favorite girl role — in the Play On Players staging of Junie B. Jones Jr. “I feel like I’m flying,” the home-schooled Adams says about performing live. She’s a self-proclaimed night owl who likes staying up late for Alliance rehearsals (12:30–10 p.m. six days a week).

During a recent dinner/nap break, the youngest of five children discussed her observations on boys’ body language, what she learns from the other actors and what she wants for Christmas.

ArtsATL: Did you know you were auditioning for Tiny Tim, or did you assume you’d be trying out for a girl’s role?

Karah Adams: I didn’t know that they were going to have me audition for Tiny Tim. After my audition for a girl’s part, they gave me a sheet of paper [with Tiny Tim’s lines] and asked me to read. I did it, they thanked me and that was it. But I was so stoked later when I found out I got the role.

ArtsATL: Once you realized you’d be playing Tim, did you find yourself watching boys to see how they might move or act differently from girls?

Adams: I’ve observed how boys walk slower than girls, how their legs are more open when they sit down and how they lean waaaay back when they sit. I played Tiny Tim for the first time last year, and I played Toto in The Wizard of Oz too. That wasn’t a speaking role, but I had to bark like a boy dog [laughs]. It’ll be cool playing a boy again because it’s always cool playing someone you aren’t. When Karah Adams isn’t onstage (here with Daniel Thomas May, left, and Neal A. Ghant), she likes playing with her cousins and playing the ukulele. (Photo by Greg Mooney)

ArtsATL: Your role requires singing. Did you take singing lessons to prepare?

Adams: No, but I was surrounded by music my whole life — it just came with the family. My  grandfather [David Young] is a member of the Atlanta Country Music Hall of Fame. My mom traveled in music evangelism her entire life with her family. My dad started writing songs in college and is a phenomenal piano player. And my parents met at the music school where my grandparents have served for 35 years. When we started rehearsals, Miss Rosemary had to figure out a key in the song “Away in a Manger” where I could sound like a boy.

ArtsATL: What are your hobbies?

Adams: I love playing with my cousins . . .  and I have lots of cousins. I also like playing the ukulele with my brother, Ian, and sisters Kenadi, Kena and Kayna. Last year, my brother got into drums, and my sister wanted to play electric guitar. So we went to an instrument store where me and my sisters picked up ukuleles and started playing and harmonizing a Christmas carol. A small group of people from the store started listening to us. My parents got us all ukuleles for Christmas.

ArtsATL: What’s your favorite scene in A Christmas Carol?

Adams: One part that’s really fun is the Cratchit scene with all the family because everyone’s there, we’re having a fun time and we sing together.

ArtsATL: What have you learned about acting during rehearsals?

Adams: I like sitting in the audience during tech week, when I can, and watching the other actors. I noticed how [David de Vries, who plays Ebenezer Scrooge] knew his lines — how he was going to act and talk — way before we started rehearsals. And there’s a scene during Fred’s party where six people are on the stage having a lot of fun. Even though they’re going to be doing this section in the show over and over again, you can just tell that every time they do it, they have more and more fun. [I learned] actors can’t sleepwalk through a scene no matter how many times you have to repeat anything onstage. ArtsATL: How hard is it saying goodbye to a cast and crew after going through auditions, rehearsals and performances together? Or does it feel like you get to leave with a wonderful gift and wonderful memories?

Adams: It’s kind of both. It’s sad that you’re leaving them, but you know you might have the chance to see them again in another show. Or you can meet up with them some days. You’re sad to leave them — but you’re like, “This was such a great cast, and I would love to be with them again.”

ArtsATL: Do you want to continue acting professionally when you grow up?

Adams: Yes, I think it would be really fun to do more stuff in the future. And, one day, I would love to act on Broadway, like David.

ArtsATL: What do you want for Christmas?

Adams: I already have a dog, but I would love my own dog. I realize it’s kind of a lot to handle for this age and being in theater, but I just love dogs. I would love to have a Maltese because I could easily pick up and hold a small dog. Another thing I would love would be a lot of beanie toboggan hats that go over your ears because it’s already getting cold.