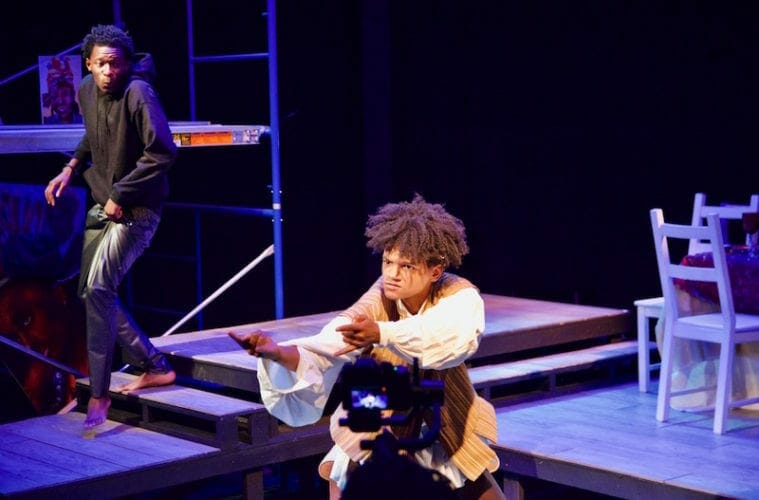 Tiny Theatre recently did "Hamlet" under the tent at the Alliance Theatre. (Photos courtesy of Tiny Theater)

Q&A: Tiny Theater’s Cyd Prather sees in herself the next Tyler Perry

When Cydnei Prather was a SCAD theater major it didn’t take her long to notice how few substantive roles for Black students there were. She recalls being the only Black actor in a production her freshman year. The director asked her to play her character in a more stereotypically “Black way.” She knew that wasn’t true to who she is, so she put her energy into self-producing shows with friends. Prather also formed a traveling improv duo with her best friend — called Bree and Cyd — and in the spirit of the Comedy Central sitcom Broad City.

After graduating, Prather put her entrepreneurial spirit into creating The Tiny Theater Company. For three years now, she’s been producing abridged versions of Shakespeare classics while blending in modern language and African American culture. When she’s not at The Tiny Theater, she teaches theater at Drew Charter School in southeast Atlanta.

When ArtsATL spoke with Prather, she was in rehearsals with middle- and high-school students for Stephen Sondheim’s Into the Woods. Hours later Tiny Theater’s Hamlet was featured under the tent at the Alliance Theatre. A film version can be accessed from Tiny Theater’s website.

Tiny Theater planned to “Othello” in August on the Alliance Theatre, but that project is on hold.  Adapter/director Cyd Prather will set it in an HBCU frat house.

Tiny Theater has also done a Romeo & Juliet inspired by the movie Love & Basketball and planned to do Othello in August at the Alliance Theatre, a collaboration that’s now on hold. Prather, who will adapt and direct it, says she’s setting it in a HBCU frat house and centering it around Iago. “It’s going to be fun.”

She’s also determined to continue making pathways for young Black and Brown people to see themselves in the classics.

ArtsATL: How did you get into theater?

Prather: When I was around 10, my cousins were taking an acting class and I decided to take it with them. We were reciting Maya Angelou poetry and things like that. Once I started, I never stopped. I took classes and joined drama club in school. Even before then, I would direct my cousins in shows. We played dress up, and I was always the director. 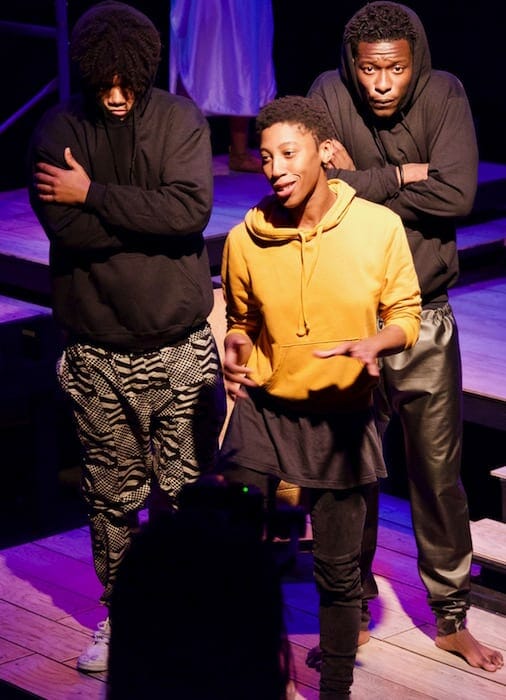 Cyd Prather (center) founded Tiny Theater to act, direct, produce and to give Black and Brown artists a place to see themselves.

ArtsATL: What made you want to start The Tiny Theater?

Prather: When I graduated from college, I wanted to act, produce and direct, but I noticed that there were limited opportunities for people who look like me. I also noticed it was very cliquish, and I’ve never been one for rules and people telling me when I can or can’t do stuff. I wanted to see all Black people doing something that wasn’t A Raisin in the Sun or The Color Purple. I was living at home, so I saved any money I made to rent my first space in Metropolitan Studios. It was the size of a closet and I put a stage in it. That’s why it’s called The Tiny Theater.

Prather: I love Shakespeare because it’s so dramatic, and it was free to adapt. When I read Shakespeare, I hear it in my native tongue. A lot of the time when I see Shakespeare, it just feels like people yapping, it’s not the way I see it in my brain. I wanted to breathe new life in it and see it how I saw it in my brain.

When I heard the line “Hail to your, lordship” in Hamlet, I saw two Black bros coming in to check on each other. Those are the voices I’m around. When I hear Gertrude’s monologue, I hear a strong Black woman. Because of the way I was raised, everything was Black. We weren’t allowed to have White Barbies or be exposed to certain things, and in hindsight it was to keep us safe and uplifted.

ArtsATL: How is your Hamlet or Romeo & Juliet different?

Prather: It’s the tone, it’s the energy. Our language flows differently. Our voices have a different bounce. When we laugh the room looks. When we dance, the room goes “How’d they do that?” The costumes are a mixture of period, Afrocentric and contemporary fabrics. And we infuse laughter because as Black people we make light of dark situations in order to survive. My study is improv, so there’s always comedy.

ArtsATL: How are you funded?

Prather: Everything comes out of my pocket. I pay actors from box-office sales. My mom does costumes. Ideally, I’ll have a company that I can pay every two weeks. 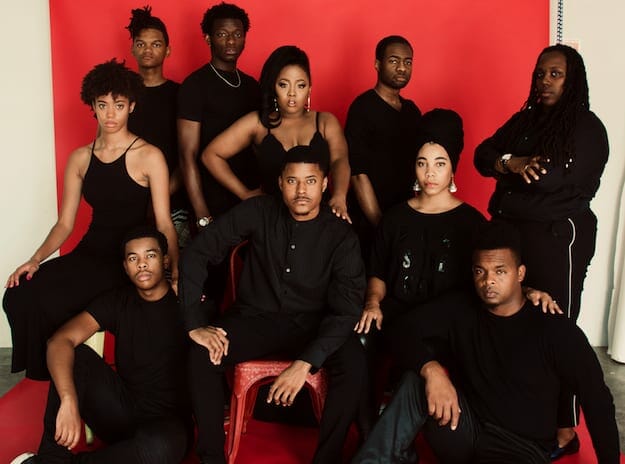 The cast of Tiny Theater’s “Hamlet” film, available via the company’s website.

ArtsATL: How long do you think this model is sustainable?

Prather: I don’t know how long I can keep sustaining this alone with no financial support. I will keep going until I don’t want to anymore. I have dreams for it, but I also understand I can only do so much without support, especially since I can see the support White theaters get so quickly and effortlessly. So, yeah. I don’t know. Sometimes it doesn’t feel good so I don’t know how long I’ll keep serving the community this way.

ArtsATL: Where do you see yourself in five years?

Prather: I want to be the next Tyler Perry. I want TV, film and theater in a new way. I want to bring back the live studio audience. Tyler Perry owns neighborhoods, and just to be able to say that I own neighborhoods that we can use for sets, or for the homeless to have a reach. I want Black people to know that they have an artistic home.