Bestselling crime author Karin Slaughter will be in conversation with fellow author Alafair Burke on May 21 at Holy Trinity Parish. (Photo by Marc Brester)

To bestselling Georgia author Karin Slaughter, all of our very best stories have crimes as their catalysts — crimes we perpetrate against others, and those perpetrated against us. The way Slaughter sees it, they’re what propel most stories forward, spur characters to action, reshape the landscapes of the places we think we know.

This is certainly true of her own body of work, which includes 18 novels in the Grant County and Will Trent series, stand-alone works such as Cop Town and the New York Times bestselling novels The Good Daughter and Pretty Girls. Her work has been translated into 37 languages, selling over 35 million copies globally. The Good Daughter, Cop Town and Pieces of Her are all being adapted for the screen.

In advance of her author event at Holy Trinity Parish with fellow author Alafair Burke on May 21, Slaughter chatted with ARTS ATL about writing complex female characters and the cathartic nature of crime fiction. She also let us in on a few details about the upcoming Netflix adaptation of her book Pieces of Her.

ARTS ATL: How did your career as a writer begin?

Karin Slaughter: It took about 10 years to get an agent, and during that time, I was doing a lot of different jobs. I was an exterminator. I worked in a sign shop. I painted houses. I went to Georgia State, and then I dropped out. Essentially, I got an agent, and that took about 10 years of me working and writing different stories, and trying to — not to sound too arty farty — to find my voice.

ARTS ATL: What was it about the thriller/true crime genre that tugged on you as a storyteller?

Slaughter: Being from the South, I thought I had to write Gone With the Wind part two, and there’s a reason why that’s not ever really been successfully done. And honestly, the books I loved to read were all thrillers. I was an English major, and I had a chip on my shoulder about thrillers — that somehow they weren’t as important as other types of writing.

What I realized was if you look at the history of the American canon, you’d be hard-pressed to name a book that’s really endured in the psyche of Americans that doesn’t have some sort of crime at the center of it. Even Scarlett O’Hara killed a Yankee in cold blood. It kind of gave me permission to write the book that I really wanted to write, which was something about a small town in South Georgia very similar to where I grew up.

When I was a kid, my step-aunt was the chief of detectives in Forest Park. And I saw, through her eyes, what that job was like — especially for a woman, how difficult it was, just the brutal sexism that she had to put up with to do her job. It was a hard enough job already. But on top of that, to not have that 100 percent support she would’ve gotten if she was a man, that was really eye-opening to me.

ARTS ATL: Gillian Flynn [author of Gone Girl and Sharp Objects] has commented on the change that’s finally happening in books and in the wider popular culture where we’re seeing female characters written as the complex, three-dimensional people they are. But your books have always been full of female characters like that . . .

Slaughter: Gillian and I — she started a little later than me — but we’ve always written those types of women. Even in her earlier books, she was talking about women who were really complicated. For a long time, I think, particularly for women writing crime fiction, there was this desire to make the women perfect. They knew how to cook, and every man wanted them, and they were sort of like a counterbalance to what men were writing about male detectives.

So Gillian, Mo Hayder, Lisa Gardner — we just wanted to write about women as more complicated than that. We wanted to find our own voice and tell our own stories.

That was certainly my impetus for writing my first novel, Blindsighted. I wanted to write about complicated women, accomplished women like the ones I saw in my life. I wanted to be as realistic as possible — whether I was writing about characters or relationships or writing about violence.

ARTS ATL: Why do you think it’s important to draw women that way?

Slaughter: I think one of the most important things is just because it’s so rare — not as rare now — but it’s rare to see women [in books, film] who are strong, interesting women who aren’t there in service to men. They stand on their own. They have their own interesting story.

That’s part of my desire to write realistically. When Sara [Linton of the Grant County books] and Faith [Mitchell of the Will Trent books] get together, or when Sara and her sister get together, they’re not going to talk about doing their nails and shopping. They’re going to say things like, “Oh my God, my period’s horrible,” or “I had a shitty day at work.” It’s going more than just what their love life is. 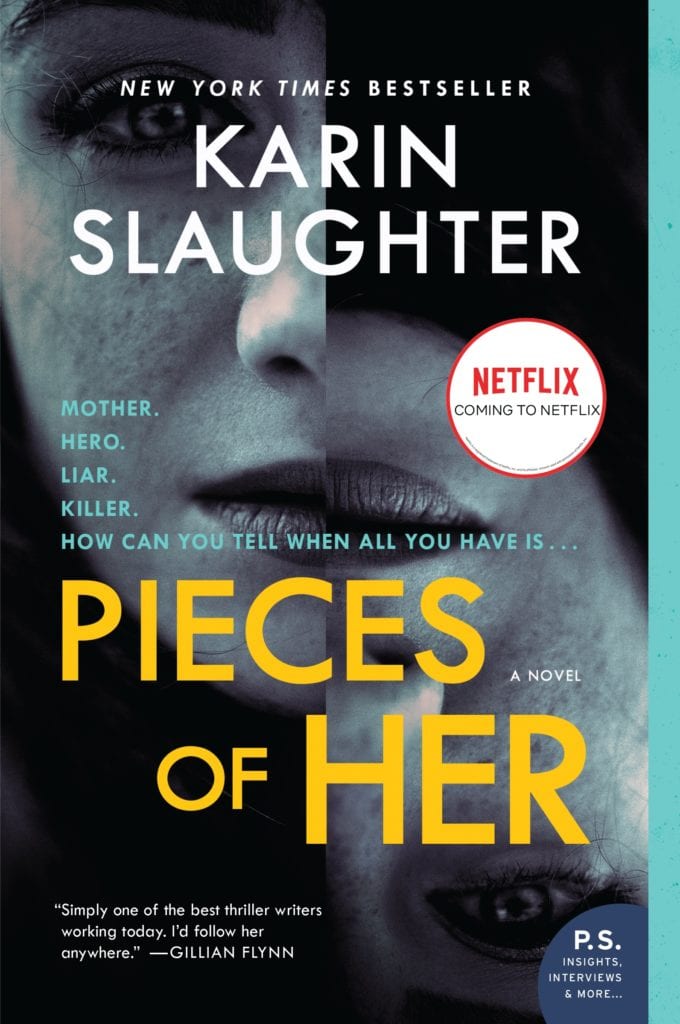 ARTS ATL: Let’s talk about Georgia a bit. You’re from here, and all your books are set here. It’s almost like Georgia and Atlanta are their own characters in your books. Can you talk a bit about how this place has informed your storytelling?

Slaughter: I do actually think of them as characters in the book. In any good book, setting is a character. For me, especially writing crime, to have a place feel very normal and everyday and similar to your own life, and then have something horrible happen — that’s more shocking.

I spend an awful lot of time talking about the place that these crimes are set in, whether its Dunwoody in Pretty Girls or Grant County, which is fictional, but anybody in Georgia kind of recognizes the area. Even Atlanta — the thing about Atlanta is that it’s so many different things to different people. I can only write about my Atlanta and my view on the city.

Even when I’m writing about Atlanta, I’m writing about a small town. If I say somebody lives in Buckhead, there’s a certain personality. I thought when I left Grant County and started writing Atlanta stories that the tone of the setting would be different, but really it’s still that same small community no matter where you go.

ARTS ATL: In your upcoming book, The Last Widow, we’re back with Will Trent and Sara Linton, and we’re dealing with this very plausible scenario of someone targeting the Centers for Disease Control [and Prevention] and Emory. How’d this story come to be?

Slaughter: I’ve always wanted to write a book set at the CDC or something to do with the CDC because I just think it’s fascinating. There’s a lot of assumptions about what they do. They do so much for the country and for the world. They really are the first line of defense against biological attack, or are for the most part. One of the things I love to do with my books is kind of go behind the scenes, show people behind-the-scenes stuff, so this was an opportunity to do that. And Emory is iconic for Atlanta; the campus is really intertwined with Atlanta’s history.

And you’re right, this sort of attack is something that could very easily happen. One of the things I always worry about — the fact is you just can’t say to yourself anymore, “What am I going to do if this thing I’m writing about happens?” The fact is it is gonna happen. It’s just the nature of our world right now. These are things we see on the news.

I want to write books that are entertaining and interesting and do what crime fiction should do, which is hold a mirror up to society.

ARTS ATL: Right, and is writing about crime and violence perhaps your way of controlling any fear you might personally have of these things happening in the world?

Slaughter: I do think it’s cathartic in a lot of ways for women who write crime fiction — especially about violence against women. We get something in these books that seldom happens. The bad guy’s punished. There’s a sense that good has defeated bad. That’s one of the things that I think draws a lot of people to crime fiction. No matter what their political standing is or religion or whatever, we all want that sense that justice is done. That’s a universal thing. And that’s one thing I get to do in my books that’s very cathartic that doesn’t necessarily happen in real life.

ARTS ATL: Pieces of Her was recently optioned for television by Netflix. What can you tell us about where the series is in that process?

Slaughter: They’re writing the scripts now. We hope that it’s going to be filmed in the fall. I was hoping it would be filmed in Georgia, but because of this “Heartbeat Bill,” a lot of Hollywood people are pulling out. I was actually in Los Angeles a few weeks ago, and they said, “If this is signed, this show, this show, this show is going to leave Georgia.” Because people just don’t want to be associated with that. It probably definitely would’ve been filmed here if not for that bill, which is really, as a Georgian, irritating because I want it filmed in Georgia. I’m a Georgian, and I write about Georgia.

They haven’t cast anyone yet, so we’re waiting to hear on that, but I’m super pleased with the script so far — I think they’re doing an amazing job. I’m really excited about seeing what happens.

ARTS ATL: I’d read that for years, offers for adaptations of your work didn’t come because your stories were too female-centric to be adapted for the screen.

ARTS ATL: And now three of your books have been optioned for TV or film. Has that changed the way you write stories at all?

Slaughter: Not at all, and it can’t really. Because at the end of the day, I write books. I don’t want to write scripts. It’s so flattering that people want to adapt them, but my readers got me here. I want to keep giving them the stories that I’m excited about, that I want to tell.

I never would have brought Sara into Will Trent’s world, because you couldn’t option Grant County without also optioning Will Trent. It was really not the smartest way to do it if I was thinking about Hollywood, but I wasn’t. I was thinking, “What’s the best story I could tell my readers?”