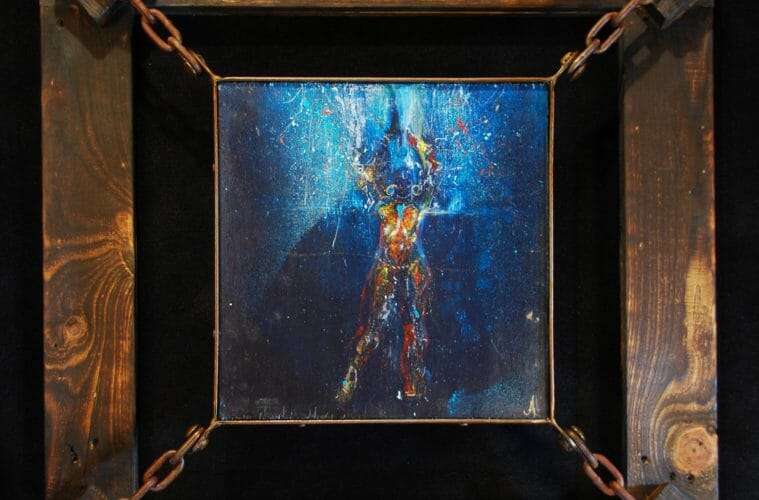 Q&A: “Literally, my tears are in some of these pieces,” says artist André Henderson

Millions of nameless, enslaved Africans who perished at sea while being transported to the Americas are not forgotten. Lives were lost, but soul and spirit are eternal. The Journey by Atlanta-based artist André Henderson features upwards of 30 artworks on view now through August 25 at the P2 Gallery at Parlor, 249-A Peters Street SW, in Atlanta’s Castleberry Hill neighborhood. Some of the pieces displayed are collaborations with Marietta-based wood artist Doug Pisik.

An ageless creative, Henderson’s ingenuity is a force of exploration, history, research and a willingness to be still and attuned to his ancestors. “It’s been stop and go, for a little over a decade, painting this series,” Henderson said, “Literally, my tears are in some of these pieces because they were moving me in such a way, unlike anything else I’ve ever painted in my life.”

Born in New York City’s South Bronx and raised in Brooklyn’s Bedford-Stuyvesant neighborhood, Henderson’s creative curiosity flourished — from crayons and pencils to the sciences, graphic design and paint strokes. No wonder he received the moniker “Renaissance man” by an elementary school teacher. His mother instilled in him the value of great conversation and that school was first and foremost. Although he and his three siblings received toys for Christmas, there were more books, art supplies, coloring books and drawing pads. And lots of pets, from goldfish to snakes. Henderson mentioned that as a youth his room was pretty much a lab and an art studio simultaneously.

Surrounded by a family of creatives engaged in great conversations and academia, Henderson’s personal journey progresses through fine art, film production and interior design. Henderson spoke with ArtsATL about The Journey, intuitive voices and legacy. 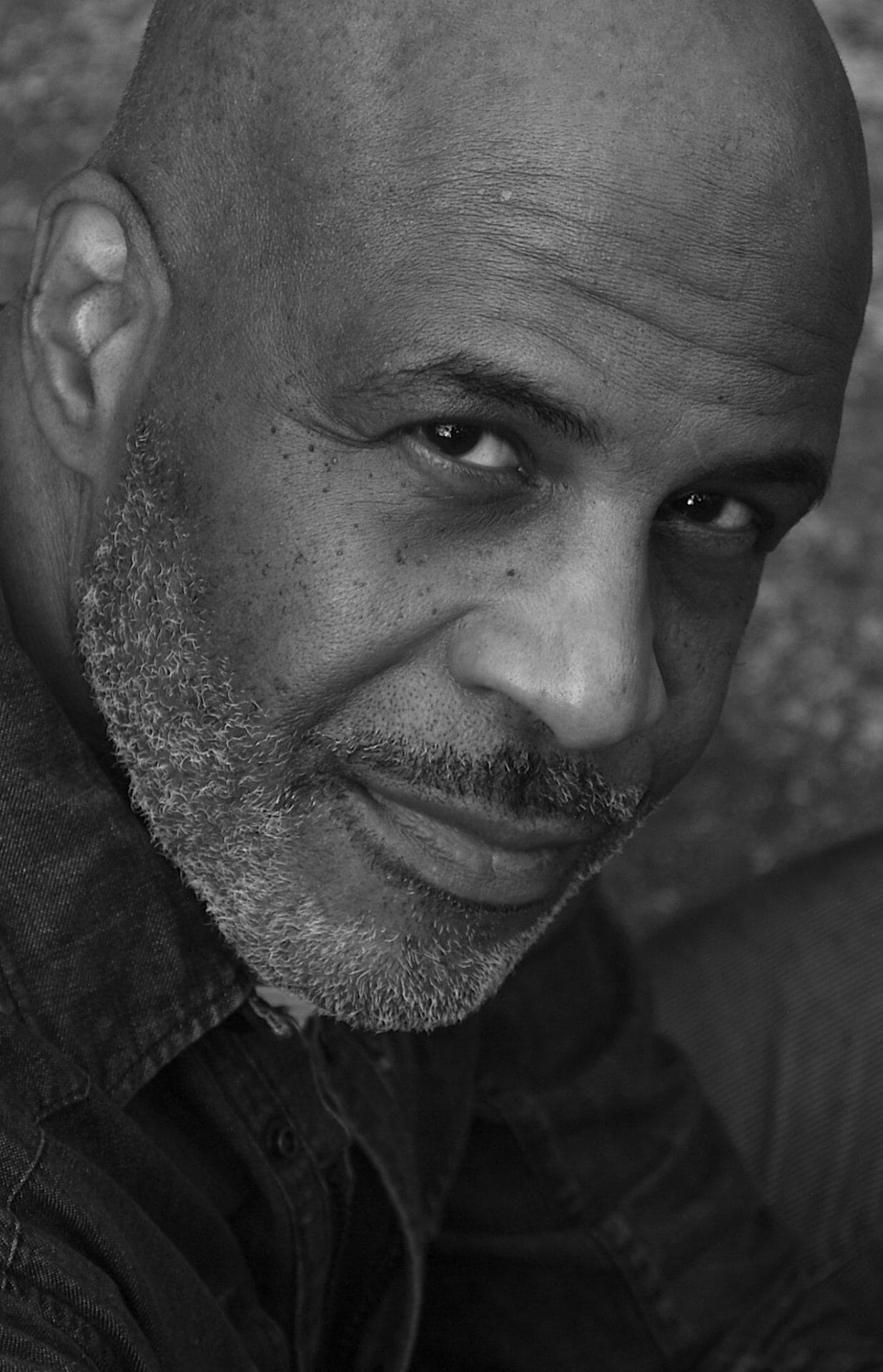 Atlanta-based artist Henderson worked intuitively for 10 years on “The Journey.”

ArtsATL: How did you embody your current show, The Journey?

Henderson: I don’t start out with pictures. I don’t start out with a scene. I don’t do a lot of sketching prior. I paint intuitively. I call it intuitive voices. Sometimes I’ll just literally meditate or wait for that to move me. But something said to me, “paint something for us,” and I said, “who are you?” And the intuitive creative voice said, “we’re the ones who’ve come before you; we’re the reason why you are here.” And I’m like, how am I going to paint that? I registered in my mind that it was my ancestors speaking and holding me up, supporting me. From that point on, 10 years or so through jobs here and there, doing my thing, I would paint as much as I could.

ArtsATL: What were some of the turning points of The Journey?

Henderson: At the time I worked in Buckhead and lived in Castleberry Hill. Sometimes I’d leave work, not taking a lunch break, and drive home just to get in 10 or 15 minutes of painting. I’d go back, do my job, then come home and paint again. There were some really powerful, magical moments. I’ve never been driven or focused or possessed in a way to paint so much and so often about this. But it also led me to go back to my collegiate research and look at African American history and more importantly, be engaged with what happened during the slaving voyages to all of the Africans that perished because those voices were saying, “No one knows about us. We were at the bottom of the sea. We have no names. We have no country. We were Kings and Queens and warriors.” So those were the driving forces and I came to paint “The Journey.”

ArtsATL: What’s the premise of “The Flagship Project,” one of the works in the show?

Henderson: When I paint it’s a stop and go process. It’s when the ancestors speak. Over 35 years ago, I was at the funeral of my great, grand-cousin Vincent Dyer. His widow, Julia, had given me the flag that had been draped over his casket, maybe because I was one of the youngest in the family at the time, but I wondered why it was given to me. I kept that flag folded in its original box and it went with me everywhere I’ve lived. A few years ago, the intuitive creative voice told me to go get the flag. I unraveled it and put it on the floor. I had never been so close to an American flag. It’s 11 and a half feet by 13 feet. I felt such angst towards it. I didn’t feel proud, yet I didn’t know why. When I woke up the next day, I had the same visceral feeling. I was guided to put it on the wall and it hung there for a few days. I heard “paint the flag white,” which was intense. As I ripped the flag off the wall, there was an impression on the dry wall of stars and tattered stripes. I still have that picture on my phone somewhere. I was cleaning up some books and out falls a picture of a ship I had saved. I began to paint and finished the The 4th Flag on July 4, 2018, in honor of Frederick Douglass’ 1852 speech. Look closely and you’ll see a shackle swinging from the mast, little hints of Christianity, a fallen body within the forefront of the flag, and more. It’s an extremely powerful piece. 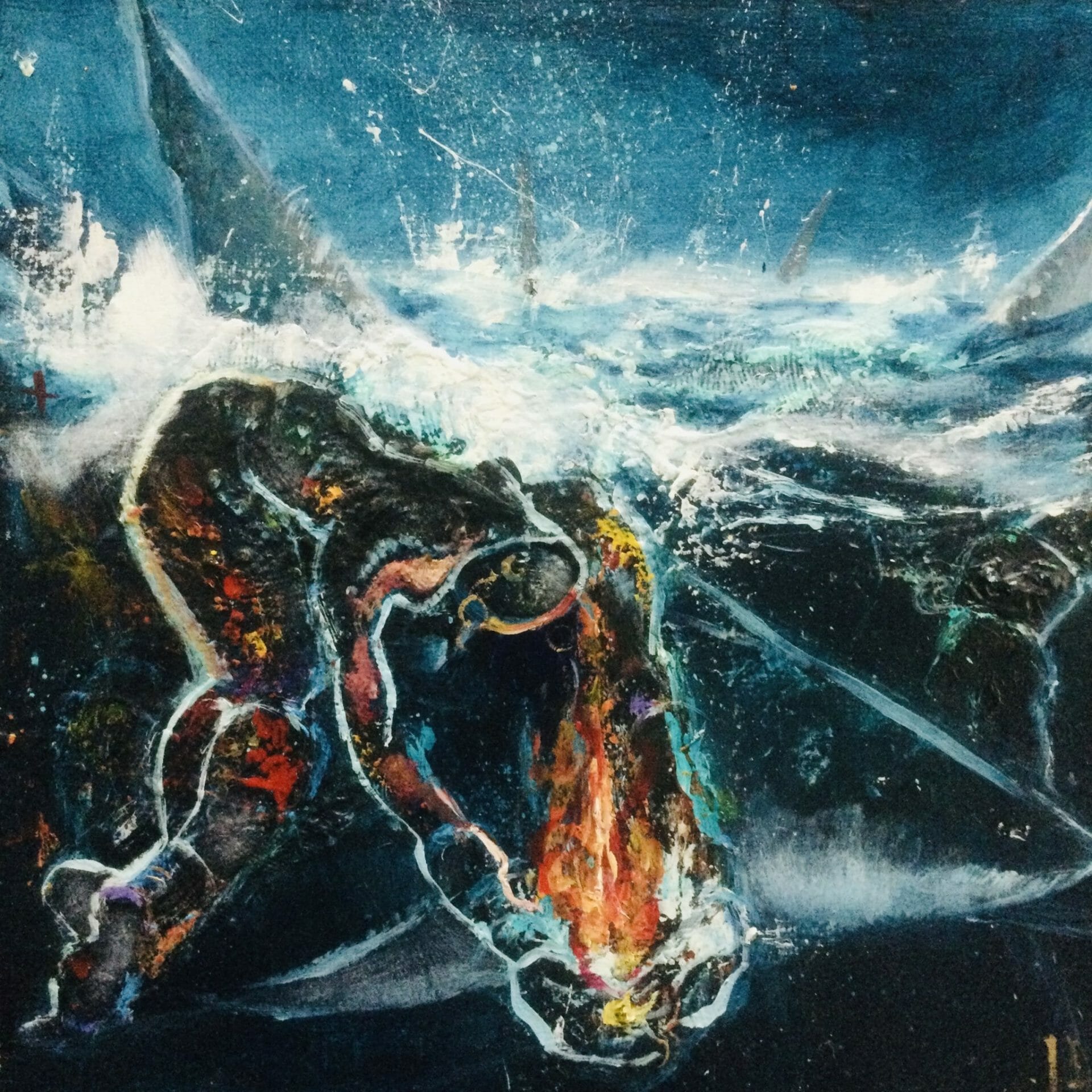 ArtsATL: What’s the story behind the shark imagery of “400”?

Henderson: Sharks are an iconic theme that you’ll see throughout the show this year, but they’re also iconic creatures. Some of these pieces are life-sized and textural, almost 3D, like a sculpture. Two years ago, I wanted to do something to honor the 400th anniversary of the abolishment of the legalization of slavery in a way that would attract and educate. “400” is about the spirit animal of the shark. I made a full-size shark (eight feet by nine feet). Look closely and you’ll see there are slave ships in the body of the shark. I went ahead and put dates like 1619, 1643 and 1831, but I didn’t list what those dates mean. Kids and adults will say, “wow, look at that shark” and then wonder, “what are those dates?” I want people to discover history by doing their own research.

ArtsATL: What is freedom to you?

Henderson: Freedom is one of those terms that’s used a lot, yet not necessarily realized. Freedom is acknowledging what’s truly in your heart to do, on a number of different levels. You hear people say that they want financial freedom, for instance. Well, my question is, “what are you going to do with those finances?” I think I’m actually feeling my true freedom for the first time in my entire life. Freedom is not independent of who I am. I’ve been supported by family, friends and others who have allowed me to do art. Freedom is waking up every single day with no concern how much money is in your account, coming into your account or not in your account. You have access to your day and you own it. That’s what my freedom is. We all have our own blueprint and we have to unravel what that is to really discover who we are.

ArtsATL: What’s one of your earliest memories of creativity?

Henderson: Maybe three years old is my earliest memory, to doodle. I remember drawing, always having a pencil or crayon in my hand. Over time it took hold of me where I was doing it on a daily basis throughout my entire childhood through high school. My mother would bring home reams of paper and pens and pencils, which were like my babysitters. I would rush home and get my homework done so I could draw. I emulated my favorite comic books, Spider-Man, Silver Surfer and Thor — I liked his hammer. I got to the point where I didn’t have to actually look at the comic books anymore. I can draw them from memory to a certain extent.

An American flag from Henderson’s family inspired “Fourth of July.”

ArtsATL: Did you realize you were destined to be an artist?

Henderson: It was a slow process. Growing up in a family that had such academic excellence, I didn’t know you could go to art school and be a professional artist. I thought I’d go to school and study the sciences because it was so abstract to me. I eventually studied graphic design and African American studies at University of Colorado, Boulder. I didn’t know fine art was brewing inside of me until later on in my career. I always had an entrepreneurial spirit and mind that didn’t necessarily pertain to art all the time. Just how my brain works [laughs]. Life has these whispers of happenstance. My mother encouraged me to go to graduate school for art business, so I could learn to sell artwork to corporations. I stayed a summer in Boulder and started hand-painting T-shirts. It turned into a business, then a corporation with angel investors. Next, a career of being a sportswear T-shirt designer with three other business partners. That trajectory led me to Los Angeles, becoming a graphic designer for the sportswear industry and eventually a senior designer for Nike and Converse. I’d work the corporate job; then I would work on my painting.

ArtsATL: What do you want your personal journey’s legacy to be?

Henderson: I realize throughout my career that I have continued doing things artistically, going in different directions, doing different things. Hopefully, the legacy that I leave behind through the work is to honor and heal all of us, not just African Americans, but all of us as a country and as a world. It’s about the art and education, because we all need to be educated about what happened to us.

ArtsATL: What have you discovered about yourself these past 10 years creating The Journey?

Henderson: One, there are energies and powers that are unseen that move us and guide us. It’s not every day, but I’m to be used as a tool for those voices for us. I’ve had a number of spiritual experiences through painting. I’ve been learning how to fuse that onto the pieces I’m doing now. In some of my earlier pieces, I was using the architecture of art, proportions, depth and structure, etc. Now? I throw all that out the window and just paint from that space. I’m learning I have the capacity and opportunity to hopefully help with the healing. We can protest; they can pass laws. I’m speaking to the healing side for African Americans and all Americans, but particularly for us because of our ancestors. We’re still afflicted by the atrocities. We have to learn how to take a deep breath and heal. Some of these images and pictures are not great reminders. I think it’s letting go of the shame and accepting what happened and realizing that there’s still a lot more work for me to do as an artist. I feel like I’m just now at the tip of the iceberg and want to continue to paint, heal, honor the ancestors and educate.