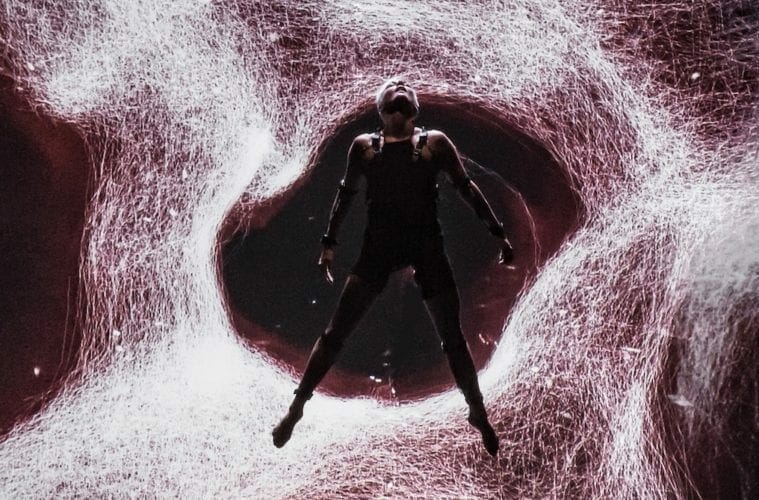 Camellini says "Dökk" uses darkness and light to reflect the cycles of life.

The universe was born in darkness, or so believes the hive mind of fuse*, an Italian studio and production company that blends dance and digital technologies. Arts@Tech will present its work, Dökk, at the Ferst Center for the Arts on October 4. While the title of this hybrid performance is derived from the Icelandic word for darkness, Dökk’s imagery is meant to simulate the light inside an imagined universe with a dancer suspended at its center.

During the show, fuse*’s universe is distorted as it shrinks, expands and explodes in a visually spell-binding symphony. Each light particle projected onstage represents the coordinates of a star inside a multidimensional system. Aerial dancer and choreographer Elena Annovi controls these stars with software that tracks her actions and sounds in real time. The motion-tracking technology and heartbeat detection are equal counterparts to Annovi’s movement, completely obscuring the viewer’s ability to detect who or what is initiating the next visual change. Dökk is the culmination of three years of work between fuse*’s producers, sound designers, programmers and collaborators. ArtsATL spoke with Luca Camellini, fuse* cofounder and codirector, about the company’s choices to include dance in this technological spectacle, and to uncover what lurks in the corners of their collective, creative minds.

ArtsATL: What fascinates you most about the interplay between dark and light, both in our relationships with consciousness and visually as it is related to this work?

Luca Camellini: Conceptually, we used the darkness as a metaphor to represent the life of a human being. In some cultures, earthly life is in fact represented as the shadow of light where the light also represents the full awareness of reality. In Dökk, this awareness occurs only at the beginning and at the end of the show, representing the life cycle: we start from the light with birth, we walk through life in darkness and we return to the light when we die.

ArtsATL: Why choose an aerial dancer to impart your narrative? What does her movement contribute to this “opera” for you?

Camellini: We wanted to create a work in which sound, set and movement were interconnected, intertwined and were perceived as one. All elements onstage had to be strictly connected to one another. In Dökk, we also want to explore the concept of interdependence, and this seemed like the best way of transmitting the idea that everything lives and is present and is connected somehow to our lives. The show starts with the dancer on the ground. The ground, or the stage in this case, represents contact with reality. During the show, and so metaphorically during the course of life, that contact with reality becomes weaker and weaker. It is influenced and interfered by all the events and the actions of the protagonist, until the contact with the ground and reality is completely lost. It is then found again later in the show, and in life, to close the circle with the return of gravity and the contact with the ground. ArtsATL: I am curious: how did the dancer’s heartbeat become a focus when it came to blending it with the software and performance?

Camellini: The heart is the first organ that forms when a new life is born, and it is the last one to die when we die. In Dökk, the audience starts hearing Elena’s heartbeat when she is still backstage. The heartbeat can be heard at the beginning of the show and in another two moments in the second half and at the very end. During the show, the heartbeat is connected to [two lights positioned in our reproduction of the universe called the Heartbeat Stars]. The interesting thing about these two stars is that they move close to one another and then far in circles. When they are in proximity to one another, their light becomes brighter, and when they move apart, they go darker. If we observe the light pattern on a graphic, it looks like an electrocardiogram [which is how they received] their name, the Heartbeat Stars.

ArtsATL: In a process with so many moving parts (dance, audio, technology), what did you find most challenging? What creative solutions were you able to achieve?

ArtsATL: Why bring art and technology together?

Camellini: Arts and technology have always been connected, in every era. The technological investigation has always been key to artists to explore new languages and forms of expression, so in a way, we’re not doing anything new, while at the same time trying to be innovators.