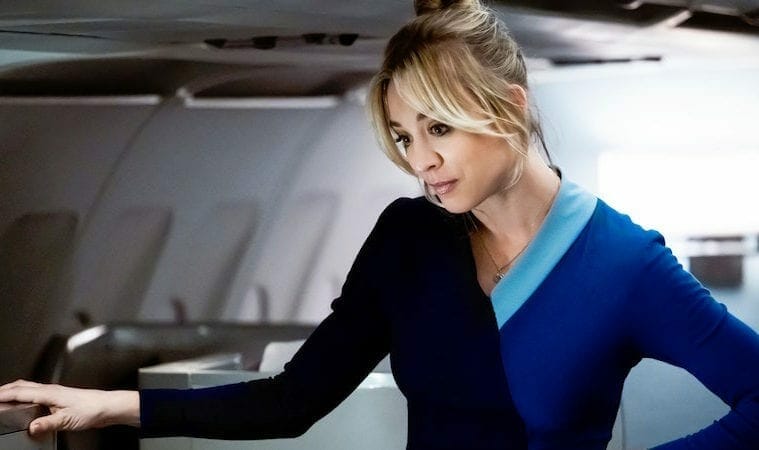 Kaley Cuoco plays Cassie Bowden, who finds herself in the wrong bed in the wrong hotel with a bloody corpse. Onetime Atlantan Steve Yockey is the executive producer and creator/showrunner of "The Flight Attendant." (All photos by Phil Caruso)

UPDATE: HBO max announced Friday (December 18) that The Flight Attendant has been picked up for a second season.

Atlanta theatergoers know Los Angeles-based writer Steve Yockey from his plays Blackberry Winter, Large Animal Games, Octopus, Pluto, The Thrush & the Woodpecker and Wolves, among others. His work has been produced at Actor’s Express, Dad’s Garage Theatre Company and Out of Hand.

Film and TV fans might recognize other credits. The onetime Atlantan co-executive produced and wrote for Supernatural (WB and the CW) and wrote for MTV’s Scream: The TV Series and Awkward. His latest gig is as executive producer and creator/showrunner for HBO Max’s new thriller The Flight Attendant. The eight-episode limited series — dark, twisty, comedic and typically Yockey — features Kaley Cuoco (The Big Bang Theory) in the title role. It premiered Thanksgiving Day, with fresh episodes dropping on subsequent Fridays. Its source material is Chris Bohjalian’s book of the same name. It follows the misadventures of flight attendant Cassie Bowden, who wakes up in the wrong bed in the wrong hotel with a dead man and has no idea how she got there.

His next project, according to a Deadline.com exclusive published Tuesday, is an hourlong drama for HeyDay Television based on the Ted Chaing short story The Truth of Fact, The Truth of Feeling (2013)

Yockey, 44, recently sat down for a Zoom catch–up with ArtsATL contributor Clifton Guterman, an actor, director and casting director. The two met in 2002 while working at Actor’s Express. Yockey was an intern. They crossed paths when Guterman was cast in the drama Beautiful Thing.

ArtsATL: You must be having quite an exciting end of this surreal year with The Flight Attendant, arguably your highest–profile project yet. How are you managing your feelings around something so large and available to a wide audience?

Steve Yockey: Part of me is thrilled that people seem really excited. To their credit, HBO Max and Warner Bros. went out on a limb, as did Kaley Cuoco [who also executive produces], because it’s a departure from the book in a lot of insane ways. It feels really validating that people are responding positively to it, but also I’m so tired and haven’t really had time to stop and take it in yet. I think it’s going to feel great in, like, a month?

ArtsATL: How did The Flight Attendant land in your lap for adaptation? Was it love at first read or did it take some time to know that your aesthetic was a good match for the material?

Yockey: Kaley is really the driver behind the project. She optioned the book to play the lead role, and Warner Bros. was excited to do the project with her. They went looking for writers and said, “Why don’t you take a crack at it?” I was working on a project for Fox and also busy with Supernatural, so I said, “OK, I’ll take a swing at it, but since I don’t have anything to lose, I’m going to really go big or go home.” What I wanted to take from this book was this idea of a woman at the center of a thriller and also struggling through self-recognition with alcoholism. And then I just extrapolated from there. For me, it was much more about capturing Cassie than hanging onto every piece of the book. The author has been incredibly supportive and, I think, very happy with what we’ve done.

ArtsATL: Did you write a pilot treatment to win them over?

Yockey: No, I had to go in and pitch my idea of what this series would be, who this woman was and how I would work. When I finally got to talk to Kaley, she stopped me about two minutes in and said, “Can we just hire him?” I was like, “What?” because that is not something that has happened to me ever. She is fantastically decisive. She’s been on TV since she was 4 years old — so like 30 years — but has managed to stay grounded with a gut instinct that she really trusts. That’s a great thing in the No. 1 person on your call sheet, and it’s a great thing in an executive producer. ArtsATL: How does your Flight Attendant differ from the book?

Yockey: There are story departures and some characters have been changed and adjusted, but largely the heavy use of Cassie’s backstory, flashbacks and everything that happens in “The Mind Palace” (which is what we call the hotel suite in her head and the hallucinations). . . . Anybody who’s seen my plays can probably guess that’s all from me. The book is very internal. It’s a lot of her thinking. So, you have to figure out very quickly: “How am I going to get this out onto the screen.”

ArtsATL: The show seems to have all the elements of your stage work — sex, substance abuse, danger, blood, a talking corpse, fascinating and flawed and fabulous leading women, magical moments, crisp dialogue, neuroses aplenty, the occasional stream-of-consciousness monologue, LGBTQ+ representation, love, lust and tension. What was it like incorporating everything you’re accustomed to putting onstage into TV?

Yockey: A lot of comes from my brain, but it’s a team of producers and obviously the entire writing staff. I was excited that the network was excited about these big ideas that are different from what you’re seeing right now in a lot of stuff. But HBO produced Lovecraft Country and True Detective, so they’re not afraid. This idea of creating a show that’s like Pop Rocks, like you’re going to put it in your mouth as one thing and it’s going to fizz up and turn into something else is what I do with my plays.

You start in the normal world, and then it quickly veers into something different. So I felt very comfortable going: “OK, here’s eight episodes, and there’s a beginning, middle and end. Let’s make everybody feel like they’re in something they recognize and then kind of pull them along.” It’s super fun and super validating. I think the difference is that in TV, if you’re doing stuff like a room full of rabbits or her running around in her own head, it has to be motivated by psychological storytelling because it’s not a supernatural show, right? So it’s all hallucinations, it’s all what she’s thinking. It’s giving us an idea of how she’s processing these thoughts in her alcohol-fueled haze. In theater you can put that stuff onstage as a metaphor for what the characters are experiencing and people will accept it. ArtsATL: What sets The Flight Attendant apart from other home–entertainment options one click away these days?

Yockey: I think it’s different than anything on TV right now. Different from a lot of what’s considered prestige television. It kind of snuck in under the radar and made a big splash, which I love because they let me make it weird. It’s as much a dark comedy and exploration of this woman’s psyche as it is a thriller. In the landscape of television and the landscape of our daily lives, it’s escapist. It is fun and fizzy and poppy, and it moves fast, but there’s also substance boiling beneath the surface, so I think it’s a really satisfying watch. It hits the parts of your brain that you want a TV show to hit all at once.  I think you’ll know pretty quickly if you’re a viewer who will enjoy it or not.

ArtsATL: You were mid-production when the pandemic hit. Apart from the disappointment of having to halt the momentum halfway through shooting, did COVID shift your writing, showrunning and producing approach?

Yockey: First we got the call that we were going to take a two–week break because, at the beginning of this, nobody really knew. Obviously that turned into six months. When we knew that we were going to come back, our team did a tremendous amount of work creating a safety plan that involved colored wristbands, zones, protective equipment, testing on set. I was tested three times a week. Our crew was tremendously focused and smart because they were very happy to be back at work. We were lucky that we did not have any major issues getting through to the end. But it was tense, especially when we went out in public. You’re shooting a sidewalk scene and real New Yorkers are walking by on the other side of the street wearing masks and looking at you like you’re insane because the actors aren’t in masks. It was interesting and sometimes scary.

ArtsATL: Now that Season 1 is out, can we expect to see future desperate decisions — not to mention vodka guzzling — from Cassie? Any chance you’ll take us on a Season 2 ride?

Yockey: We’ve changed enough that I feel like people who read the book are still enjoying the show because they’re getting to see new things. A Season 2? There probably will be discussions. There usually are when something is kind of noisy in the way The Flight Attendant is or makes a splash. I think it would be one of those things where we’d see a new Cassie Bowden adventure, like books in a series. What is the next bit of trouble that the flight attendant gets into?

ArtsATL: What’s next on your creative horizon? Might you executive produce and write something that you can shoot here?

Yockey: I miss theater so much. And I was very lucky to have a nice career as a playwright running at the same time I was doing this TV work. I have a play, Sleeping Giant, that originated at Emory University and got some attention. I’m excited for people to see that out in the world. And over the pandemic, I’ve almost finished two more “planet plays” to follow Pluto and Mercury. Neptune is a little bit of a cabin-in-the-woods horror play and Venus is a romance with two women onstage and lot of overhead lighting. Zosia Mamet plays the flight attendant’s best friend, Annie, a lawyer. Annie’s boyfriend happens to be a hacker. Both occupations are helpful.

ArtsATL: As we close out this crazy year, you almost have to go big or go home, right?

Yockey: I think that’s right. I mean, we’ve all experienced a level of trauma over the past year. Just the idea that everything stopped with this unclear sense of when it would start again? I feel like that anxiety is running in the background in all of our heads, amplifying things that would be bad but now feel worse.

ArtsATL: What does it mean to you to have honed your skills in Atlanta?

ArtsATL: So, come down to Georgia for your next big TV project. All of your friends here will help you populate it.

Yockey: I will say this: If I have a project that makes sense to film in Atlanta, I would do it in a heartbeat. I miss the Atlanta community, my friends there, my parents who are still there. An opportunity to come home and make a show would be great, and there might be something in the works in that respect. Fingers crossed.