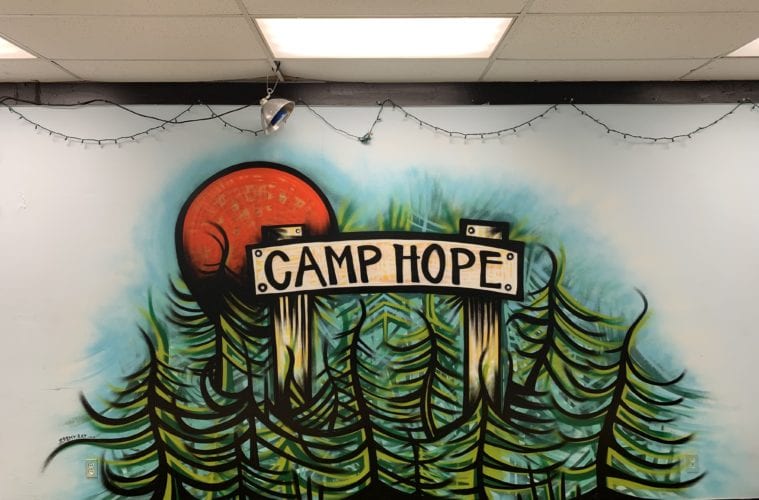 DIY venue Camp Hope will hold a final show on May 25. (Mural by Jeremy Ray)

Decatur’s small but spunky DIY venue, Camp Hope, announced it will permanently close at the end of May. After only one year of operation, the venue is known as a humble and inclusive space where many young bands were given the opportunity to step into the spotlight onstage. The venue’s final show — scheduled for May 25 — won’t be a large affair, more an intimate farewell with a few musicians who are passionate about the space. Owner, organizer and sole employee Dakota Floyd will perform solo work, along with blues-rocker Jeremy Ray, folksy howlers Yankee Roses and folk ensemble W8ing4UFOs.

Floyd first cut his teeth in the Atlanta music scene booking shows at WonderRoot, a nonprofit arts organization. By day, he teaches English at the K-8 Museum School of Avondale Estates. He also plays in punk bands New Junk City and The Wild, along with solo work and personally overseeing every event at Camp Hope.

In 2012, Floyd created atlDIY, an online community group that serves as a discussion board for bands to promote music and shows. A diverse group of artists and fans fill out the roster of more than 2,800 members in the Facebook group, as well as event organizers, venue operators and journalists in the Atlanta area and beyond.

Camp Hope will not go out with an explosion, rather as a smoldering ember gently extinguished in the night. In the final days of the venue, ARTS ATL sat down with Floyd to reflect on the past and discuss plans for the future.

ARTS ATL: Why did you decide to open Camp Hope?

Dakota Floyd: I always wanted to open a DIY arts space since I started playing music and going to shows in high school. About one year ago, I finally found the time, means and equipment to do it. And it felt like the right time since Mammal Gallery, Eyedrum and WonderRoot weren’t doing shows anymore. It was hard for local and younger bands to book shows during that time, and I’ve always been the kind of person to do something to fix a problem rather than just complain about it. My main goal was to have a place where I could do shows with my own ethics, meaning that all shows would be accessible to all ages and the venue would be a safe space for queer and trans-positive communities. Floyd: Being a tiny space has its disadvantages, of course, but the nice thing is that there’s no pressure to bring in a lot of people or money. You don’t need a press kit or a huge social media following to book a show at Camp Hope, and we’re willing to take a risk on young or inexperienced bands as long as they are nice people. I don’t think larger venues put up barriers intentionally, but they are almost always booked, and it’s hard for them to give new bands a shot. There’s also no bar at Camp Hope, so we’ve never had to deal with liquor licenses, bar expenses or underage drinking. Everything about the business has always been completely above-the-table.

Some bands play their first show that isn’t at a house or a birthday party here, and we’ve had record-release shows that wouldn’t have made sense anywhere else. There have been nights when I’ve gotten home and really felt that the show would not have been possible if Camp Hope didn’t exist, and that is really what it’s all about for me.

ARTS ATL: Since Camp Hope is all-ages and all-inclusive, have you ever seen any of your own middle school students there?

Floyd: I’ve never seen any former or current students at Camp Hope, but I’ll occasionally recognize high schoolers getting into their first local shows at places like The Bakery and the Masquerade. The future rests in the hands of young people, and I’m happy to see them getting into music. I think if you teach young musicians that there’s an alternative to playing the big music industry game, they can learn to book their own shows and be accountable for themselves and their art in the DIY culture.

Floyd: Put simply, the idea for the venue has outgrown its location. Camp Hope is literally just one room and a bathroom, so the space can be pretty limiting. The current location is in a shopping center that’s basically crumbling and abandoned, but that has always benefited us. It would be nice to have a space with room enough for larger art installations and some permanent furniture that we don’t have to move around all the time to make room. Even though Decatur isn’t that far outside of the city, I think being closer in-town would bring more people out.

We were robbed shortly after we opened last summer. Whoever did it basically stole everything in the building including our PA system. People were very sweet, and we got a lot of donations, so we were able to bounce back, but now rent is going up, and it’s getting difficult to run everything by myself. Since I don’t have any employees or interns, the venue’s schedule is entirely reliant on my own. Camp Hope served as a hub for young artists to break into the music scene. (Photos by KT Claire Photography)

ARTS ATL: Do you have any plans to open a new space in the future?

Floyd: Camp Hope was always a proof-of-concept project, just to see what worked and what didn’t. Even though we are closing, I think we succeeded in showing that a place like Camp Hope would get enough support to sustain itself and keep doing the kinds of shows that we did. When 2020 rolls around, I’ll have a better idea of who might be willing to go in on a larger space with me closer to Atlanta. It will definitely have a new name, but the ethos of the space being all-ages, accessible and accepting of all cultures will stay the same.

I want to take the rest of 2019 to reflect and see if there’s even a need for a place like Camp Hope to exist. Maybe in that time someone else will have started something new. I would still consider that an accomplishment because part of our goal was always to show that anyone can do this if they are willing to actually work at it.