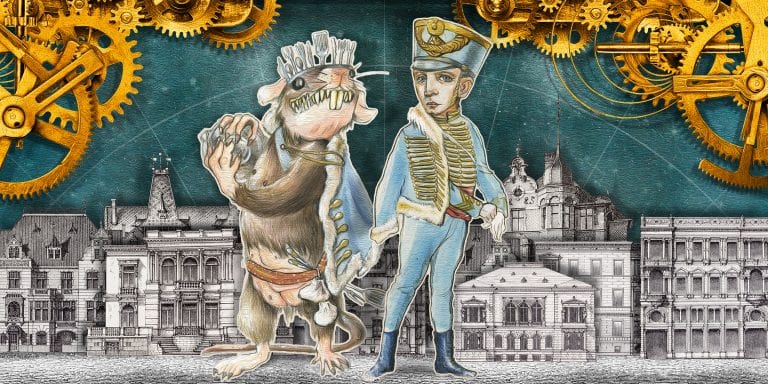 Atlanta Ballet's new production of The Nutcracker will receive its world premiere this Saturday at the Fox Theatre. (Costume sketches by Sandra Woodall)

A gilded leather-bound book opens, its covers spanning much of the stage. Giant botanical print images of flowers hover in the air backed by a shimmering green Aurora Borealis. To Tchaikovsky’s lilting “Waltz of the Flowers,” ballet dancers, clad in iridescent white, cascade past one another along crisscrossing diagonals, surging through expansive balletic lines in a final divertissement from Atlanta Ballet’s new production of The Nutcracker.

There’s a sway and flow to Yuri Possokhov’s choreography in Atlanta Ballet’s new production. But like the much-discussed visual components, most of Possokhov’s conception remains under wraps until this Saturday evening’s world premiere and production that runs through December 24 at the Fox Theatre.

Hints of what’s to come may appear on the Stahlbaum family Christmas tree — a stagecoach, a stern-faced Santa, an elephant, a wooden pull toy in court jester’s dress, a tiny boy inside a Christmas stocking with a letter in his hands. Like the tree, a cabinet will grow until its toy contents are life-size and little Marie’s armchair — the character’s favorite reading spot — becomes enormous, its seat raked at a precarious tilt.

Possokhov and a team of designers, with credits from Broadway and London’s West End as well as major ballet and opera companies, have spent the past two years developing this production. Their conception, which cost Atlanta Ballet about $3.7 million, replaces John McFall’s Nutcracker, which debuted in 1995, with a multimedia experience that merges Possokhov’s choreography with state-of-the-art video, lighting and scenery.

The story is set in a 19th-century German village, its plot hearkening E.T.A. Hoffman’s original 1816 story, The Nutcracker and the Mouse King.

While classically based, Possokhov’s choreography has a contemporary sense of flow, said Atlanta Ballet dancer Ashley Wegman. There’s no stopping to regain balance in vertically aligned positions. Every extended reach and spiraling suspension flows directly into another, and this — along with complex cuing, due to the layering of dance and visual effects — poses new challenges for many of Atlanta Ballet’s dancers. Dancers are “stepping up,” artistic director Gennadi Nedvigin said, in line with his plan to raise the company’s artistic profile.

He created Don Quixote and the upcoming Anna Karenina for Joffrey Ballet (to premiere in February 2019) and three full-length productions for the Bolshoi Ballet. As for Atlanta Ballet, The Nutcracker will be Possokhov’s fourth work to enter the company repertoire, after Classical Symphony, Firebird and Don Quixote.

ArtsATL dance editor Cynthia Perry interviewed Possokhov earlier this fall, before he headed into the thick of creation.

ArtsATL: How did it come about that you would create a new Nutcracker for Atlanta Ballet? It’s a smaller company, in transition. Why did you agree to take on the project?

Yuri Possokhov: When Gennadi approached me with the idea of choreographing a new production for Atlanta Ballet, there was no way I could refuse. With so many different Nutcracker productions already being performed, as well as the large number of choreographers working today, I consider it very lucky to even have an opportunity to create another version.

Adjusting to a company’s smaller size does not pose a problem for me. It does not significantly change my creative approach. However, because of the smaller number of dancers, there are some challenges when staging a larger production.

Considerable effort goes into establishing and dividing roles, adjusting the approach to scene changes and sometimes even simply choosing the number of dancers for certain sections of the performance. But all these are small issues when compared to the excitement of creating this ballet.

ArtsATL: In approaching the concept, I understand that you decided to adhere to tradition and look back to E.T.A. Hoffman’s original story. What changes or twists are being added that we wouldn’t see in other productions?

Possokhov: There exists a recently popular tendency for theaters to alter the time and setting of the original Nutcracker story. Examples of this can be seen in productions performed by San Francisco Ballet and Chicago’s Joffrey Ballet, among others. In contrast to this, we decided to return to the basis of E.T.A. Hoffmann’s original story. I can’t say that we returned entirely to his tale, but the feeling and environment of Hoffmann’s time will be present in our ballet.

We will try to introduce a bit of a contemporary twist to the show, using newly available technical and visual novelties to excite returning audiences as well as to attract new ones.

ArtsATL: Gennadi Nedvigin has put great effort into expanding the company, solidifying dancers’ technique and bringing in repertoire to develop their artistry — including three of your ballets. The goal is to put Atlanta on the international dance map. What evidence have you seen that his efforts are coming to fruition?

Possokhov: Knowing Gennadi for many years as an international artist and a high-level professional, I understand his overall determination in wanting to raise the bar, ability and presence of his company. I fully agree and support his developmental vision. All of his recent artistic changes have helped me correctly express my own ideas choreographically. The biggest evidence of change is the elevation of artistry and technicality amongst his dancers.

ArtsATL: Nedvigin has described your style as “extremely elaborate and demanding.” So far, how have Atlanta Ballet dancers handled your choreography?

Possokhov: Since I consider myself as a choreographer with a classical background and inclination, it’s important for my productions to contain difficult technical elements. I believe that younger dancers are eager and embrace the challenge. When speaking about Atlanta Ballet’s artists, I never doubt their ability, and trust them with these complex elements.

As pedagogues and choreographers, the most important thing we can do is continue to instill confidence in our dancers so they can more easily master new styles and overcome these challenges.

ArtsATL: What do you hope Atlanta Ballet will achieve with this new version?

Possokhov: Throughout all the work on our new Nutcracker production, the focus is not directed towards the company, but rather the spectators. Our life is surrounded by technological progress, and we must attract new audiences. I think we can achieve this goal with the help of The Nutcracker, by bringing together family and friends and creating new memories.

I hope the result of the many months of hard work from all those involved in bringing this together will resonate positively with everyone who comes to watch. Welcome!