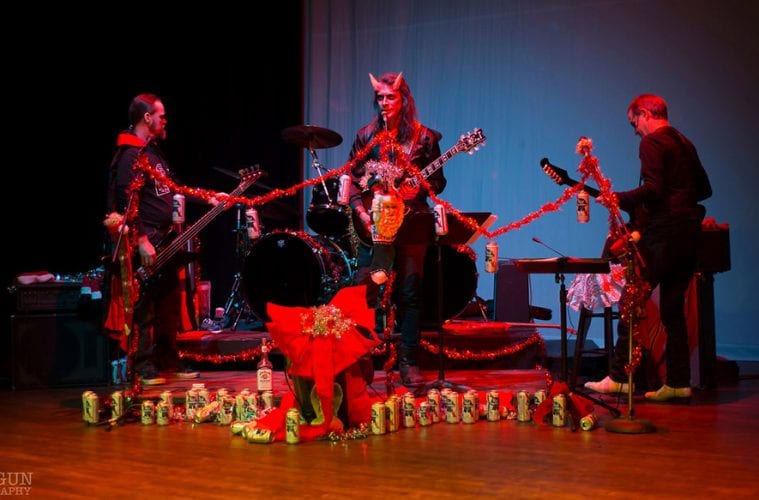 7 Stages is the last place you’d expect to see Ebenezer Scrooge, the Nutcracker Prince or other Christmas mainstays of the performing arts. The Little Five Points playhouse embraces an avant-garde, anti-commercialism sensibility that makes it an interesting place during the holidays. For years, they partnered with the Little Five Points Rockstar Orchestra for “Krampus Christmas,” a profane, head-banging showcase of the famous “anti-Claus” of European folklore, but they took a two-year hiatus from the tradition.

In thinking of a way to bring back Krampus with some festive Yuletide programming, 7 Stages artistic director Heidi Howard hit on the idea of presenting the theater’s annual Curious Encounters show with a holiday spin. Curious Holiday Encounters will take place throughout 7 Stages at 7 p.m., December 6–8, and 5 p.m., December 9.

Curious Encounters began with Michael Haverty, puppeteer and former associate artistic director of the company, who proposed that the company curate an evening of small, immersive theater pieces staged throughout the building. As a new annual tradition, Curious Encounters begins with Howard soliciting entries from artists and asking them to submit ideas based on a particular theme. While previous shows have included such themes as “Curious Literary Encounters” and “Curious Queer Encounters,” this year the participating artists approach the holidays from unique angles.

Each evening’s performance runs three hours, but Howard says that theoretically, an audience member will be able to go through the building and see each encounter within about 90 minutes. “I want to keep the informality of it so it feels like a Choose Your Own Adventure game for the audience,” she says.

In the black box space, The Little Five Points Rockstar Orchestra presents a condensed version of its adults-only Krampus show, including a performance of Spinal Tap’s “Christmas with the Devil.” “Krampus is pissed off that he’s become popular, so he’s doing an all-call for auditions for replacements. The audience gets to do various contests like a cornhole toss, with the winner getting tattoo vouchers or tickets for a burlesque show,” says Howard.

While “Krampus” is performed for less than 30 minutes at 7:30, 8:30 and 9:30 p.m., on the main stage, Gotta Dance Contemporary is performing The Grand Holiday Colorup on the hour. “It’s a movement scene based on the idea that Christmas originated with traditions of family, religious practices or whatever, but we’ve covered or colored it up. They’re starting with blank canvas and white space, which the dancers cover with paint on their bodies,” says Howard.

In the lobby, Michael Haverty’s The Object Group will present Great Party. “Reay Kaplan, who frequently works with Michael, will be inside a huge kaleidoscope, making holiday cards.”

The female-fronted company Weird Sisters offers an off-beat take on caroling in the building with Fornacalia. “They’re doing an homage to Fornax, the goddess of furnaces, who makes sure we have good bread in the holiday season. They’ll be caroling through the building in baker hats,” Howard says.

Aris Theatre, a company that focuses primarily on Irish, Scottish, Welsh and English storytelling, explores the myth of NORAD’s “Santa Tracker” in the 7 Stages offices. In addition, director Rebekah Suellau’s Madonna’s Holiday Cruise takes place in the upstairs lobby, and poets from Java Speaks address the meaning of citizenship with A Citizen’s Encounter.

Howard acknowledges that curating such a complex, unusual show can be a challenge. “I think my role is just to continue to try to make it cohesive and make this massive theater experience manageable.”

She says that the audience and artistic response to Curious Holiday Encounters may influence its future. “I’m thinking about whether this can be our holiday thing, a holiday experience that’s not a traditional holiday tale.”

So, it may not be too late to write your letter to Krampus.