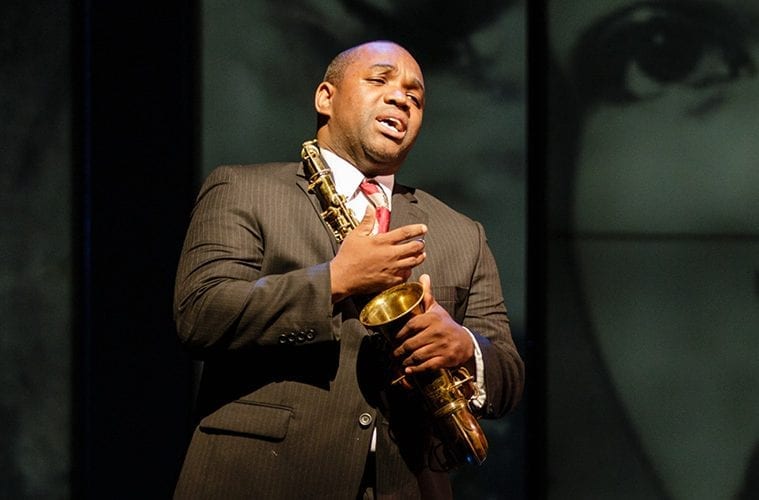 According to playwright Bridgette Wimberly, poetry is the backbone of all her work. She started writing in her teens, and as she got older and her poems grew longer, a friend suggested she write plays.

She was participating in a playwright mentor program in New York when she was told to pick two characters, a color and a sound and write a scene. “No pressure,” she laughs. Out of that came Saint Lucy’s Eyes, a two-act play produced Off-Broadway and starring the legendary Ruby Dee. In 2003, Ruby Dee reprised her role in a production at Atlanta’s Alliance Theatre.

Wimberly had gained a reputation for forceful, unvarnished portrayals of life in mid-20th-century Black America when her brother, musician Michael Wimberly, heard through the grapevine that Daniel Schnyder had been hired to compose a new opera on Charlie Parker. He suggested his sister as librettist. “I have to write this libretto,” she realized.

Charlie Parker’s Yardbird premiered at Opera Philadelphia in 2015. The Atlanta Opera production runs September 27–October 7 at Le Maison Rouge at Paris on Ponce. Wimberly recently sat down with ArtsATL to discuss her opera.

ArtsATL: You have a lot of experience writing for the theater, but this is your first opera. Was there a learning curve?

Bridgette Wimberly: Writing a libretto was much more challenging for two main reasons. Although I had seen several operas, I had never written one nor had I ever read one, not counting the titles projected on the backs of seats. When I got the opportunity to write this libretto, I immediately read a number of published librettos of popular operas. I loved the poetry, the repetition of the language, the heightened drama, and the short phrases that told the story.

Secondly, opera is a collaborative process where the composer is in the driver’s seat. It is very different than writing plays where the playwright is queen of her own creative destiny. Luckily for me, composer Daniel Schnyder’s only request was that we depict Charlie Parker’s main quest: to write new music for an orchestra of forty musicians — something he spoke of often but never accomplished. The goal was to depict snippets of his life that ideally illustrate his quest to change this world through his music. 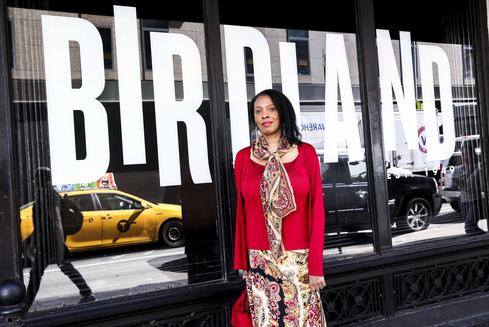 ArtsATL: The way Charlie Parker lived his life certainly provides a librettist with plenty of drama. His drug use ties in to today’s opioid crisis; there’s intrigue around his genius, and he occupies an important place in American history. How do you suss all that out?

Wimberly: Researching and writing about another human being is an enormous responsibility. It is also a spiritual journey into someone else’s being. I felt connected to him in some way. Listening to his music, listening to his voice, looking at photographs of him and his family, getting to know these people who loved him, who he loved, the pain he left when he died, as well as the legacy. Ironically, because my uncle idolized Charlie Parker, I had heard of him since I was a girl — none of it good, particularly his heroin addiction, which my uncle also acquired in his quest to be as good on the saxophone as his idol. Parker and my uncle shared the same birthday, August 29, and they both died from heroin abuse after living about the same number of years (even though my uncle was fourteen years Parker’s junior).

ArtsATL: You have devoted much of your career to women’s issues. How does that perspective filter into this story?

Wimberly: Charlie Parker, Jr., led a full, complicated life in his short 34 years, but there’s only so much that could be included in a 90-minute opera. What interested me most was the women in his life, particularly his mother, Addie, who loved her only child to the hilt. As a woman, I could identify with her, with each of his wives, all different, and the baroness Nica, who carried the burden of watching him die in her hotel suite, and the scandal that followed her to her death. There was a lot of music in each of their respective stories, plenty of high notes of joy and low notes of sorrow. Indeed, I write stories about women mostly, even when the protagonist is a man. Charlie Parker, Jr., did not write an autobiography. His story as a man and a musician is included in the biographies of these women.

ArtsATL: I understand you have strong memories associated with Atlanta. Can you tell us about that?

Wimberly: It’s been 18 years since I was last in Atlanta with the production of my play Saint Lucy’s Eyes, starring Ruby Dee at the Alliance Theatre, the very large Alliance Theatre. What a pleasure and huge opportunity to have my work produced there. This was my first trip South. My grandmother was born in Columbus, Georgia. It was nice to at least spend time in the state where she was born. During the run of my play, Ms. Dee called me every Monday, her off day, to tell me how things were going. “Oh,” she’d say, “the crowd here, especially the Sunday matinée groups, they are so lively! They are talking to me from their seats!” And we would laugh and reminisce, and I would wish I was there.

The closing night performance was the big surprise. Because Ms. Dee was starring in this play, everybody you ever heard of came to see it. But when I heard Ms. Coretta Scott King was coming with her family, I was shocked, honored and terrified!

As a writer, we put our characters in stories in a place and time in history. That place, in the first half of Saint Lucy’s Eyes, is Memphis on April 3 and 4, 1968. Ms. Dee’s character’s husband is a Memphis sanitation worker on strike hoping Martin Luther King, Jr., will help their dire situation. [At the play’s climax, the characters learn of MLK’s assassination.] I am honored that the real history-makers came to see my piece of historical fiction. Even to this day, I am truly humbled.