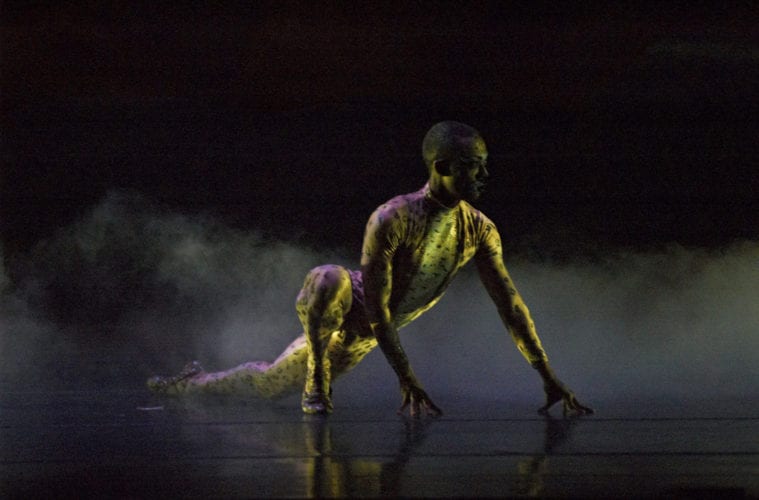 Calvin Gentry will dance the title role in Ballethnic Dance Company's Meet the Animals of The Leopard Tale.

Q&A: Ballethnic’s Nena Gilreath on The Leopard Tale and the will to survive

It’s a story of survival – not just for animals on the West African savanna but also for a multicultural ballet company preparing to celebrate, in 2020, three decades of creating professional opportunities for African American dancers in Atlanta.

This Saturday and Sunday, Ballethnic Dance Company will present Meet the Animals of the Leopard Tale, a one-act version of its signature work, The Leopard Tale, in an immersive African setting, at the Georgia International Convention Center. Ballethnic will welcome long-time collaborators Edeliegba Senior Dance Ensemble and music artist Adam McKnight in a participatory experience geared to appeal to audiences of all ages.

The Leopard Tale, choreographed by Waverly Lucas, also represents Ballethnic’s persistence in creating a style that combines the rhythm, fluidity and dynamism of African diasporic dance forms with the pointe work and architectural lines of classical ballet.

ARTS ATL talked with Ballethnic cofounder Nena Gilreath about the upcoming production, The Leopard Tale’s role as a signature work for the company and how, like the title character, Ballethnic Dance Company persists, despite the difficulties of sustaining a ballet company in Atlanta with a largely African American audience.

ARTS ATL: The Leopard Tale goes back to the early days of Ballethnic Dance Company. What twists or changes have you made to this particular production?

Nena Gilreath: We’re trying to build audiences by doing things in different spaces, in different ways and with a new spin to attract different people, and people who might not ordinarily go to a theater.

We’ll travel into the domain of the leopard, and we’re going to add an audience participation aspect. Everybody likes the parts where the performers transform into leopards, leopard kittens or vultures. But what does that really take? There will be moments when audience members will get a lesson on making their arms become like wings. It’s fun because it’s a lot harder than people think it is.

Also, we will invite people who have come in their favorite animal prints to come onto the stage and showcase that. We’re also partnering with a middle school art teacher who will help us transform the environment into an African landscape. And Waverly has a couple of surprises that he’s working on with the children.

ARTS ATL: What are some of the challenges of restaging this production?

Recently, because we haven’t been doing it every year, we’re seeing the difficulties of the students, and some of the grownups, getting the movements into their bodies. It’s that risk, between using your ballet technique but also applying all the other dance forms that you’ve ever taken — the modern, the jazz and the rhythm of tap and making that work with the animals.

It’s also hard, the discipline of getting people to be as uniform as animals are. It’s been quite the rehearsal process, trying to get all these things within everyone, from the very young to the very old. For the grown up people, those of us that did the snake scene, we worked on our snakes for years — how to make your back look fluid and loosen your neck. You have to hold and let go at the same time.

ARTS ATL: Coming back to the mission of Ballethnic and the role you all have played in providing a place for classical dancers of different . . .

Gilreath: . . . Races, body types, ages — there are so many layers in what we’ve done. We’ve created this access to the arts for people who otherwise would not have had an entry point.

Early on, we had to find a way for people to like ballet — all the people who said, “I hate ballet.” With ballets like Leopard Tale and Urban Nutcracker, people began to tell us, “Oh, but I like y’all’s kind of ballet.” So, making it accessible, making people feel like they understand, making them feel like they belong.

ARTS ATL: When you all founded this company, there weren’t many opportunities for classical dancers, particularly those who were African American, to have careers in this city. Is that about right?

Gilreath: That’s right. There were schools, but when we arrived from Dance Theatre of Harlem and began dancing at the Atlanta Ballet, that surprised me. People always said, “This is the Black Mecca. You can do anything.” I saw it in terms of the medical field, in business and other fields. But in terms of being paid to be in the arts, there was not that opportunity in dance. ARTS ATL: Why does it seem harder now?

Gilreath: There’s something that’s very difficult about being an African American and getting the support on all levels. Part of it may be because of our constituents. When I look at the people who come through Ballethnic, it’s not like everybody works a corporate job. For people who work at a corporation, there’s automatic resources, matching gifts and board members that come with the corporations. A lot of our parents are hourly working people, entrepreneurs. So we don’t have that level of support.

In the beginning, everyone said we had to prove that we had a stellar product. So, all the beginning years were about establishing a product. We started out being very project-based, probably like a lot of the new companies.

But then eventually, if you have enough projects that coalesce into a season, then you have overhead. But do you have the infrastructure to support and sustain that? So being able to expand and to get people to beat the pavement — to raise the funds and raise the awareness — and to have the money to pay them.

And then, you know, in our community, many people don’t understand that being a creative is something you have to do, if that is what you’re chosen to do. You’re driven. It’s a passion. You have to do it or you’re not happy. It’s a call.

A lot of times, people don’t give it the credence, so they don’t necessarily believe that they want to put their money there.

ARTS ATL: In terms of professional opportunities for African American classical dancers in Atlanta, do you feel like the community has changed? Gilreath: Not on a professional level, no. All day long, studios and schools are opening. You have all these trained people, but where are they going to work? Dance Theatre of Harlem has a smaller company now. Then there’s all the other initiatives, but be for real. How many black dancers are going to get into the companies?

ARTS ATL: It’s not difficult to envision that ballet companies across the country could be more inclusive and have a more diverse roster of dancers — not just an international roster but one that accurately reflects the ethnic diversity of the cities that support them. The International Association of Blacks in Dance has initiated the Equity Project to help advance racial equity in professional ballet companies. Atlanta Ballet and about 20 American ballet companies have joined the effort, and formal conversations were held last January at a conference in Dayton. What was the general thought? Do people believe that kind of change could happen?

Gilreath: I’m not privy to the actual formal conversations that occurred. For me and Waverly, there’s a few of us that have had the experience of being black in a white company, and also dancing with Dance Theatre of Harlem — and a few of us who have directed our own companies that know the complexity of everything that we’re talking about. I don’t think it’s going to happen in my lifetime until some of the older directors and patrons retire or die out. There’s got to be a real shift.

In the meantime, I say to dancers, why do you want to be somewhere where somebody doesn’t really want you anyway? Why go and be beaten down? And then we experience some of the people who were in larger companies, and it wasn’t what they thought it would be. What happens with those dancers afterwards is not good. Their spirits are kind of deflated.

What’s interesting about Ballethnic is that we’ve always been people about our own kind of business and creating the life that we want. We’re not about complaining. We’re always looking for the prototypical Ballethnic dancer, and it’s a person who’s kind of a renegade, who wants to make their own way, has something to say and wants be a part of what our mission and vision is. That’s typically not what you find in larger companies.

ARTS ATL: Coming back to The Leopard Tale — clearly, it’s great for kids with all the animals and the story. But you’re dealing with serious themes.

Gilreath: Death, endangered animals and the will to survive. We’ve always compared the Leopard to Ballethnic. Every time the Leopard encounters a new predator, obstacle or barrier, the Leopard breaks through. That’s what Ballethnic’s journey has been. There’ve been so many obstacles and barriers — everything that this animal encounters. But nothing can destroy the timeless Leopard. And that’s what we feel about the mission of Ballethnic. There’s a will that goes into preserving that legacy.

So, the Leopard is our story. It’s that will to keep pushing, to keep doing it against all odds. It is a timeless story because, if you think about every person — if you live long enough, you’re going to have to dig down and push and keep going, whether you’re hungry, in drought, tired, older, sick. There’s something in you. Just like the Leopard, you have to keep pushing.