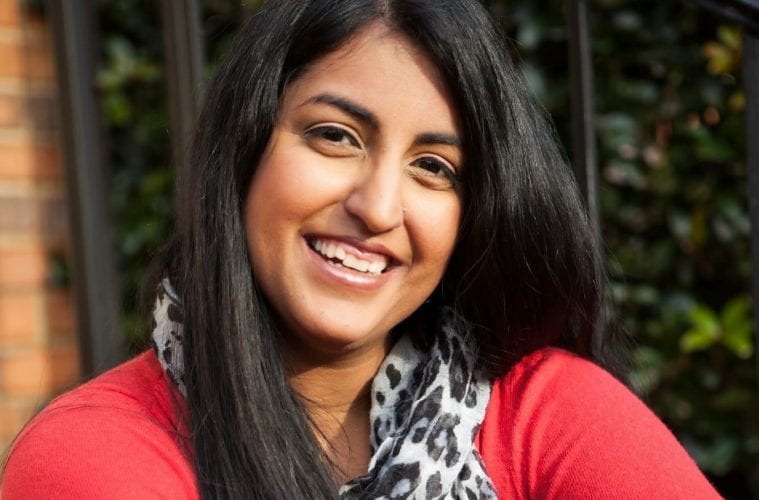 Aisha Saeed’s compelling debut novel, Written in the Stars (Penguin Young Readers Group), follows the dreadful consequences that plague Naila, a 17-year-old Pakistani American girl, when her immigrant parents discover that she has gone to the prom with her boyfriend.

Saeed, who was born and brought up in Florida, knew that neither her immigrant parents (who moved here from Pakistan in the 1960s) nor any others would allow their daughters to go a prom — a mixed affair with dancing — and didn’t even try.

But the theme of her book is the difficulties of being a “good girl” in different cultures. The situation is reversed, however: Naila is whisked away from the American suburbs to small town Pakistan, her dreams of love and a career are dashed as she enters into a way of life she barely knew existed.

ArtsATL: How did you get the idea for your book?

Aisha Saeed: Growing up, some of my childhood friends were pressured into marriages they didn’t want to enter into. While none of their circumstances were exactly like [my] protagonist, seeing what happened to them and reading about the practice of forced marriage the world over served as the inspiration.

ArtsATL: Your title is a nod to the Pakistani belief that God has foreordained marriages, but your novel resists the idea of destiny.

Saeed: Too many times I’ve seen people who are in difficult marriages, or pressured into marriages they didn’t want, rationalize staying in such marriages by saying it was just written in the stars, or kismet, one’s destiny. Destiny is something very personal to each person; some believe in it and some don’t. But if one does believe in the existence of divine destiny, it still shouldn’t be used to avoid making choices to better one’s circumstances. Destiny doesn’t mean one should give up. Naila, is told by people to accept her marriage even if she doesn’t want it because it’s her destiny. My own hope is readers can see that while destiny may or may not be preordained, as human beings we don’t know what is meant to be, so it is upon us to make our choices and stand up for ourselves. What comes from trying our best and never giving up is our true destiny. Saeed: Naila loves her parents, and she respected and trusted them. Had they given her the same trust in her decision making and her choices, the [book’s] tragedy may have been avoided.

Saeed: I think both Naila and her parents viewed a hyphenated identity as being a strength, and they value both their Pakistani as well as American identity. Naila went to prom, a very American tradition, but she wore a lengha, a Pakistani traditional dress. She appreciated her parents’ cooking and language and her close-knit family. She valued both parts of her identity. Her parents also valued both parts of their hyphenated identity, and her father was initially very proud that she was to go away to college to pursue a medical degree. Still, as immigrants they were not as immersed as Naila in the western half of the hyphenated equation, and this became a struggle and challenge for both of them.

ArtsATL: In your essay “Leap of Faith” for the anthology Love, InshAllah: The Secret Lives of American Muslim Women, you talk about how the matchmaking world of Austen’s novel Pride and Prejudice, so alien to your high school classmates, mirrored your own Pakistani world. Would you say a semi-arranged marriage such as your own is the best of both worlds?

Saeed: If one wants to get married in a traditional South Asian courtship process, then a semi-arranged marriage is the best of both worlds. You have input from your families, but you get to meet and talk and truly decide for yourself without any pressure from anyone either way. It’s more like a blind date than anything else, really.

While traditional arranged marriages do still happen where people consent to marriages sight unseen, I think that, especially in the United States, the semi-arranged marriage model is overwhelmingly the most common way to go about it.

Saeed will launch her novel at 7 p.m. March 28 at Little Shop of Stories.