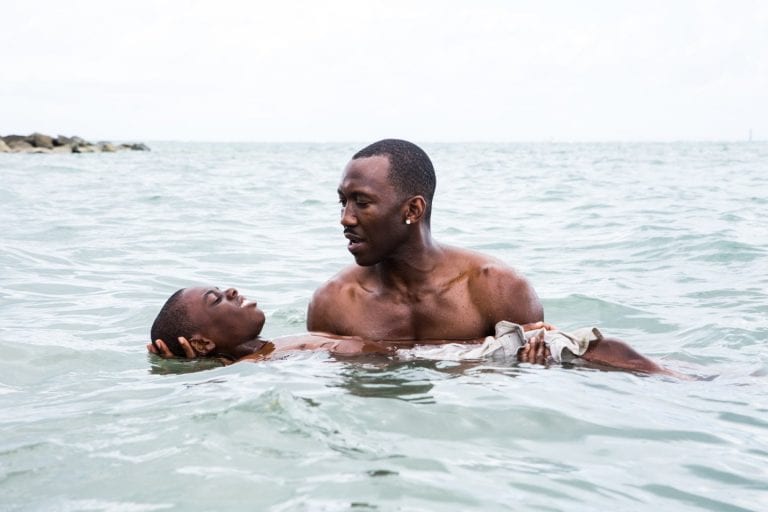 Moonlight, up for a Best Picture Oscar, is based on a script by playwright Tarell Alvin McCraney, who won the Alliance Theatre's Kendeda Playwrighting Competition in 2008.

Preview: This year’s Oscars is #NotSoWhite and includes a large shot of #RepresentATL

The lack of any nominees of color in the acting or directing categories in the 2015 and 2016 Academy Awards led to the creation of the hashtag #OscarsSoWhite. It could easily have been joined by a couple of others: #OscarsSoOld, #OscarsSoMale. The Academy voting pool has, for years, been dominated by pale-skinned industry codgers. The nominations reflected that bias.

The outcry after last year’s Oscars and the demand for diversity from filmmakers and journalists led to some positive moves by the Academy of Motion Picture Arts and Sciences. It expanded its voting membership significantly. According to the New York Times, last June it announced 683 new members. Among the newbies, 46 percent are female, 41 percent are nonwhite, and they hail from 59 different countries.

That’s a good example of addressing a problem head-on.

The 89th Academy Awards, to be broadcast live Sunday, can’t be so easily accused of whitewashing. Seven of the 20 slots in the acting categories are filled by people of color, and African-American director Barry Jenkins is among the five directing nominees. He’s also nominated for his adapted screenplay for Moonlight, a film starring almost entirely African-American actors (I spotted exactly one white extra, playing a cop). And it’s one of the nominees for Best Picture. So are Fences and Hidden Figures, focusing on African-American protagonists, and Lion, whose main character (and much of the cast) are Indian.

On a local note: Hidden Figures was largely shot in Atlanta and other Georgia locales. Moonlight is based on a script by playwright Tarell Alvin McCraney, whose In the Red and Brown Water was a winner of the Kendeda National Graduate Playwrighting Competition at the Alliance Theatre, which produced the world premiere in 2008.

In addition, Fences was produced at the Alliance in 1989, when Kenny Leon was artistic director. It was one of the first obvious examples of the way, during his tenure there from 1988 to 2000, that Leon intended to diversify the Alliance’s mainstage offerings and bring in more African-American artists, plays and audience members.

Three of the five nominees for Best Documentary Feature have African-American subjects: the James Baldwin profile, I Am Not Your Negro; 13th, about the preponderance of black men in American prisons, by Selma director Ava DuVernay; and ESPN’s long-form documentary, O.J.: Made in America.

We’ve learned the hard way over the past several years that we are not a post-racial society, though some of us dreamed we were. This year’s diverse lineup of Oscar nominees doesn’t seem to be a knee-jerk response to that realization, or to #OscarsSoWhite. Academy voters haven’t made token nominations to pad the ballot. No, the nominees simply reflect a year of excellent work, regardless of anyone’s race. Which is the way it should be.

So who will win? Well, that’s where things get cloudy, fun and unpredictable. I haven’t seen all the nominees this year, but for Best Picture, odds seem to be best for La La Land. Damien Chazelle will likely win Best Director, too. Hollywood loves movies about Hollywood. That’s the only explanation for how the sweet, forgettable The Artist managed to win Best Picture in 2012.

Then again, that year the competition wasn’t so strong. This year, I’d be happy to see La La Land lose to equally good, very different movies, like Hell or High Water, Manchester by the Sea and especially the small, exquisite, deeply powerful Moonlight.

On the acting front, Casey Affleck was long considered by pundits to be lead contender for Best Actor, playing an emotionally devastated man in Kenneth Lonergan’s feel-bad epic, Manchester by the Sea. But there’s a seriously strong chance that Denzel Washington could sneak in and grab his third Oscar. Fences is a talky movie, clearly adapted from the stage. But Washington won a Tony for the role when he played it on Broadway, directed by Atlanta’s Leon. His performance, riding the surge of August Wilson’s language, is phenomenal.

The same film serves up the closest thing to a sure bet on Oscar night. She’s been nominated before, for Proof and The Help, and this time Viola Davis is finally likely to deliver an acceptance speech for playing Washington’s wife in Fences. (It helps that her lead performance managed to get shrewdly wedged into the Supporting Actress category.) Still, Oscar’s supporting categories are always prone to surprises, like the time Marisa Tomei (My Cousin Vinny) beat out competition that included Judy Davis, Joan Plowright, Vanessa Redgrave and Miranda Richardson. Naomie Harris (Moonlight) and Michelle Williams (Manchester) are devastatingly strong in roles that really are supporting roles. While I want Davis to win, I’d be happy with an upset by either of them.

For Best Actress, Emma Stone will probably win as part of a love-wave for La La Land. Elle’s Isabelle Huppert deserves it, though, for delivering the most startling, daring performance in her long career. And if Mahershala Ali doesn’t earn the Supporting Actor prize for Moonlight, well, there’s just no justice.

But since when has the annual Oscar ritual been about justice? Shakespeare in Love wins over Saving Private Ryan? Crash over Brokeback Mountain? Dancing with Wolves beats Goodfellas? Does anyone ever want to watch Best Picture winner The King’s Speech again, or even Argo? And remember, Oscars have often gone to questionable winners: Mira Sorvino, Cuba Gooding Jr. and Christoph Waltz (twice! for delivering the same performance in two separate films). Well, you get the point.

If #OscarsSoWhite is behind us, at least for now, this could be the year of a new hashtag. In the wake of the election and passionate, political speeches at recent awards shows delivered by Meryl Streep, Mahershala Ali, Julia Louis-Dreyfus and others against Donald Trump’s policies, folks have been floating #OscarsSoOrange. For once, the usually gaseous, endless acceptance speeches could be a highlight of the ceremony, as winners use the platform to speak their minds about things more important than their agents’ names, and who they’re wearing.

Speaking of Oscars, there’s a latecomer nominee opening locally this weekend. Up for Best Animated Feature, the French-Belgium production The Red Turtle (the first non-Japanese film to be produced by Hayao Miyazaki’s famous Studio Ghibli) is a visually gorgeous oddity.

Almost completely free of dialogue, other than a few human shouts and cries, it’s a rare animated feature that’s not mainly aimed at kids. In fact, young ones might find it puzzling. When a young man is washed up, after a shipwreck, on a bamboo girdled island, we watch as he tries three times to sail back to civilization on a raft. Each time, though, he’s capsized by, yes, an enormous red sea turtle.

When the man confronts the beast, well, something strange and fable-like occurs. Think an amphibian take on The Secret of Roan Inish, and you’ll get the idea. The story isn’t much, but it’s primal, and the animation — especially the ways the film depicts water, and the slant of sunlight through bamboo — is breathtaking.