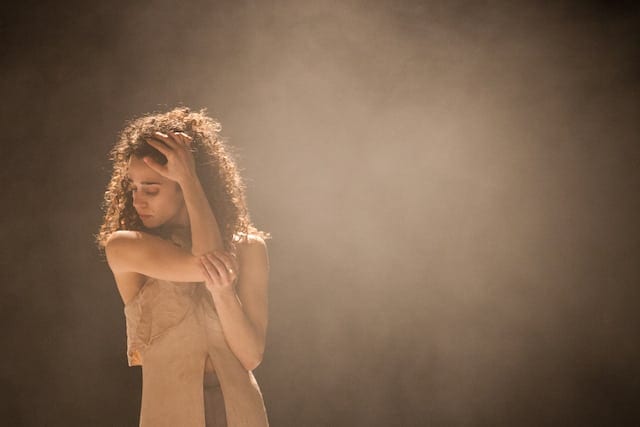 When Noa Wertheim, artistic director of the Vertigo Dance Company from Tel Aviv, speaks about her latest work Reshimo, her eyes dart around in an apparent effort to find the enigmatic source of the work. Simultaneously, they reflect a tenderness one would have gazing upon a newborn child. In their highly anticipated Atlanta debut, Vertigo brings Wertheim’s vision of past and present to the Rialto Center for the Performing Arts stage on Saturday, October 18. The heralded performance represents another indulgence in the Israeli modern dance scene, which is enjoying unprecedented attention and praise of late. Leslie Gordon, director of the Rialto and a vocal fan of Israeli dance exports, has been waiting for this moment for several years.

Gordon, in a breakfast interview, suggests that challenges sometimes associated with producing major companies from the Middle East were not too difficult to overcome. What stood in Gordon’s way were the large, complicated sets within which Wertheim and fellow collaborator and partner Adi Sha’al built for their repertoire. Mana — an earlier Vertigo work that was created inside a wooden house placed on the stage, and served as Gordon’s introduction to the company — was 18 inches too big for the space. “There are so many great pieces, but none would fit,” Gordon says. “When Noa revealed that Reshimo would be performed without a set, I had to pounce.”

In and of itself, the word reshimo has a poetry all its own, though some nuance could be lost in translation. A Hebrew word used in the Kabbalah, it refers to an impression left within: the imprint of light that lingers even after the light has been extinguished. Wertheim speaks with clarity and sincerity, suggesting that her new piece — a deliberate venture into simplicity — is something she holds dear. She admits to taking a personal risk by paring down, allowing the work to speak without elaborate scenery, costumes or lighting. Reshimo’s quiet beginning will provide images of gentle waves that carry the eight dancers into seas of memories. The illumination of man’s acquisition of the physical body — and later, profound human, earthly interactions that serve to fill our minds with memories so poignant they can only be felt — is where the piece then lives.

“There is a cycle with all things on earth and a cycle to light — we don’t know if we are going backward or forward — but we know that without will, we go nowhere,” says Wertheim. “Willpower creates movement.” The will of children, one’s desires — whether emotional or physiological — and human ambition helped Wertheim shape the material and movement for the work. Referencing the story of Sisyphus, dancers engage in climbing, reaching, striving — pushing the proverbial boulder up the hill. “They cling to mountains like we cling to each other.”

Vertigo celebrated its 20th anniversary in 2012 and with that milestone used a commission from the Fondazione Campania dei Festivale in Italy to create Vertigo 20. Not intended to be a retrospective, but rather a telling of the Vertigo story, the piece was highly acclaimed and seemed to catapult the company to more international touring and recognition. When asked about their skyrocketing visibility, Wertheim modestly acknowledged that more people might know about their work, but with that, the pressure of identity becomes greater. “There are expectations and it can make you afraid to try something new, but I also feel a little more strong; maybe I have more courage now,” Wertheim says.

Though each new piece delves into vastly different subject matter, Wertheim does have the consistency of her process, her musician/composer and the watchful eye of her partner. Providing movement sentences, Wertheim then creates scenes, asks dancers to manipulate her material and then begins laying each section into place. Her long-time musical companion, Ran Bagno, then becomes an integral component to the creation of the work by providing the sound score that submerges the dance into a unique time and place. Wertheim admits freely that what has changed over the years is that she works more from a place of awareness rather than intuition. She has a better understanding of what she hopes to achieve.

Perhaps what characterizes Vertigo is its sublime ability to turn intricate emotion and complicated human interaction into wildly physical episodes. Choosing to externalize the material rather than leaving it buried for audiences to uncover, Vertigo is unapologetic, seductive and delicate. The technically gifted dancers have varied backgrounds, but as Wertheim says, they “never forget they are human.” Vertigo’s institution is one that is socially minded and politically aware. Their organization has grown to include an international dancer training program, a dance school and an “Eco-Art Village” that rests in a lush valley between Jerusalem and Tel Aviv. They are decisively devoted to community.

There are many years of research, investigation and self-discovery that lie at the heart of Reshimo. It represents a hypothetical journey to places we have yet to go, and brings us closer to places we have been before. There has been generous support from the Charles Loridans Foundation, which Gordon credits for making the performance possible. There is a surge of interest from young dancers who are curious about what exists beyond their studios. There is the fact that Vertigo has been making more and more American appearances, which helped pave their way to Atlanta. Certainly, in one way or another, Reshimo will leave its own imprint long after the klieg lights go to black.