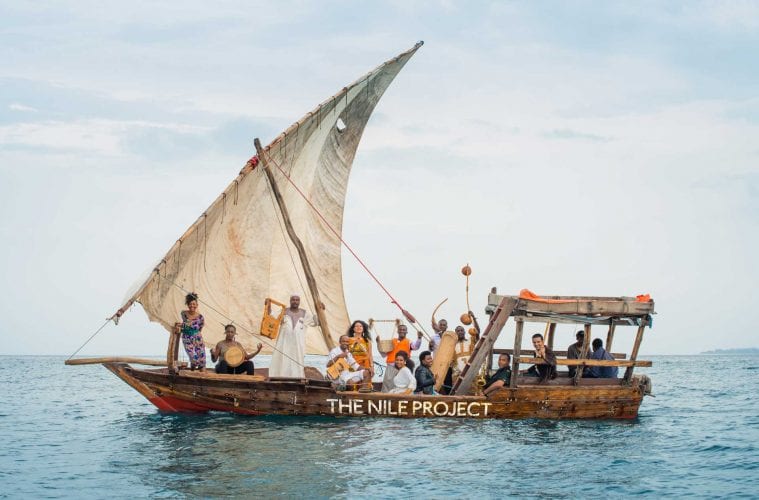 Preview: “The Nile Project” musicians raise their voices to sustain a natural resource

Mina Girgis says absolutely. The music collective he co-founded, the Nile Project, performs at Atlanta’s Rialto Center for the Arts on January 28, and though there’s no overt political content in the music itself, part of the collective’s aim is to build bridges across cultures and foster dialogue about one of the world’s most contested and imperiled resources, the Nile River.

“It’s an upstream–downstream dynamic between the different countries sharing the Nile,” says Girgis, a San Francisco-based ethnomusicologist who grew up in Egypt. Outside of Africa (the Nile is pretty much synonymous with the country), the river flows through 11 African countries that all depend on it as a vital source of drinking water, irrigation, jobs, electricity and transportation. “The downstream countries don’t want the upstream countries to take too much water by building dams. With the Nile being the longest river in the world, most of these people don’t know each other, and that is a big barrier in getting them engaged to solve these problems and have a dialogue about water issues. They don’t know who shares the river with them.” 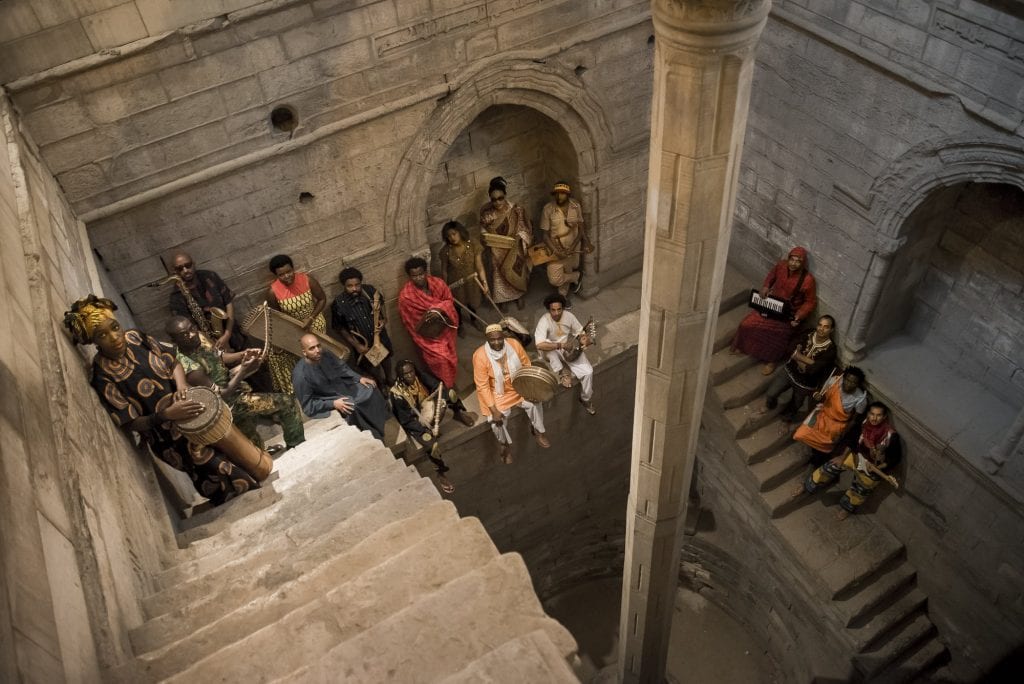 Girgis was originally inspired to create the Nile Project in 2011 after seeing an Ethiopian musician friend perform a concert in Oakland. “I realized that growing up in Egypt, I was never exposed to Ethiopian music or Ethiopian culture,” he says. The Blue Nile, one of the Nile’s largest tributaries, flows through Ethiopia, placing the neighboring countries in conflict about a potential hydroelectric dam in Ethiopia. “As a kid, I wasn’t even aware that Ethiopia shared the same river with Egypt. Here I was in San Francisco listening to this great music, asking myself why I had never been exposed to this. I knew that experience would be meaningful for Egyptians, knowing that in 2011 we were on the cusp of what has become the most complex water conflict in the world in the Nile basin.”

In 2012, Girgis and his collaborators organized the first of the Nile Project’s “Nile Gatherings.” The two-week artists’ residency brings together a small group of 12 to 18 traditional musicians from each of the various Nile countries, nations as diverse and disconnected as Uganda, Egypt, Kenya, Burundi, Sudan and Eritrea. “We chose to start with music because music is an engine for building cross-cultural curiosity and empathy,” says Girgis. “It builds the trust needed to engage in any larger collaboration.”

During the residency, the musicians teach each other about their respective musical traditions, and they collaborate on composing songs that combine languages, styles and rhythms. They play instruments from different cultures that are rarely, if ever, used together in performance: Egyptian flutes, Sudanese lyres, Ethiopian violins, Kenyan kettle drums, Burundian thumb pianos.

“They’re traditional musicians, but they’re also pretty contemporary in the way they’ve pushed their traditions,” says Girgis. “They’ve reinterpreted many of the things that come from these countries. They’ve added a lot to it. They play traditional instruments in the way that’s been passed down, but they’re adding a lot of originality.”

The first Nile Gathering ended with a concert, and with each subsequent residency, four in all, new musicians become part of the collective. The group’s reputation, both inside and outside of Africa, has also grown: there have been many concerts, two albums and larger and larger international tours.

Girgis says the biggest surprise has been the widespread American interest in the group. The performance in Atlanta kicks off the Nile Project’s second American tour, which brings the group to more than 20 cities across the country. “We had no idea when we started that this music would be relevant to the U.S.,” he says. “We started this project to get people in the Nile basin excited about each other and interested in one another. We started in Egypt, and we wanted to go on an African tour, which we did twice, but we were pleasantly surprised that this music was relevant outside of the Nile basin.” 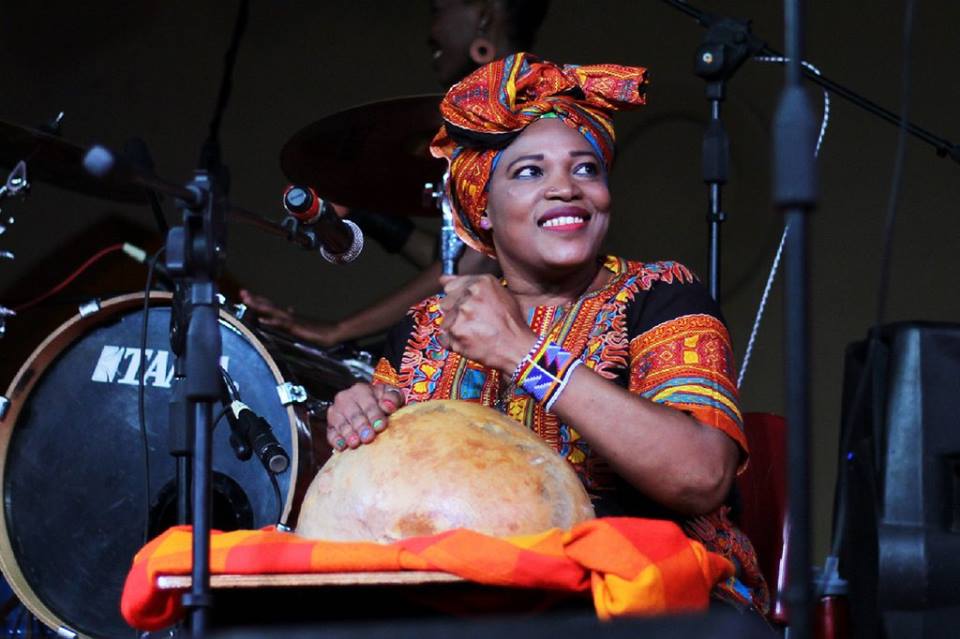 Musician Asia Madani during a performance with the group. (Image courtesy of the Nile Project.)

Audiences respond to the music, but many of the issues that the cross-cultural collaboration was created to engage with resonate with international listeners, as well. “When you look at a river that’s far away and a water conflict you’re not a part of, it allows you to look at your local sphere in a new way,” Girgis says. “We toured California in 2015 at the height of the drought. People were legitimately scared. When we had conversations about the Nile and its hydropolitics, they’re very similar to the western United States. It was an interesting mirror. It was a very helpful way for people to rethink their reality, for them to realize that what was happening to them in California was not so different from what was happening to other people in different parts of the world. That crystallizes many of the challenges we face with climate change in a very clear way. It’s in your backyard. It brings it home.”

Still, though the Nile Project has expanded to engage with scholars, students and local organizations in its mission to raise awareness about water issues, Girgis says the emphasis of the collective remains on music as a tool for starting a dialogue. “We’re not an activist organization,” he says. “We don’t take on any specific point of view, pro or against a dam, or pro or against any government or what they’re doing. We find ourselves more as the conveners that bring ideas together. I think what the Nile Project does is it takes the Nile issues and humanizes them. It gives them a face. It’s hard to become interested in a river if you’re not already an environmentalist. What the performance does is it puts it all in a language people can meditate on in a creative way. I hope in some shape or form our concert opens up some of these difficult conversations. For me to understand your priorities, I need to try as much as I can to put myself in your shoes.”