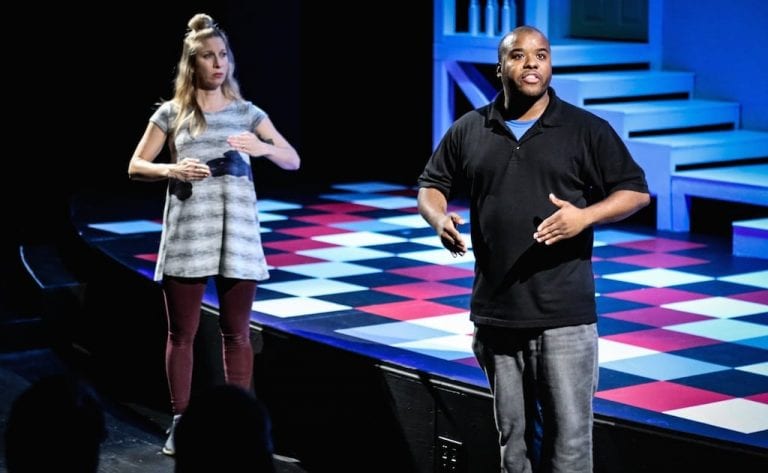 Alison Hastings and Mark Kendall put on a tour de force performance in U Up? (Photo by Holly Renee.)

Review: “U Up?” at Dad’s Garage shows the pitfalls and magic of romantic entanglements

Comedians Mark Kendall and Alison Hastings satirize the search for love, sex and connection in the digital, social-media-driven world in their new show U Up? at Dad’s Garage, running through February 17, with a special (appropriate) showing on Valentine’s Day, February 14.

The show is a collection of short, fast-moving, independent sketches, and part of the fun derives from the rapid-fire inventiveness of the situations the two actors create on a bare stage. In one scene, they’re an overly nosy father and his independent daughter moving into her first apartment; then moments later, they’re a couple on a successful first date that ends with some epically awful music choices; then they’re a longtime couple arguing about the betrayal when one of them solo-binge-watches a TV show beloved by both (here, it’s akin to romantic infidelity, if not worse).

Hastings becomes Joan of Arc at the stake, an oversharing waitress and a needy fortuneteller desperately afraid her clients will leave her for the psychic next door. Kendall is a football coach going over the ins and outs of kneeling for the national anthem, a karaoke crooner and the ludicrously perfect catch, a puppy doctor, in a rom-com. My own favorite had the two as computer-programmed robots coldly enacting the various stages of friendship and estrangement.

The show has a raunchy edge, but it also maintains an appealing, overarching sense of innocent fun; there’s confessional release and freeing energy in its depictions of the humiliating situations that human lust, neediness and interdependence can get us into.

Somewhat paradoxically, the show is at its funniest and most inventive in its absurd flights of fancy, but at its most cohesive and interesting in its moments of emotional rawness and honesty, as when Hastings divulges her feelings about her own body. Director Kevin Gillese punctuates the short skits with music and lighting changes between the sketches during which the actors often dance. Wrapping up such a disparate and wide-ranging show seemed to be an understandable challenge; it’s handled reasonably — if not entirely — satisfactorily with the final skits fast-forwarding in a surreal and funny way through elements introduced earlier.

U Up? with its quick-fire jokes about app hook-ups, sexting, sado-masochism and late-night booty calls would seemingly make for a monumentally awkward first date, so it was surprising to see that most of the audience on opening night was made up of couples. And if I’m not mistaken, many of them were new couples. Anyway, they seemed to be enjoying themselves, and conversations over dinner afterwards were no doubt lively, honest and interesting. Maybe it’s all for the best. A relationship that begins with a good laugh about all the routes for human connection, humiliation, miscommunication and heartbreak will probably be a lasting one.