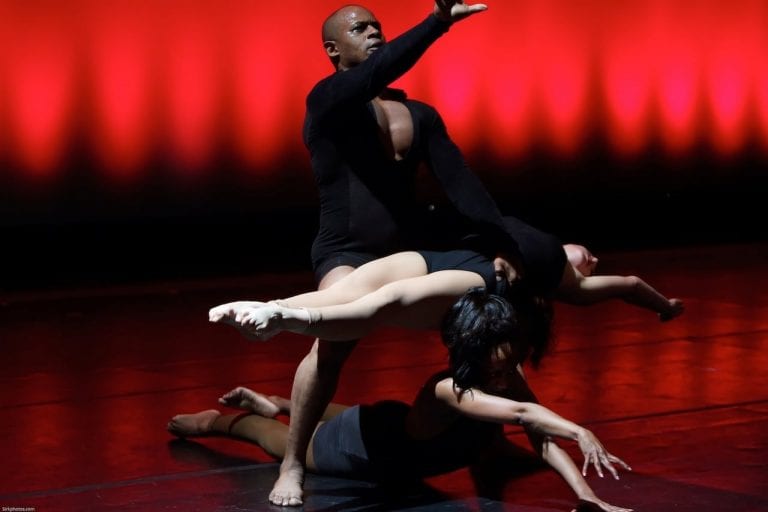 Preview: Another side of Ballethnic brings 9/11, Boko Haram kidnapping tragedies to dance

When Ballethnic performs in Atlanta, its hometown, the company usually presents ballets like The Urban Nutcracker, now in its 24th year, The Leopard’s Tale or other family-friendly pieces. But their performance on Saturday, May 7 at the Southwest Arts Center will show a very different side of the company with works inspired by two terrorist acts of global proportions: 9/11 and the abduction of more than 200 teenage girls by Boko Haram in Nigeria in 2014.

Each ballet is set on three dancers, and each is an intimate, personal response to an event that shocked the world. Also on the program are three lighter works, one of them an Atlanta premiere choreographed by the late Salvatore Aiello.

“Usually, we do upbeat, optimistic works that have a positive resolve,” says Ballethnic’s co-artistic director Nena Gilreath. “This program has a more downward feel. The social issues are heavy, but I think there is always room for us as artists to find a resolve, to keep hope alive, to use art to keep our humanity.”

The Third Side is the work of Detroit-based choreographer Paulette Brockington and was created for the 2015 Queens’ Calling Choreographers’ Showcase in Toronto. Brockington had planned to take an existing piece but then discovered the event had a theme: the Nigerian schoolgirl abduction. “At first, I was aghast,” Brockington says. “The topic was daunting. I wasn’t sure what I could do. I certainly couldn’t apply something already in my arsenal. I had nothing that was even close to it. So for weeks, I thought about it. [They] kept sending me emails asking for a description of the piece. For once I was bone dry. I finally latched on to a concept that was poignant in telling the story and also economical enough that I could take it on the road.”

The Third Side is a trio. One dancer performs the role of a Boko Haram abductor, one a teenage student, the third her mother. Brockington’s movement style draws on the revolutionary work of Katherine Dunham, the African American dancer-choreographer-anthropologist who in the 1930s went back to the roots of black dance and ritual and became a pioneer in the use of folk and ethnic choreography. “We felt The Third Side would stretch the dancers technically,” Gilreath says. Brockington is flying to Atlanta to attend the performance.

The Day the Sky Fell-911 is Ballethnic dancer-choreographer Savery Morgan’s response to the horrors of 9/11. When the planes hit the twin towers, he was “a spring chicken” in his 12th-grade high school class in Jacksonville, Florida. “I was late to history class that morning,” he says. “When I walked in and saw the TV, I thought it was a movie. I saw [a replay of] the first plane hit. Once I realized what was going on, I couldn’t handle it. I just started studying for a test.”

He later moved to New York and danced with the Dance Theatre of Harlem before joining Ballethnic. He and Gilreath went to the city last November to audition dancers and stayed at a hotel two blocks from the memorial to 9/11. When they walked through the site, Morgan was deeply moved. Like Brockington, he takes an almost incomprehensible tragedy and condenses it into an intimate trio, a story of three young women who set up a flower stall near the World Trade Center towers.

“As students, we all thought SATTO was remarkable,” Gilreath says. “The lifts were very tricky and different, and the partnering was intricate. It was ahead of its time.” Roscoe Sales, an alumnus of the North Carolina School of Arts, will perform the duet with Ballethnic’s Brandy Carwile.

Lifting the mood of this mixed bill is Adam L. McNight’s vocal rendition of The Circle of Life performed with the Ballethnic Youth Ensemble and resident choreographer Waverly T. Lucas II’s Waltz Tangall, which incorporates the rhythms of the waltz, tango and gallop, all performed to live percussion.

“It’s important for us as artists to know what’s going on in the world and not stay isolated in the studio,” Gilreath says. “This program will stretch our dancers in that way.” It will also test Atlanta audiences and allow them to see another side of this 26-year-old company.