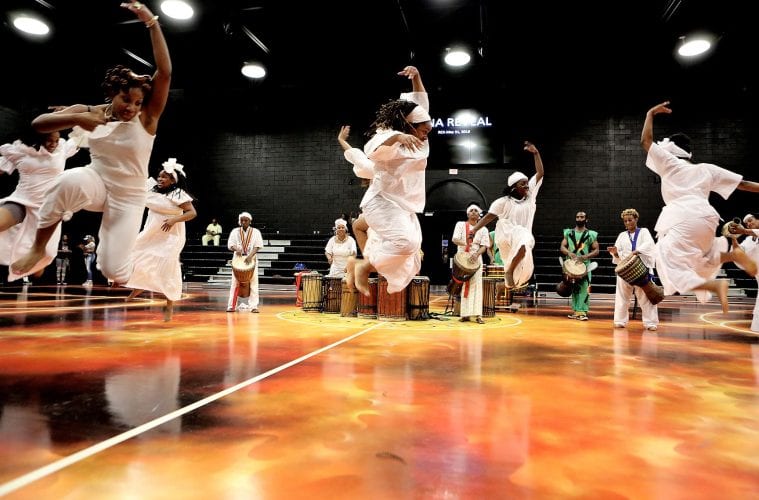 Preview: Giwayen Mata brings its dance of a different drummer to Spelman stage

“When Giwayen Mata first started, people were taken aback by the fact that we, as women, were drumming,” says Omelika Kuumba, founder and artistic director of the Atlanta ensemble. Giwayen Mata performs Sunday at 3 p.m. at Spelman College’s Baldwin Burroughs Theatre. The sold out performance may have some tickets available at the door.

The drums these women play aren’t just any drums. They play the West African djembe, a skin-covered, goblet-shaped drum that’s loud and versatile and played with bare hands. It was little known outside Africa before decolonization and is traditionally played by men; the women created the rhythms for their dances and taught them to the men who then played them on the drums.

“The drumming and movement are all connected,” Kuumba says. One of the first all-female percussion groups, Amazones — Women Master Drummers of Guinea, was officially created in Guinea in 2002, nine years after Kuumba founded Giwayen Mata in the United States. It’s no surprise, then, that Kuumba takes great pride in her all-female ensemble and the works it has created and performed over the years. “More women have begun to drum, but a lot of people tell us ‘I never knew women played like that,'” she says.

According to the Malinke people of West Africa, a skilled drummer “can make the djembe talk” and tell stories, which is what Giwayen Mata does so well. Their concerts are a blaze of sound, rhythm, color, movement and storytelling, always from the woman’s point of view: Sunday’s concert is titled “This Mother’s Daughter” and is a selection of new and old works. 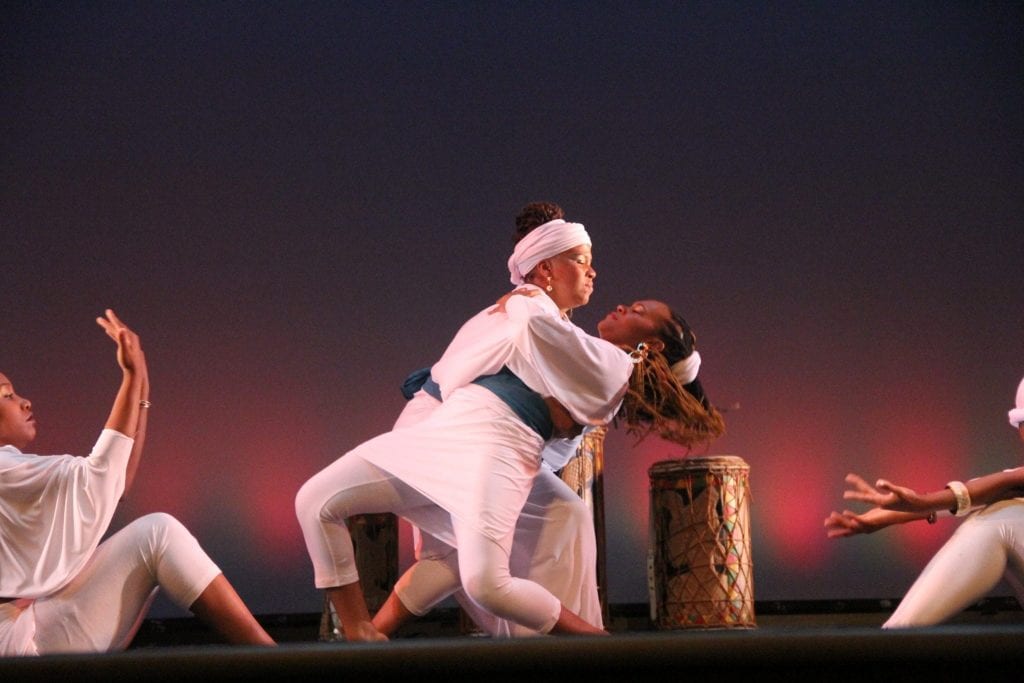 One piece features a danced libation, a traditional calling of the names of ancestors, in this instance women. Traditionally, libation is a pouring of liquid, often water, onto the earth, a plant or a tree, water being life’s elixir. “We ask for their energy to come forward to bless the occasion,” Kuumba says. “We honor them by recognizing them; we affirm that they will be pleased with what is about to take place. The earth is where we get our nourishment and where we return, ashes to ashes, dust to dust.”

Contributing to this section of the program is Dianne McIntyre, a dancer, choreographer and teacher whose career spans theater, film, television and concert dance, earning her an Emmy nomination and three Bessie Awards (the dance world’s Oscars). In the late 1970s and 1980s, her Sounds in Motion studio was the only modern dance studio in Harlem. McIntyre is the 2015-16 Distinguished Visiting Scholar at Spelman and involved in several arts events there. In this concert, she is developing movement for the dancers for a story and concept created by Kuumba. The two of them met last year when Kuumba played drums for one of McIntyre’s movement classes at Spelman.

The program’s Trials & Triumphs tells of women’s experiences as “caretakers who must remember to care for ourselves,” Kuumba writes, as they walk to the rhythms of “different drums” — as friends and wives, daughters and mothers. The multi-generational concept will come to life when Giwayen Mata’s apprentices and other young dancers join the company on stage. The event also features a marketplace, silent auction, and opening VIP reception with live entertainment.

At 56, Kuumba is now one of the elders in her community. “This is an interesting time for me as a woman and as an artist,” she says. “I am grateful that my mother is still alive. I feel her encouragement. We have a special bond. She’ll be at the concert. But I have grandchildren now, and most of the women in the company are younger than I am. I identify more as a mother than a daughter because of my responsibility to my family and my company.”

She takes her role as elder seriously and talks about the impact dance and drumming can have within the community. “Just the physical activity of dancing and sweating and drumming provides a healthy and necessary release, especially when we are doing it with other people,” Kuumba says. “It provides a personal and a community healing. When people see us, they have similar experiences. They see how we enjoy being together and joy itself is healing, it’s uplifting.”