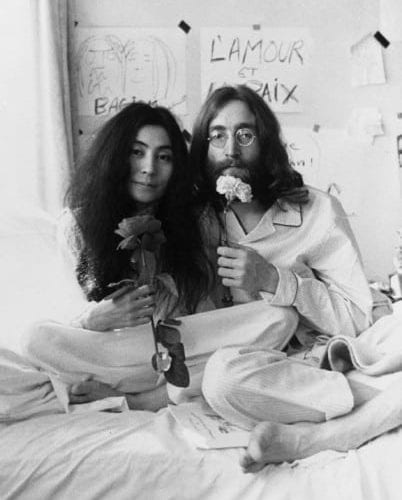 For some, Yoko Ono will never be an artist in her own right, forever eclipsed by her husband John Lennon’s fame.

But Ono was a noted conceptual artist before she met Lennon. She was aligned with the avant-garde Fluxus group of the 1960s (though Ono preferred to work independently and never officially joined Fluxus), which created performance pieces and films with the kind of intellectual rigor that makes for lasting art.

Atlantan Andy Ditzler will show an impressive five-night lineup of rare Yoko Ono film works (courtesy of the Museum of Modern Art) from March 25 through April 8, as part of his ongoing “Film Love” series dedicated to avant-garde and experimental work. “Reality Dreams” will play at venues including the Plaza Theater, Emory and the Atlanta Contemporary Art Center. The Film Love website has the details.

Highlights will include Ono’s film of her frequent collaborator Lennon smiling in 1968’s “Smile” and a selection of films she made during her association with Fluxus. The works range from the whimsical in the case of the 1966 “Bottoms,” a roundelay of perky posteriors, to the grueling, painful “Rape,” a prolonged examination of female passivity and fear in the face of suggestive violence. The April 1 screening at the Atlanta Contemporary Art center will include an opportunity for the audience to participate in Ono’s “Film Script #3,” in which audience members are instructed to cut away any part of the image on the screen that they don’t like.

Created for Austrian television in 1969, the 77-minute “Rape” (March 26, 8 p.m., Emory University, 206 White Hall, to be shown alongside 1965’s “Cut Piece”) originated with Ono’s spare instructions for a film: “A cameraman will chase a girl on a street with a camera persistently until he corners her in an alley and, if possible, until she is in a falling position.”

But intention is one thing and outcome quite another. What reads on the page as a conceptual exercise becomes, in reality, something far creepier and more sinister, a strange exercise in cruelty, especially when considering its origin in a female and feminist artist’s mind. It is justifiably called, by “Village Voice” film critic J. Hoberman, “one of the most violent and sexually charged movies ever made — even if flesh never touches flesh.”

Ono’s cameraman, Nic Knowland, found his prey in Hungarian-born Austrian tourist Eva Majlata, residing in London at the time. With her long blond hair and pretty features, Majlata bears a striking resemblance to American actress and “Mod Squad” starlet Peggy Lipton. Dressed in a long fur coat, a woven bag on her shoulder, her eyes ornamented with strange black slashes below her eyes, like lashes drawn on a rag doll, Majlata is, perversely, a lovely visual object in Ono’s commentary on voyeurism and control.

When the film begins, she is strolling through London’s Highgate Cemetery, a setting that immediately establishes the film’s sweaty, horror-movie ambiance. The fact that Majlata speaks very little English and was living in England illegally adds immeasurably to the panic waves of caged-animal entrapment she gives off during the course of the film, as it proceeds to the confining prison of her apartment. Adding to the wall of Kafkaesque frustration is her inability to communicate with cameraman Knowland. She tries German. She tries Italian, a switch that suggests she may have needed to employ Italian in the past to similarly ward off harassment.

Viewed today, “Rape” looks remarkably contemporary, like a conceptual horror film with shades of both Darren Aronofsky’s “Black Swan” (especially in its strikingly similar point-of-view shots of the back of Majlata’s head) and Roman Polanski’s “Repulsion” (1965), about another pretty blond foreign girl living in London and assaulted by a string of blokes. Like Michael Haneke’s similarly sadistic “Funny Games” (1997, 2008), “Rape” is an exercise in slowly building horror that begins with Majlata’s laughter, changes to disbelief, then irritation, then something you could characterize as terror. For some viewers, knowing that this is not fiction but — at least from Majlata’s point of view — reality can instill an excruciating sense of being complicit in her harassment.

A lighter, groovier exercise in high-hippie conceptualism, 1969’s “Bed-In” (screening March 25, 9 p.m., at the Plaza Theater alongside the 1970 short “Apotheosis”) is a delightful lark from perhaps the most famously creative couple of the ’60s. Lennon and Ono, dressed in saintly white, hunker down for a week in their Montreal Queen Elizabeth Hotel room, where they receive a string of visitors from nobodies to Timothy Leary and Tommy Smothers. In their whimsical fashion — despite all the heavy political talk — the couple stage a protest of the horrors of the Vietnam War raging at the time.

The bed setting (the first “bed-in” was performed over the course of a week in Amsterdam) seems to get people into a whispery low note, confiding, “rapping,” pontificating, sharing time with the famous couple, basking in their 15 minutes. The final group rendition of “Give Peace a Chance” is a burst of childlike wistfulness. Both cloyingly self-conscious and packed with the kind of earnestness rarely seen in our irony-infused present day, “Bed-In” is ultimately a poignant, bittersweet look into a far more idealistic time, when people believed with all their heart that they could change the world.