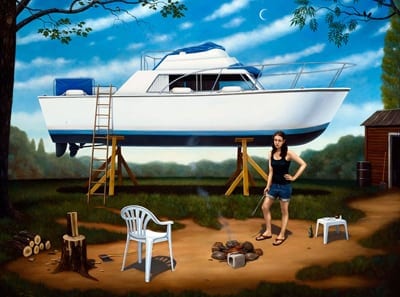 There’s so much going on in “The Contemporary Figure: New Trends in Narrative Painting and Sculpture” at Swan Coach House Gallery, such an overwhelming cacophony in the show’s exploration of the figure as an expression of interior states of mind, that viewers would be forgiven for feeling a little overstimulated. I left needing a cold compress.

Between the frenzied color schemes of Stephanie Jackson’s magical realist paintings, the visual delirium of Art Rosenbaum’s wonderful rendering of the explosive mindscape of Howard Finster’s Paradise Gardens, and the thespian effusiveness of Kirsten Stingle’s New Agey ceramics of despondent girl-Pierrots, the overarching impression is of a curator with a good idea veering into the overkill zone.

Some of the artists on view become more interesting within curator Marianne Lambert’s framework. Tony Hernandez, one of Atlanta’s wonder-boy successes, looks timid next to the hysteria surrounding him. His prototypical child figure in “Message Board” is captured in a sea of empty space. The child suggests a kind of alter ego or displacement of the artist, dwarfed by an enormous unpainted universe, the dilemma of every artist creating work within a vast expanse of possibility.

Always a standout, Meg Aubrey’s work, which at times can feel emotionally remote, here looks positively fervid and as psychological as filmmaker Todd Haynes’ “Safe,” in part because of Aubrey’s piquant, mischievous point of view. In “Lost” (at right), she has captured one of her typical sunglasses-shrouded suburban warriors clutching frou-frou gift bags, lost in a terrible sea of her own creation: a parking lot filled with SUVs. Her confusion — or perhaps it’s blind panic (her glasses reveal nothing) — is captured in the enormous frame of an SUV’s side mirror, which further mocks her plight.

Where Aubrey captures suburban angst and the existential wail of parking lots and cul-de-sacs, Terry Rowlett’s endearingly weird narrative paintings — a kind of lower-boil fabulism suggestive of local Charles Keiger — propose a hipster mind-scramble in his portraits of the black-clad set adrift in portentous landscapes littered with ravens or promising biblical rain showers.

Rowlett’s “Awaiting the Flood” (at left) is what happens when biblical lore and hipster DIY collide. The painting captures the kind of non-sequitur encountered on many a gambol into the Southern countryside: a cool young woman cooks over an improvised grill in a back yard ornamented with felled trees, plastic chairs and a brand-new boat propped on stilts in anticipation of some deluge.

The painting, both matter-of-fact and surreal, is on the subtler end of the spectrum on display here, which also accommodates the more floridly weird and apocalyptic work of Scott Belville, who shares a similar interest in the dire prophecies of old-time religion.

Overall, a little psychology rendered on canvas and in clay goes a long way. “The Contemporary Figure” doles out massive portions. There is some splendid work and some that is so overwrought it makes the covers of paperback fantasy novels look understated. Through April 16.