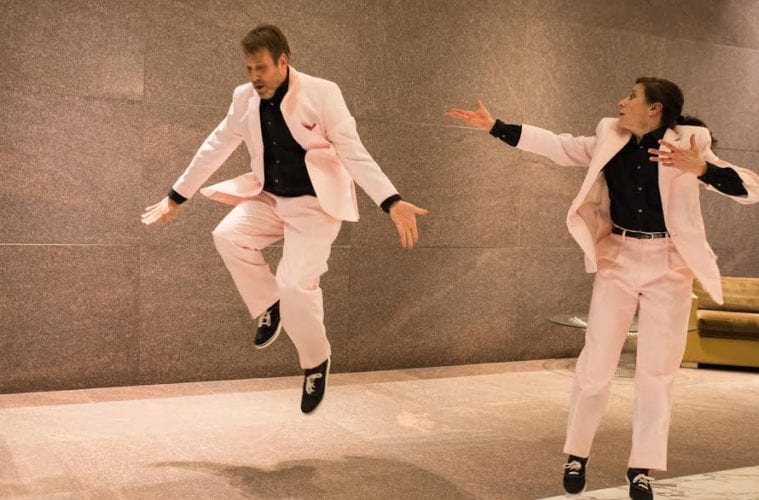 Preview: Pink suits and kazoos featured in duet by Catellier and O’Neal at MAD Festival

Art, life and humor will converge in Nostalgia for a Future Past, a duet cocreated and performed by Gregory Catellier and Kristin O’Neal. The work will appear during this year’s Modern Atlanta Dance (MAD) Festival, which takes places Friday and Saturday at the Balzer Theatre at Herren’s.

“The characters in Nostalgia for a Future Past seem like contemporary vaudevillians who perhaps are ‘has beens’ or maybe they never reached their potential,” says Catellier. “There are elements of play and an old-timey sensibility to the piece. Those ideas coalesced and the title popped out fully formed.”

Originally commissioned by CORE Dance last February, the work was first performed at Off the EDGE festival at the High Museum and 55 Park Place. “We took inspiration from the spaces that were available at both locations,” says Catellier. “Each had a couch and a table. We began to imagine a couple in their home ‘rehearsing’ a dance. The other inspiring element is that the High Museum is a ‘high-art’ institution. We decide to subvert that by making something that’s fun, humorous and doesn’t take itself too seriously — pink suits, kazoos, pop music.” When asked more about the music, he replied, “I’ll just say that we practice our whistling every day.”

When CORE’s artistic director, Sue Schroeder, commissioned the work, she made it clear that she wanted Catellier and O’Neal to develop the piece together, which was a first for the two artists. “We’ve been working together for some time, but we had never shared the choreographic mantle,” says Catellier. “At the time, Kristin was teaching at the University of South Florida. She would come home to Atlanta on the weekends and we would have marathon rehearsals. For the most part, the piece came together quickly and intuitively, which is unusual for both of us. We would ping-pong structural ideas, but often came up with our individual movement vocabulary.”

Filming themselves while choreographing also helped facilitate the creation process. “There was a lot videoing involved,” says Catellier. “We would try a sequence of events, look at the recording, then try again with some tweaks. Slowly, we refined each choreographic event.”

As far as choreographic styles, Catellier and O’Neal share characteristics in their approach to movement, though they are usually drawn in different directions when it comes to subject matter. “We both believe in a grounded sense of weight and a free flow of energy,” explains Catellier. “Line is less important to us but musicality often drives movement invention. Given the choice, Kristin makes works deeply steeped in characters and is currently creating a suite of dances based on her great aunts. I tend to choose big themes, like time or space, and explore them with a group of collaborators creating multi-layered works that employ design, film, and dance.”

Catellier says that he and O’ Neal are still discovering more about Nostalgia for a Future Past as time goes by. “Even after a year and several performances we are still identifying the characters, who are really just versions of ourselves,” he says.

The MAD Festival will also include a premiere by founder Douglas Scott, who started the event 23 years ago to fill a void created by the dissolution of the Atlanta Dance on the Loose festival. His physically integrated company, Full Radius Dance, will present Unicorn, which he describes as a “layered, meditative work inspired by the unicorn tapestries in the collection of The Cloisters in New York City and ‘The Lady and the Unicorn’ in the collection of Thermes de Cluny in Paris.”

For its annual Pioneer of Atlanta Dance Award, the festival will honor Robert “Bobby” Barnett and posthumously honor his wife Virginia “Ginger” Barnett. Bobby was Atlanta Ballet’s second artistic director from 1963 to 1994, and Ginger Barnett was a principal dancer with the company, served as associate director and helped establish the Carl Ratcliff Dance Theatre. Both were members of New York City Ballet during their performing careers.

Scott recalls a particular memory of Bobby Barnett that he came across while updating old videos of Full Radius Dance for the company’s 25th anniversary season this year. On a tape labeled “Atlanta Ballet Open House,” he discovered footage of Barnett introducing Full Radius Dance before they performed a demonstration of physically integrated dance at Atlanta Ballet’s former studios at Peachtree and Pine streets. “It was lovely to have his support,” Scott says.