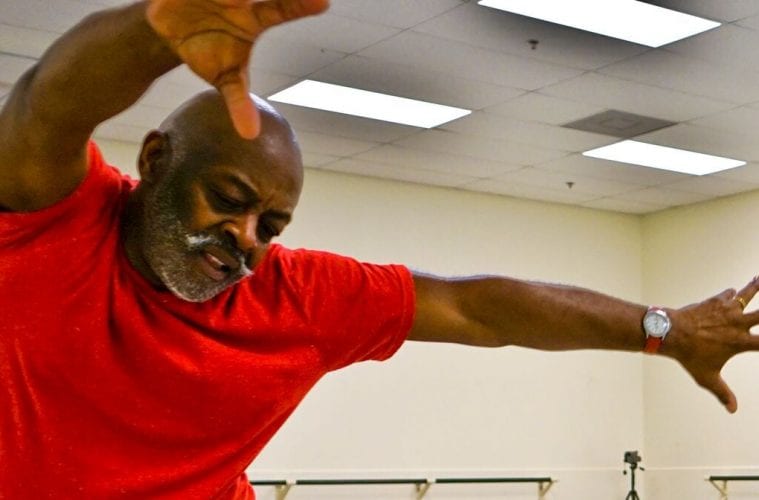 Preview: Noted choreographer Otis Sallid brings it home for “CHIAROSCURO: A Light in the Dark” at MAD Festival

The influence of the great 20th-century dance masters pops up in surprising places. Take, for example, a Coca-Cola commercial where a man dances in silhouette against a red-lit vending machine; in just a few shots, choreographer Otis Sallid tells a story. There’s a similar economy of means in Brooke Shields’ spirited dance that opens season four of her television series Suddenly Susan. And in Spike Lee’s film Malcolm X, a rich narrative underlies Sallid’s raucous Lindy hop swing dance.

For about four decades, Sallid’s knack for storytelling — developed under the tutelage of such masters as Martha Graham, Anna Sokolow and Eleo Pomare — has fortified a career that spans concert dance and Broadway stages to choreographing, directing and producing with some of our generation’s most celebrated artists of dance, music, theater and film.

Sallid has returned to his artistic roots with CHIAROSCURO: A Light in the Dark. Performed by 13 Atlanta-based dancers, the narrative contemporary ballet will receive its premiere at the 22nd annual Modern Atlanta Dance Festival — running June 3 and 4 at the Balzer Theater at Herren’s. CHIAROSCURO is one of eight programmed works by established companies and independent choreographers chosen to showcase the diversity and excellence of the city’s dance scene. On Saturday night, the MAD Festival will honor Mozel Spriggs, Spelman University professor emeritus of drama and dance, with the second annual Pioneer of Atlanta Dance award.

Last year’s MAD Festival signaled a continuing rise in standards among local dance artists, and Sallid is carrying those impulses even further. It’s in the details, Sallid said, and the only way to understand how this process happens is by watching him work with these local dancers. They rehearse evenings and weekends at the Decatur School of Ballet’s Sams Street Studio, in the community where Sallid and his family have lived for the past several years because it offered the best fit for their daughter’s high school education. CHIAROSCURO explores the idea of seeking the light in a darkened world. Sallid’s story takes place in a post-apocalyptic setting; a village that exists without light, and so without intuition or hope. Anicka Austin dances the role of Kadaresh, a village healer who wanders into the forest, where she discovers light for the first time.

In one rehearsal, a few long, lonely notes played on a trumpet resonate through the room like shafts of sunlight filtering through a forest canopy. On seeing the brightness, Austin drops down and retreats; then languidly, she opens her shoulders and chest toward its warm glow and grasps at an elusive ray. “Feel the sun on the palm of your hand,” Sallid told her. “Let us feel the light.”

Kadaresh is eventually joined by her lover, Enos (Daniel Lopez), and they will take the light back to the village — a decision that will have unintended consequences.

The story is a metaphor for seeking truth in a muddled world of confusion, greed, ignorance and deception. It’s a topical subject, Sallid said, “about the world we are in, and who we are as people, all around the world, especially in this country. We want to always seek truth, and not non-truths.”

To get at this truth, Sallid has called upon the influence of some of his earliest dance teachers — such as Pearl Primus, pioneering scholar and artist of African and African-American dance; Jean-Léon Destiné, deemed father of professional Haitian dance. Sallid also worked with Anna Sokolow, whose choreography delved into intense human feelings, and Eleo Pomare, noted for distilling emotion in works that often expressed social protest. At the Juilliard School, Sallid worked with choreographers Martha Graham and Antony Tudor; all of them were explorers of the psyche, with deeply human messages.

“We function from either of two emotions: fear and love,” Sallid said. “That’s it.” In a high-pressure setting, he might think to himself, “Is she afraid? Okay, well, let’s put some love around her, and make it work.”

The story is also a metaphor for Sallid’s own artistic journey — he hasn’t choreographed this kind of concert dance in decades. “I’m shedding light onto my darkness,” Sallid said. “It’s personal.” Sallid has worked with artists as varied as Mariah Carey, Faith Hill and Spike Lee.

Sallid got a flash of inspiration in 2013, when he joined with New York’s Apollo Theater to produce a dance tribute to music icon James Brown. Sallid traveled to France and Germany to see contemporary dance companies from around the world. He exchanged ideas with artists and companies as diverse as William Forsythe, New Zealand’s company Black Grace, and contemporary dance artist Aakash Odedra. Soon after, a feeling came over Sallid — he had to choreograph for the dance world again.

Fast forward to the winter of 2015, when Sallid met Atlanta-based dancer and choreographer Morgan Carlisle for breakfast at Amélie’s French Bakery. Carlisle asked Sallid if he would have time to mentor her. Sure, he said, but his agreement came with a condition: Could she help him find a dance space where he could create new work?

Carlisle connected Sallid with MAD Festival creator Douglas Scott, and took on the job as supervising producer for Sallid’s project. She helped organize a weekly community class. The Decatur School of Ballet offered them free use of studio space.

Sallid cast the work out of people who came to class — not necessarily the strongest technicians, but a multicultural cast of performers, ages 18 to 80, whose ethnic backgrounds, body types and training levels varied.

“In this particular work, I wanted them to look like real people,” Sallid said. He’s aiming to reach an audience of everyday people — people who respond to storytelling through dance. Sallid chose performers who could internalize sensory imagery, ideas and feelings — an acting skill that many dancers aren’t asked to develop. But it’s crucial if you’re going to tell a story.

And this requires careful direction and hours of rehearsal to refine and strip away until the true art emerges.

In the studio, Daniel Lopez enters the space. He is Enos, Kadaresh’s lover, searching for her in the forest. Long, lingering notes on cello and double bass sound courtly, mythic and mysterious. The couple exchange supports. Austin arches over Lopez’s back. He hinges backward, laying his torso toward her as she cradles his head.

“You’ve got to be enraptured by it,” Sallid tells Lopez. “You know what I mean? It’s too — by the numbers.”

The next time he runs the duet, Lopez moves more fluidly and organically. There seems more trust between him and Austin. Sallid mentions Antony Tudor, who would say, “You always touch your partner when you’re partnering. Even when you’re walking, you touch them all the time.”

“These are the secrets, but it takes time to learn them,” Sallid said.

After rehearsal, Austin, who choreographs independently, reflected on working with Sallid. “It’s a beautiful process, the depth of the storytelling, the care in all the character development,” Austin said. She noted Sallid’s way of illuminating character while drawing out the performer’s individual qualities. “It’s the choreography he’s making, but it looks like what we do. It’s been amazing to get information from somebody and (to have) such a huge allowance of who you are, inside of the work.”

Lopez said he grew up playing sports, and he always loved freestyle dancing; he even performed half-time shows at his sports events. But he saw, in certain performers, the ability to draw people in — something he always wanted to do, but didn’t know how, until he began working with Sallid. The director took time to ask Lopez basic questions, at every moment: “Why are you here? What do you want?”

A couple of spots felt empty and hollow, until Lopez found his intention. Suddenly, his dancing movement had more depth, and he could feel people around him reacting to it. He felt afraid and a little bit exposed. “But I found that when you just allow that to happen, it’s a beautiful thing. Especially if it’s all on stage in front of a whole bunch of people — to be vulnerable in front of everybody — it’s like you’re awake. It’s a big deal. It’s really hard to explain.”

Whether Sallid is directing Brooke Shields or Mariah Carey, he uses these same methods. “It’s the same process, whoever you’re working with,” Sallid said. “Sharing, giving. It’s egoless, and you want to have a nurturing environment, all the time.”

While Sallid has projects simmering in New York, he aims to develop CHIAROSCURO into an evening-length performance for 14 dancers. The process will require money and time — things that are hard to come by in Atlanta, where dance artists often produce work on shoestring budgets, funded by smallish grants and part-time jobs. Nonetheless, Sallid hopes this community that’s growing around CHIAROSCURO can carry modern dance in Atlanta out of the hobby level into the professional world.

He thinks back to some of the dance companies he saw in France and Germany — Black Grace, for example, which started in a similar way. Eventually, the New Zealand government saw the company’s cultural value and made it a national treasure.

“Their work is beautiful,” Sallid said. “You start out like this. You do honest work, and tell honest stories, and try and look for repertoire. There’s a lot to it, like, the rigor of going over and over and over, not leaving any stone unturned. It changes the work, changes the dancer, changes the culture, changes everything.”