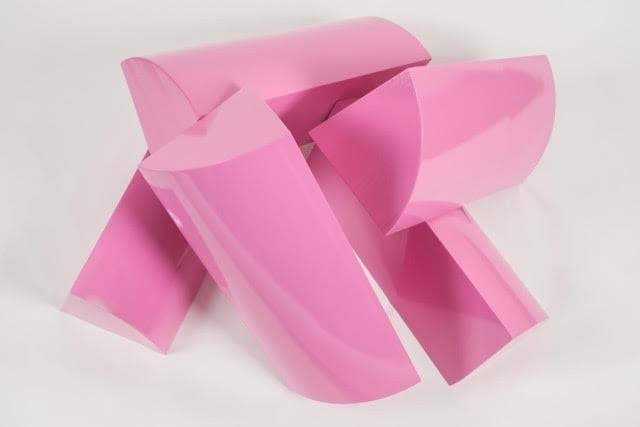 Review: the rose-tinted world of “Happiness Project” at Whitespace

On view at Whitespace through June 18, Happiness Project is a multimedia show by Didi Dunphy that is ambitious in its theme and its scope of materials. Undoubtedly, one of the most salient aspects of the exhibition is Dunphy’s unfaltering sense of design as she moves deftly from medium to medium; her chosen materials include photography, video, sculpture, jewelry, embroidery, and nail art. That said, the show’s glossiness might suggest an uncritical, breezily pro-consumer stance; however, Dunphy’s exploration of happiness has factors at work that prove play is a nuanced and worthwhile endeavor. Notions of gender, art history, and fulfillment are among her concerns.

A reference to the modern Arco lamp, “Industrial Emoticon” is a pristinely crafted object that encapsulates the concerns of Happiness Project. A block of white Elberton marble anchors a steel rod from which three large forms are suspended hangman-style: a smiley face, a cloud and a heart. Made in bright, translucent Plexiglas, the forms project colored shadows onto the gallery’s white walls. Of course, the translucency of the forms could be a metaphor for the insubstantial nature of such communication, but such a reading is likely off point. Situated at the top of “Industrial Emoticon,” and close to average human height, the large smiley face gives the sculpture an anthropomorphic quality. The smiley face, arguably one of the most ubiquitous and predictable symbols whose overuse predates the emoticon, here seems totemic — an apt and potent icon for the present.

True to its title, “Picket Fence” is perhaps the most unambiguous icon of Americana. Here, though, it is rendered taffy pink and adorned — or, better put, bedazzled — with large cubic zirconia gemstones. Meaningfully, it is not a white picket fence; rather its color suggests the possibility of deviation from the standard vision of family, contentment and home. Further, the fence’s basic function to demark space is negated; rather, Dunphy’s “Picket Fence” functions as a blatant signifier of domestic bliss. The picket fence motif reappears in “Twins: Picket Fence,” as a sterling silver tiara. Its companion, “Twins: Chain Link Fence,” is a grittier variation on the theme. The picket- and chain-link motifs are described as made for country and city living, respectively, in Dunphy’s statement.

Conjuring notions of campfires and hearths, “Fire Logs” is a pile of pink enameled wood blocks stacked as if ready to kindle a fire. The work alludes to Donald Judd’s work of the 1960s in which he created industrial-looking objects that blurred the line between painting and sculpture. Dunphy’s sculpture suggests warmth and communal gathering — a far cry from Judd’s cool critique. Further, pink suggests socially constructed femininity; fire suggests transformation. Considered together, it seems Dunphy’s purpose is to dismantle aspects of minimalism, namely its machismo and gravitas.

Dunphy crafts a similar critique in a series of false nails collectively entitled “All the Things I Can’t Live Without: Nails.” Organized in varying arrangements, each set features a unique surface design with references that range from Hello Kitty to Mondrian to Takashi Murakami as if to suggest a position that is both pointedly egalitarian and anti-hierarchical. The meticulous craft required to paint on the tiny, curving forms of the false nails calls attention to the fact that such work is rarely, if ever, given recognition. Arguably, this is due to associations with femininity. The scale is reminiscent of miniature portraits often made by European female painters of the past. More significantly, manicures and pedicures are work often done by women for women, and issues of race, taste, and class seem germane. Women of color are often associated with opulent nail art; indeed, Dunphy’s wild patterns seem to invert and transcend standard “tasteful” (read: white, upper-class) manicures even while appropriating standards of highbrow Western culture such as Mondrian’s High Modern art. Dunphy’s riff on modernism — part homage, part critique — continues in her series of embroidered samplers with bright, geometric designs reminiscent of the art of the mid-20th century. Crucially, her choice of a medium situates her work as self-consciously gendered and works to elevate the status of craft.

“QVC: a journey through the shopping network,” continues the theme of bodily adornment as a means of seeking happiness. The series of images consists of 24 close-up portraits of rings photographed in Dunphy’s signature pink. Each is  printed on a sleek metal whose edges take various shapes such as hearts and clouds.

Dunphy’s ability to capture the appeal of such objects resonates with Jeff Koons’ work of the late ’70s and early ’80s. Indeed, just as Koons capitalized on the near-mystical appeal of brand-new consumer items, whether they be a basketball or vacuum cleaner, Dunphy likewise showcases the ability of objects to seduce through the immersive lull promised by hours of shopping.

A looping series of short, non-narrative videos depict dreamy sequences: girls cavort in the ocean surf, people in fairy costumes play in nature, a woman’s ponytail sways in perfect rhythm, flowers undulate in the wind, and carousel horses spin in circles. One video alternates between crowds of college girls in patterned sundresses and close-ups of rippling gingham fabric as if to suggest the pleasure of being immersed in a crowd. Altogether, the looping shorts have the quality of rococo fête galante scenes—visually pleasurable fantasies made to entice the viewer.

Dunphy’s project continues in Whitespec, Whitespace’s smaller auxiliary gallery. For “Bright Board,” viewers are encouraged to take a colored peg and insert it into a large colorful grid. Based on a kid’s toy, the work invites viewers to participate. Indeed, the artist cites the importance of Swiss psychologist Jean Piaget’s theories regarding play as well as the influence of the events of the 1950s. My experience of coming to the gallery on a quiet day, however, made the experience quiet, solitary, and contemplative. I was left more potently with a feeling of nostalgia than amusement, recalling the excitement such objects once inspired. Of course, play can be serious business that teaches impactful lessons.